What ever happened to Valeri Salov?

Not many talk about Valeri Salov these days. He has completely stopped playing competitive chess. And I think it is a great tragedy for modern chess-not just because Valeri Salov was , in my opinion, the strongest player in the world in the mid-90’s-but because he was pushed out of chess. He was a stronger player than both Kasparov and Karpov in the mid-90’s. In 1994 Valeri won, back to back, both Tilburg and the Najdorf Memorial. In the latter, a double round tournament , he defeated Karpov with both colours! 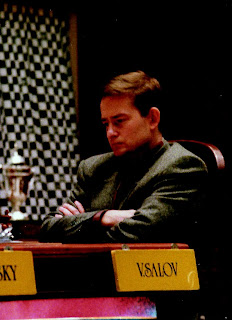 I first met Valeri in St.John in 1988. He was a clean cut young man, did not drink alcohol, and was reserved and thoughtful. And what a great player! I could tell that he was going to become a truly great player.
Wiki pedia gives the following entry:
Valery Salov (born May 26, 1964 in Poland) is a Russian Grandmaster. Awarded the International Master title in 1984 and the Grandmaster title in 1986 he was World under 16 Champion in 1980and European Junior Champion in 1983-84. He finished 1st= with Alexander Beliavskyin the 1987 USSR Championship but lost the play-off match (+0, =2, -2) gaining the Silver Medal. At the 1988 USSR Championship he finished 3rd= with Artur Yusupov, behind Anatoly Karpov and Garry Kasparov.
Salov qualified twice for the Candidates Tournament for the World Chess Championship. In 1988, he reached round of 16, but was defeated in his first match by Jan Timman (+0, =5, -1).


His best result was in the FIDE World Chess Championship 1996. He qualified for the Candidates, and won his first two matches against Alexander Khalifman and Jan Timman, to reach the final 4. He then lost at the semi-final stage to Gata Kamsky.
He has not played any FIDE-rated tournaments since January 2000.

After 1988 , Valeri went from one success to another , and by the mid-90’s he already had a 2700-plus rating. His play seemed to be a combination of Fischer and Karpov. I remember watching him play in a team tournament in Barcelona in 1993: wearing a three-piece suit, playing a delicate knight ending, complete self-control and amazing concentration. I thought to myself ‘Now there is the next world champion!’
But unfortunately, becoming world champion is not easy. Why should it be? There is so much talent out there! Salov stumbled against Kamsky , and from that point on his career took a sudden turn. He started to get less and less tournament invitations! He complained in the media that both Karpov and (mostly) Kasparov were trying to kill his career and were blocking his participation in big -time chess. Valeri was an opinionated chessplayer (there are many elite Grandmasters who like to talk only of themselves) and Valeri talked of what was wrong with modern chess, of the problems in FIDE and especially of the mediaeval attitude of Kasparov towards his colleagues.


Some say that Valeri spoke too much and too freely and that he was too critical of those with power and influence in the chess world. That he made too many enemies. Valeri, however, tried to make positive changes in FIDE and he tried to organize his fellow players so that their rights would be protected. He was not interested primarily in his own interests, and he believed that the many problems with modern chess could only be tackled by democratizing the established chess hierarchy.

But , mostly I think Salov was punished because his competitors became jealous of his chess ability.

I remember being Alexi Shirov’s second during the Dos Hermanas 1997 tournament. One day Salov had defeated Topalov in a long game where Valeri simply ground down Topalov with fine technique. (Salov had Fischer-type patience, super technique and was the fittest chessplayer on the circuit)

For the next few hours, Danailov (Topalov’s second) could be seen using the telephone in the Hotel lobby, calling as many organizers as he could, complaining about how boring and lifeless Salov’s style of play was! About how such a dry style kills chess as a spectator sport…
Gradually, Salov’s tournament invitations disappeared. Tournament organizers don’t want to invite controversial players unless their names are Bobby Fischer or Garri Kasparov. This is unfortunate, and shows how self-interests rule the world of chess today.

Here are some of Salov’s views on the chess world today (from his January interview):
”Chess has ceased to be a struggle of personalities or a struggle of ideas and has instead been transformed into a purely technical and boring work of remembering a large number of prepared opening variations. The human element in play is lost completely. I’ve tried to fight against it, 10-12 years ago it seemed to me that “Fischer’s chess” was a way out of the situation arisen. But I’ve understood then that it is difficult to change the way things are done.
”In this sense chess is a reflection of that what takes place in other fields of human activities. The creative element is less and present in the world! Chess reached this point 20 years ago. The best chess was produced long ago. Now a days the computer dictates how chess preparation develops. Players have become spectators.”

When asked about what players had most influence on him , he replied:

”My favorite… I cannot say, but the first whose games I studied was R-J.Fischer. His book “My 60 memorable games” influenced me very much. Fischer had an enormous influence on chess while he played. I also respect Bent Larsen very much as a personality. He played very interestingly, brilliantly, a man with outstanding intellect… a great rarity in the chess world today. ”