All the books below can conservatively be classified as  weird!  VERY weird. Curiously, the author is the same:  Carleton Mellick III  You can order these books from Strategy Games  (Discounts for juniors with ratings more than 999, providing they don’t tell their parents !)  Order now! 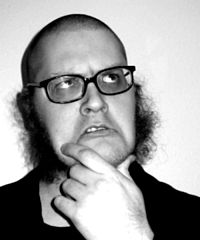 Carleton Mellick III’s work has been described as a combination of trashy schlock sci-fi/horror and postmodern literary art. His novels explore surreal versions of earth in contemporary society and imagined futures, commonly focusing on social absurdities and satire.

A tale of motorcycle-riding werewolf women in a strange post-apocalyptic wasteland.
They call themselves the Warriors, their enemies call them the Bitches. They are a gang of man-eating, motorcycle-riding, war-hungry werewolf women, and they are the rulers of the wasteland. Following his 2009 Wonderland Book Award-winning novel, Warrior Wolf Women of the Wasteland, Carlton Mellick III returns with Barbarian Beast Bitches of the Badlands, a collection of three interconnected novels that take place before, during, and after the events of the first book.

“I wish I could hope to ever attain one-thousandth the perversity of Robert Devereaux’s toenail clippings.” -Poppy Z. Brite Santa Claus is back. And flying beside him is Wendy, his freshly minted stepdaughter, who can peer into the future of selected children and offer them glimpses of the wonders ahead. But with that power come horrific visions of the turmoil and trouble the less fortunate among them are fated to suffer. Can Wendy and her stepfather prevent the suicide of Jamie Stratton in his teen years, as he grows up gay in a homophobic household and community? God the Father grants them three Thanksgiving visits to Jamie’s tormentors, in hopes of bringing about a change of heart in them and eliminating their ingrained prejudices. Beyond the challenge of rescuing one precious child lies the far more daunting task of expunging entirely this brand of bigotry from the human race, as Santa and Wendy strive to remake the world in compassion and generosity. Along the way, they enlist the aid of the Easter Bunny, a highly persuasive fellow indeed. But the Tooth Fairy and her loathsome imps are hell-bent on doing all they can to stop Santa and Wendy-nay, to heighten mortal fear and hatred of anyone whose orientation strays even the slightest from the norm.
____________________________________________________________________