The 7 Craziest Things Ever Done to Get Laid
You will enjoy this tongue-in-cheek humour  coming from the popular http://www.cracked.com/ site!  ”It’s no secret that most great accomplishments in human history made by men were done in the name of impressing the opposite sex. Men would not become astronauts if it did not afford them the opportunity to tell women at parties that they are astronauts.Yet, some men still find ways to go above and beyond — risking life, limb and country in the name of boobies.”

Horace Greasley was a 20-year-old Czechoslovakian hairdresser when Hitler invaded his country and he was forced to enlist in the army. It turns out cutting hair doesn’t translate well to fighting Nazis because Horace was immediately taken prisoner on his first mission and sent to a POW camp in Poland.

‘’They trained us to fight cowlicks, not fascism!”
Most people in this situation would be too distracted by the abject horror of being a Nazi prisoner of war to be on the lookout for the ladies. Most people aren’t Horace Greasley.
Greasley met Rosa Rauchbach — the young daughter of the quarry director of his labor camp — and they quickly fell for each other. Greasley decided fuck it, if he’s going out, he’s going out in style: by having kinky prisoner sex. But after almost a full year of salacious boning right under the Nazi’s noses, Greasley was transferred to a different camp, and that’s where this story goes from merely awesome to balls-out insane.

Yes, that’s Greasley staring down Heinrich Himmler. Turns out being the only one aroundgetting laid on the regular gives you a ton of confidence.

Greasley wasn’t going to let a couple of little things like the Nazi army and some shitty World War sequel get in the way of consummating his love. With the help of some buddies, he tunneled under the wire fence of his camp and tasted freedom. He could have easily hoofed it to the nearest neutral country and been done with the damn war, but instead risked everything to satisfy his carnal urges.
The cheeky Czech walked to Rauchbach’s camp, sneaked in, had a little sex and sneaked out again. Then he went back to his camp and sneaked back in as if nothing happened. He didn’t just do it once, either — he’d do this exact routine three times a week.

“It was that, or jacking it quietly into a sock for five years.”

Either he was insanely stealthy or the German guards were absolutely terrible at their jobs. It was like a real-life version of The Great Escape — if, instead of freedom waiting at the end of the journey, it was another prison … with a vagina inside. And they never caught him — the only thing that stopped Greasley from continuing the most dangerous sex regimen in history is the fact that World War II ended and he was set free. 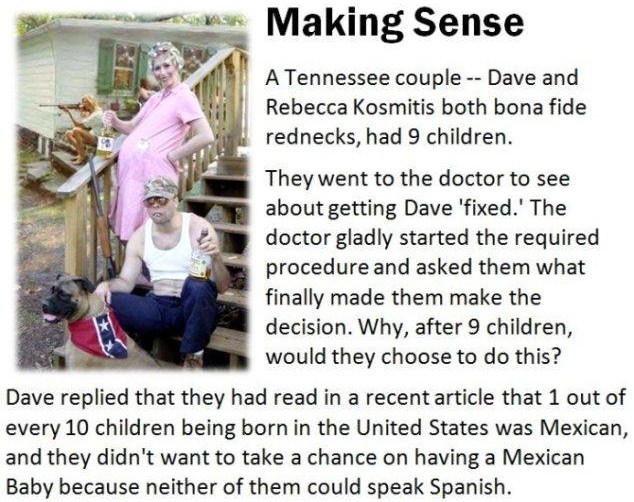 A woman visited a plastic surgeon who told her about a new  procedure called ‘The Knob,’ where a small knob is placed at the top of the  woman’s head and could be turned to tighten up her skin and produce the effect of  a brand new face-lift.
Of course, the woman wanted ‘The Knob.’
Over the course of the years, the woman tightened the knob, and  the effectswere wonderful, the woman remained young looking and vibrant.
After fifteen years, the woman returned to the surgeon with two  problems. ‘All these years, everything has been working just fine.  I’ve had to turn the knob many times and I’ve always loved the results.”
She continued: ”But  now I’ve developed two annoying problems: First, I have these terrible  bags under my eyes and the knob won’t get rid of them.’
The doctor looked at her closely and said, ‘Those aren’t bags, those are your breasts.’
She said, ‘Well, I guess there’s no point in asking about the goatee”

Don’t be in such a hurry.

A fan sends in her photo….such a pleasant smile!