You and I–and everyone else  in the world with a television set–are more and  more frequently presented REALITY as though  it was  mass entertainment.   I watched last Friday with morbid curiosity as the media once more went viral, reporting on the biggest manhunt in American history.  Boston was just like a Hollywood movie!  Every little detail was exaggerated out of proportion …
The PR had that pre-packaged shine  to it.   Obama ordered the entire city  locked down as people were advised to stay inside. He then sent in  9,000 heavily armed officers , each ready to use lethal force.
Washington’s spin doctors made it clear that they were in full control of our lives…We watched as this formidable army worked street by street, as heat-seeking helicopters hovered overhead. It went on all day.  We were told that it was incredible that a mere 19-year old–who infact was severely wounded– could evade capture for so many hours…

To keep us from getting bored, the media shamelessly  interviewed the mom and dad of the terrorist half a world away from Boston.  His dad publically called on his son to give up!  Even his  school acquaintances were interviewed!  By the time they captured Tsarnaev, the TV ratings had peaked and were already beginning to fall.  It is a good thing they captured him when they did…it avoided embarrassment all the way from Washington to Wall Street.
So, for now–atleast–America is a safer place.  Or we can pretend it to be…Yet one more  wanna-be masskiller has been stopped, and we spectators all  had great fun in the process.  More worrisome is that the bigger picture has not changed and , even worse, some desperate soul out there might want to lend meaning to his insignificant life  and become the next superstar.  All he need do is mindlessly kill as many innocent people as he can.
Except for children, ofcourse, there are fewer and fewer truly innocent people participating in this reality-entertainment game. Some time soon we will reap what we sow….perhaps that time is already upon us.
——————————————————————————— 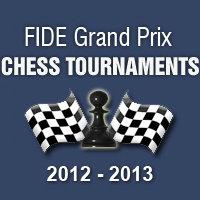 FIDE–since the advent of Kirsanism,  has a track record of excessive  optimism.  Over-flowing enthusiasm about creating a whole new chess world.  Over-night. With the snap of one’s fingers!… I have lost count how many times Kirsan Ilyumzhinov has made announcements of new corporate initiatives created by shell companies to revitalize the World Championship cycle.

They all come with the same story line, however.  ”Sponsors will line up to want to give their money to chess!”  So far, in the 18 years of Kirsan at the helm, not once has any serious sponsorship materialized, apart from the occasional government supported initiatives (Sofia, 2010 for example) or from a rich chess afficionados (Moscow, 2012) or ex-Soviet bloc oil companies, or  –as is the usual case–from Kirsan’s own very DEEP pockets.

The Grand Prix circuit–the latest tournament is in ZUG and started last week –apparently  has little–in anything –to do with Andrew Paulson.  This despite Paulson’s company having been awarded a decade-long contract giving him 100% control of all aspects of FIDE’s elite events!  As one can see from the Grand Prix logo above, the name AGON is not even in fine print.  Instead, the event is sponsored by a Russian Oligarch with controlling interests in RENOVA.
The popular website CHESS VIBES wrote last week about FIDE’s about face with respect to  Paulson.  Apparently the president of AGON had not even paid the deposit of 500k dollars that was part of the initial agreement with FIDE.  Nor had he succeeded in getting ANY sponsor for any of his events.  My readers will remember   that last month the promised tournaments in Lisbon and Madrid simply disappeared into the air.

Also according to ChessVibes, Paulson is presently in California looking for prospective sponsors.  One might assume that Paulson is trying to approach the big software giants, or possibly other Silicon Valley companies (Intel?)  If this is the case, then I think that Paulson will not have much luck: ever since Kasparov told INTEL  to take a hike in 1995, chess has been given the cold shoulder in California.
So where does that leave FIDE?  According to Nigel Freeman (in the ChessVibes article), FIDE has not yet made a final decision regarding AGON, but it has every right to consider their contract invalid …whenever they want to.
I will keep my readers up to date as developments take place….
———————————————————————————

The Alekhine Memorial has a great web page that my readers should check out.  Lots of really great videos of the tournament, photos and chess history.  Plus games.  And there is a large section carefully explaining the sponsorship.  Very classy!

Equally interesting is that the tournament will be played in two distinct venues: the first part is in Paris (Tuileries Garden) and the final part will be in St. Petersburg (Russian Museum).

It is good to see that the artistic/cultural side of chess is being explored instead of the ”chess is a sport” spin.

The tournament has just gotten underway and will continue for another week or so.  Only yesterday did I start to follow the games, and  Vladimir Kramnik’s play has impressed  me the most.  Or perhaps I should say that it is Kramnik’s pragmatism that has impressed me and has–once more– set him apart from his other colleagues.

His young opponent in the first round, Nikita Vitiugov, tried unsuccessly several times to take the initiative from the ex-world champion, inviting Kramnik to take a Knight sacrifice both times:
POSITION AFTER BLACK’S 15th MOVE (15…Nf4!?)
gm  VITIUGOV


I found very instructive Kramnik’s post-game comments (you can see the video at the official website).  He soberly explained why he declined both sacrifices, giving some general lines that lead to positions that were not to his liking.

Kramnik’s immediate post game comments, unlike most other elite players, are an accurate portrayal of his  thoughts during the game, not blurred by the emotion of the game or influenced by the result, as is more often the case with his colleagues. Kramnik’s strong nerves allow him to keep his objectivity for longer periods of time.
POSITION AFTER 20 MOVES:

I especially like Kramnik’s disciplined refusal to ever get too excited by the small advantage that he had, or by his opponent’s approaching time trouble.  At most he would admit that he had a small advantage, but he felt for most of the game that his opponent should have had no real problem holding.  It is almost as if Kramnik has no ego…
IN ANY CASE, I thought that his game was a wonderful display of accuracy and technique….worthy of the great Capablanca at his most dangerous best.