SPRAGGETT ON CHESS
A PHOTO IS WORTH A THOUSAND WORDS…

A very fashionable Yaren Arkan playing in the Girls U13 at the Turkish Youth Championships last week.  Says a lot about the success of womens chess in recent times….and about why it is easier to find sponsorship for female chess tournaments! 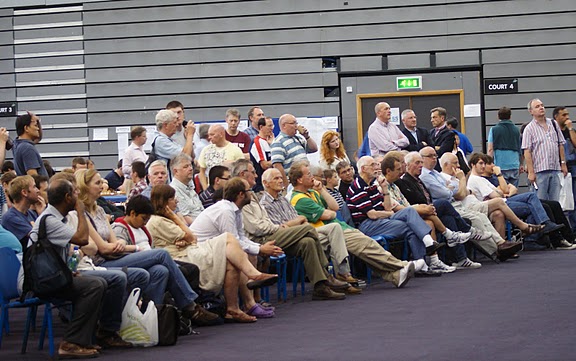 Spectators at the British Chess Championship that is taking place right now.  Who ever said that English chess is for old folk …may be right on! 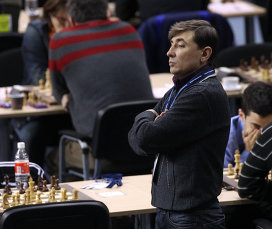 ”You can not fire me ’cause… I quit!”
In some countries (read: a handful of countries) chess is serious business.  The recent emergence of 3rd world countries as power-houses in the chess world has translated remarkably quickly into some very depressing results by mother Russia.  The current female world champion is a teenager from China.  The current absolute world champion is a 40-something from India.  And the small country of Armenia has just won the World Team Championship, way ahead of 4th place Russia.
True, Vlad Kramnik was busy winning in Dortmund and could not participate with the national team, but would it have made much of a difference?  So I suppose one should not be too surprised that GM E.Bareev has felt the pressure for change…and has resigned just days before being fired.  ChessDom reported today some of the reasons and reactions to Bareev’s decision.
”GM Sergei Smagin, Vice-President of the Moscow Chess Federation, said that Bareev’s resignation was to be expected. He added that Bareev is responsible and serious person who understands that the fourth place in the World Championship is simply a disaster.” 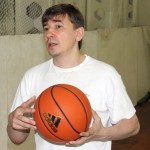 Bareev to  move to the US to coach in NBA?  Maybe…

ChessDom continued:  ”The Russian press devoted a huge attention to the “Ningbo failure”. Alexander Kentler wondered why the management team has given so much time for the outside and journalistic activities on a daily basis. Namely, Bareev published a daily diary in the Sovsport, while Ilya Levitov wrote for Sport Express…

After the Championship, Sovsport interviewed Mark Glukhovsky, chief editor of the respectable “64 – Chess Review” magazine. He immediately stated that – “The main responsibility for such a bad result should be with the head coach Bareev… The team – this is not just the sum of individual ratings. There is some team chemistry: the interaction between the players, their ability to regroup at the right moment, to feel that the fellow in not doing so good, to provide comfort and encouragement. And for all this the head coach is responsible.” 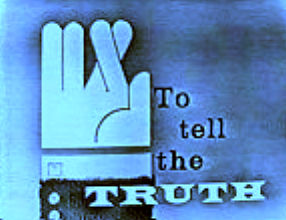 How  fast and loose  has the CFC become in recent years since Hal Bond and Bob Gillanders have become part of the executive?  While this question might be difficult to answer (and even dangerous to speculate on !) , what is known is that since both have joined the CFC executive there has been no  official audit of the CFC’s finances.  Worse still, exactly what happened to close to $100,000 of CYCC profits has neither adequate transparency nor  verifiable accountability.

The situation almost came to a head this past summer when the organizers of the CYCC refused to hand over $18,000 of profits to these individuals until they had absolute guarantees that the money would be used for specific and fully verifiable purposes.
And there is more: an open rift in the CFC executive has appeared.  Mr. Baron (Toronto) wants to see in writing what happened to last year’s profits!  He has dared the Bob Gillanders to present a full report on the profits from the 2010 CYCC profits.  (He might have to wait a very, very long time for this!) 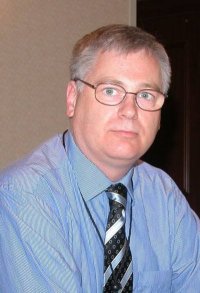 Readers will recall several blog articles here about some   $46,000 of unaccounted-for profits  from the 2007 CYCC –the exact year that both Hal Bond and Bob Gillanders first became members of the CFC executive.  Previous to that, Mr. Bond was involved in a scandal involving $120,000 of Trillium money that went unaccounted for within the OCA, and again Bond was involved in another scandal involving $16,000 from the 2006 CYCC that the CFC said Mr. Bond owed them and tried to not pay.  In 2007, on the advice of Bob Gillander–who was CFC treasurer at the time and who has training as an accountant–the CFC ”forgave” Mr. Bond.

Just this past week on the CFC message board, Mr. Gillander continued his obfuscation of the facts ,writing :
”The records (financial and otherwise) from that time are in very poor shape. I did invest considerable time trying to make sense of it all, and it is both frustrating and embarrassing to admit that some of it remains a mystery to me to this day. Memories are going old …but unfortunately the accounting took a back seat. It is now 2011 and the trail grows cold. … For my own peace of mind, I would really like to know myself exactly what happened.”
LINK 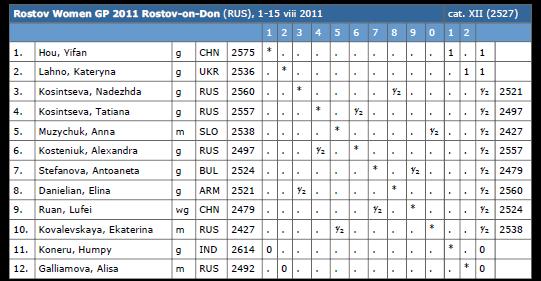 Started yesterday and continues to the 15th of August.  Many of the  world’s currently strongest  female players are taking part, including the current world champion Yifan Hou and her official challenger Humpy Koneru,  as well as ex-world champions Alexandra Kosteniuk and Antoaneta Stefanova.

The opening ceremony was spectacular and counted amongst the guest the current FIDE president Kirsan Ilyumzhinov. 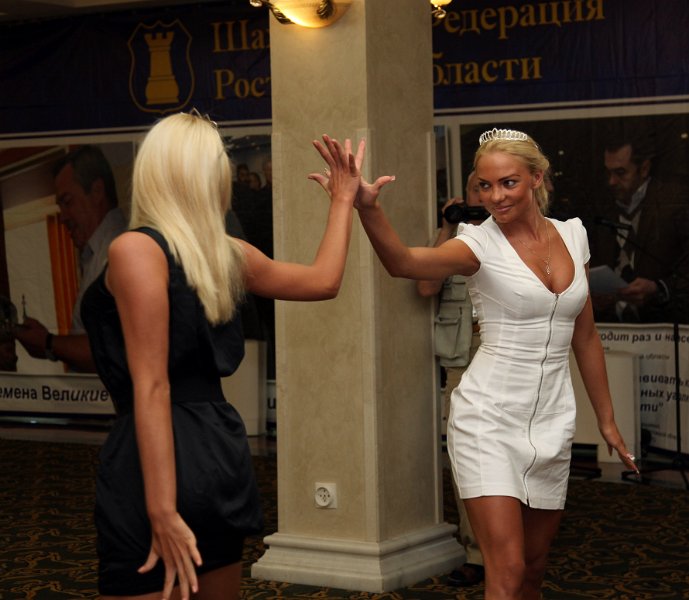 Even  former world champion Alexandra Kosteniuk got up and danced!
RD.1  MATCH OF THE DAY

India’s Koneru had just qualified to play a match for the world championship against title holder Yifan Hou sometime next year (?) and therefore there was much anticipation to see these two face-off in round one!  And they did not disappoint.
POSITION AFTER 35 MOVES:
Yifan Hou  (WORLD CHAMPION)

Humpy Koneru (CHALLENGER)
The game has been a tense affair with the advantage changing sides more than once.  Here White is a pawn up but must be careful.  Correct is 36.g3! , when Black would not have full compensation for the pawn deficit, and White would maintain winning chances.

Koneru , when she stood well, but visibly nervous
INSTEAD, probably short of time, Koneru blundered with 36.h3??, which allows Black to win by force!  DO YOU SEE HOW?