“If I cannot do great things, I can do small things in a great way”

It is not often that one sees an elite grandmaster checkmated in such spectacular fashion as happened to Peter Svidler last week in the Russian Championship against fellow grandmaster Khismatullin:

Position after White’s 25th move (25.Nd5).  Svidler has played the opening in an unusually reckless manner and now his King is in great danger of getting mated along the open a-file.  White’s last move aims to pick up the b-pawn (he is not worried about the Rook on f4 as he is already an exchange up)

A clever move–exploiting the fact that the Rook on h1 is undefended–has the objective of driving off the White Knight from the a1-h8 diagonal.  Peter’s next move is virtually forced…

Svidler can not stop mate! 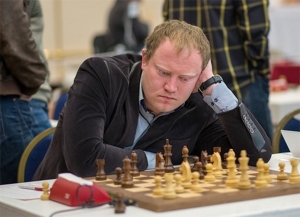 Denis Khismatullin was born in Russia in 1984.