SPRAGGETT ON CHESS
Today’s study is very pretty and contains several  tactical twists that the reader will appreciate.  It is a curious thing about chess that as the position becomes simplified and apparently uninteresting…that  surprising ideas often appear out of nowhere!  It is the search for what lay hidden in any given position that attracts so many keen minds to the game.   Enjoy this one!
H.RINCK 1920

WHITE TO PLAY AND WIN
White is a Rook up but seems to be unable to stop the Black d-pawn from Queening.
1. Re4!

When in doubt give check?!?  No, not quite, but Rinck wants to see where the Black King goes.  Clearly wrong would now be 1…Ka5?? because then 2.Rd4 picks up the stray d-pawn.

The first surprising twist!  The Rook sacrifices itself so that the Black King will find itself awkwardly placed on the d-file.

Now it is Black’s time to think

Again, White must be careful so as to avoid the stalemate as in the previous note!
4… Ke2

This is Black’s best chance.  He has to place his hopes on promoting his d-pawn.  Unfortunately for him, however, the White King has the last word…

Ofcourse!  The Black f-pawn is an obvious target.  If Black now tries 5… Kxf3  then White’s win is certain after the simple enough  6. Rxd2 Ke3 7. Ra2 f3 8. Kg3 etc.  This leaves Black with the pedestrian move in the game continuation….

Picking up the f-pawn and now White’s last remaining pawn will promote.  Black throws in the towel!
[1:0]

Henri Rinck was one of the more prolific study composers. He was born in France in 1870 and died in Spain in 1952. At least 1670 of these have been published! He also published a number of books of studies. Five days before he died (in Badalona, just outside of Barcelona), he published 1414 fins de partie. A copy was buried with him, at his own request. 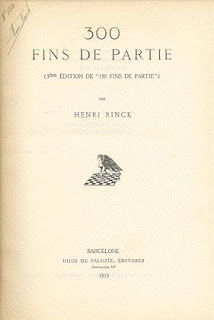