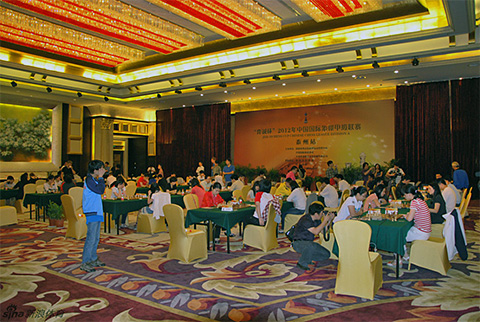 Chinese sports news link
The 2012 CHINESE CHESS LEAGUE DIVISION A is a mammoth 22-round team event stretching over most of the calender year.  The 7th round just finished a few days ago and many of the world’s top grandmasters are taking part.
Below is a small sample of some of the sharp tactics that have been seen so far.  Test yourself!  Good luck!
EXAMPLE 1:
BLACK TO PLAY AND WIN!
Wen, Yang

Nie, Xin
White is being pushed back and now finds himself against wall!  Everything seems to be covered and the material is equal.  What move did Black play that convinced White to throw in the proverbial towel?
Solution given below