The rumours have been confirmed! Former world champion Garry Kasparov is now embarking of a career as a chess coach. First he worked with M.Carlsen in a highly mediatic fashion, until the two got an equally high-profile divorce. Now Kasparov is working with the American star Nakamura.  Does Carlsen feel any jealousy?

The rich, the coach and the student! 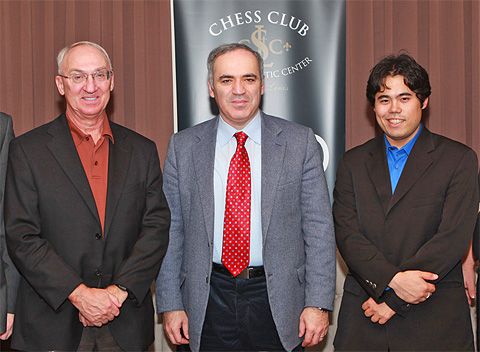 American chess promoter Sinquefield (who is financing the coaching), Kasparov and Nakamura.

The question on every one’s mind is: ”Will Nakamura’s marriage with Kasparov last longer than Carlsen’s?”  Already signs of a rift appear.  Chessbase (link above) mentions that Nakamura has already missed a planned training session with Kasparov inorder to participate in a Las Vegas Poker tournament!  Kasparov was not amused:
“Hikaru’s talent is proven, but he must decide that it is more important to win in chess than in poker.” —Kasparov
SPRAGGETT  ON CHESS
Share