Tretyakov Gallery.  Moscow.  Site of the upcoming World Chess Championship
Current world title holder Vishy Anand is slated to sit down in Moscow next month to face his challenger Boris Gelfand for the World Championship.  At the prestigious Tretyakov Gallery . The match is especially important because it adds to FIDE’s efforts to stabilize the world championship cycle with established rules and procedures that do no change at the drop of a dime.

The coming match is also the first time–if I am not mistaken– that will see both contestants in their 40’s (Anand is 42 and Gelfand is 43). I am not certain that this factor will make any difference with respect to the quality of play–experience might actually raise the over all level–but it does contrast the reality that chess is becoming more of a young person’s game.  Could it be that the qualification rules favour the old dogs?
IN ANY CASE,  here is what Kasparov had to say about the upcoming match (Link): 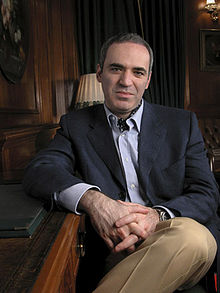 ”The  uniqueness of the forthcoming match, as I see it, is in the fact that for the first time in the modern World Chess Championships history the match between the legitimate world champion and a legitimate candidate won’t be a fight for the title of the strongest chess player of the world.”

_____________________________________
I am not in total agreement with Kasparov’s opinion, as I think that chess history does not lack in examples where the 2 strongest players DON’T  sit down for the World Championship.  Petrosian vs Botvinnik in 1963 comes readily to mind.  However, I agree with the sentiment of Kasparov’s statement in that it flags a possible failure in the world championship qualification process.  Or atleast, an oversight that sees the younger players knock themselves out in the mini-matches.
THAT BEING SAID,  my money is on Boris for becoming the NEXT world champion!

Anyone with this much fashion style deserves to be World Champ!
SPRAGGETT  ON  CHESS
Share