The young Ukrainian Alexander Ipatov earned his final GM norm in the Cappelle tournament, scoring a very respectable 7 points out of 9 points.  Last summer I wrote on this blog of the curious fact that Alexander plays for the Spanish chess federation.  Even so, he remains one of the top young players that the Ukraine has produced in recent years. 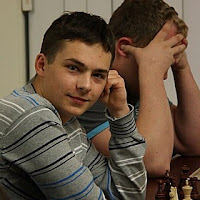 In the position  below Ipatov has built up a strong attacking position against the Black King.  Every one of White’s pieces is pointed in the same direction.  It is for this reason that it is not surprising that White breaks thru the Black defences with a series of brutal moves.  In particular, pay attention to the White Knight:  Zhigalko will not soon forget the destructive force of this beast…
GM  ZHIGALKO

A picturesque position with both White’s Rook and Knight enprise.  Now Black has no choice but to recapture one of them
25…fxg6   26.Nd5-ch!

The devastation to Black’s position is complete.  Now White needs only bring in his Rook for the Black monarch to be snared.  The game lasts just a couple more moves
30…Qxe7 31.Bxg6 Qh4 32.Rg5