Delmore Schwartz,     In Dreams Begin Responsibilities and Other Stories

ch-BLR  Minsk just yesterday.  Position before Black’s 21st move.  A chaotic position, arising from a g3-benoni.  No Knights on the board; instead, Bishops.  But in such positions the Bishops can be so lethal…

Minsk, once more. Position after Black’s 24th move (24…Nxd5)  A sharp position arising from a Be3-Najdorf, seemingly all the rage these days.  If now 25.Rxd5 Rxc6! (certainly not 25…RxR? 26.RxR QxR 27.BxQ RxQ as 28.a5 is a Knightmare)  the game is unclear, with White possibly a tad better.  But unclear in anycase. INSTEAD, in the above position, there is much better!

HOW CAN WHITE GET A BIG EDGE? 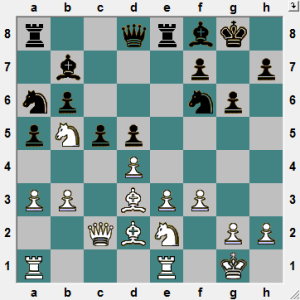 BLACK TO PLAY AND GET A BIG EDGE! 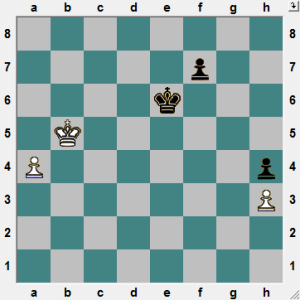 Andranik Margaryan Mem , Yerevan, yesterday.  Position after 55 moves of play.  Ofcourse, White must have the advantage with his outsider passed pawn, but the game will not win itself!  If now 56.a5? Kd7!  and Black will succeed in drawing the game, as the reader can verify for himself.  INSTEAD,  there is much better

ch-BLR Minsk 2014.1.11  Zhigalko, Sergei–Nikitenko, Mihail: 25.Qxc5!! dxc5 26.Rxd5 with clear positional advantage. The White pieces dominate the important squares. White will also pick up a pawn or two in the coming play (the Black e-pawn and h-pawn are difficult to properly defend) and combined with the passed a-pawn give White excellent winning prospects.