Today’s Kasparian puzzle looks like it could have come from a tournament game (for a change!) and makes quite a bit of natural chess-sense. Black has two passed pawns over on the Queen-side and they look dangerous. White has the passed f-pawn and an extra Bishop (for what it is worth). The idea that brings about victory is ingenius. Are you up to it? White to play and win. Good luck!

Bisguier vs J. Penrose, Southsea, 1950
WHITE TO PLAY AND MATE IN 2 MOVES

Bisguier vs Karl Kopetzky, Vienna, 1953
WHITE TO PLAY AND WIN 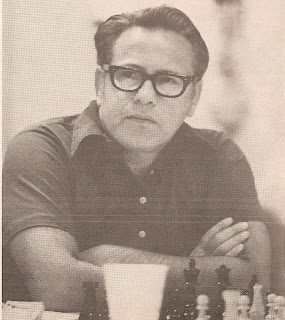 Arthur Bernard Bisguier (born 8 October 1929) is an American chess InternationalGrandmaster, chess promoter, and writer. Bisguier won two U.S. Junior Championships (1948, 1949), three U.S. Open Chess Championship titles (1950, 1956, 1959), and the 1954 United States Chess Championship title. He played for the United States in five chess Olympiads. He also played in two Interzonal tournaments (1955, 1962). On March 18, 2005, the United States Chess Federation (USCF) proclaimed him “Dean of American Chess.” He is believed to have played more people, of all standards, than any other grandmaster in history.

Bisguier was born in New York City. Army service interrupted his U.S. chess career during 1951 to 1953, but he managed to get leave to play in two European events. He played at the Helsinki Olympiad 1952, and then won the third annual Christmas tournament at Vienna 1952 with a 9-2 score. He was made an International MastEr in 1950 from his Southsea victory
After a poor performance in the U.S. Open in 1953, he entered the Philadelphia Candidates’ Tournament for the U.S. Championship and came through with a first place finish and another over-2600 performance. His meteoric rise culminated with a winning score in the 1954 United States Chess Championship at New York He also won the 2nd Pan American Chess Championship.