Tournament Website
Three players tied for first in the World Cup, certainly one of this year’s strongest tournaments!  Karjakin, Wang and Morozevich all scored 6.5 points.  Everybody was closely packed in the final x-table, except for  Gelfand,  Dominguez and Kamsky–all of whom had a luckless tournament.  Especially Kamsky.  When was the last time Kamsky lost 5 games? 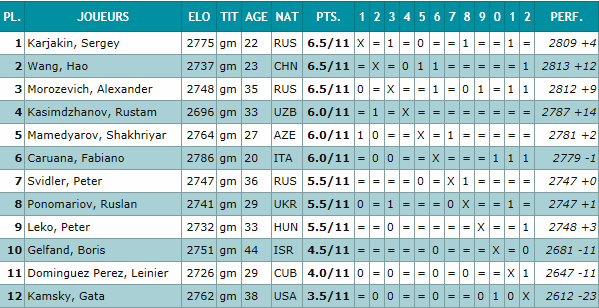 A curious last round matchup!  The ever-solid Peter Svidler stood at 50% right before the game, while Alexander Morozevich was tied for the lead with plus-2.


The following game is a game that is difficult to understand or analyze; even more difficult to play!  Both players deserve great credit for their efforts.  This game shows, once more, that the Sicilian defence is not an easy opening to play , with or against!

gm  Svidler
Up to now both players had been playing quickly.  With Morozevich’s last move, the players deviate from a well-known  1980 Tal-Polugaevsky game.  There Polugaevsky had retreated his Queen to b7; Morozevich’s Qc7 is  new, but not really different in essence.  The Tal game ended in a short –but sweet– tactical draw, raising more questions than answers as far as the relative worth of this opening line is concerned.

The standard way to proceed in such positions –with White–  is to try to gang up on the Black pawn on a6, often doubling Rooks on the a-line.  Ofcourse, Black can defend easily enough, playing his Bishop to b7 and–if necessary–manoeuvring his Knight to b6 or c5, depending on needs.

White usually scores a bit better than Black, but what is new under the sun?
Svidler decides upon a VERY different plan:
15.Nd5!?

A stock Sicilian sacrifice!  Despite the shock value of this sacrifice, it is connected with a purely positional plan!  If the truth be told, it is neither good nor bad.  Black will have to make some important decisions, as will –ofcourse–White.  But if both sides do this, then a sort of impasse will be arrived at where neither player can do much.  I think it was more productive to gang up on the a-pawn…
15… exd5  There is no good reason not to accept!  16. exd5

Someone should really write a book about the Nd5 sacrifice in the Sicilian…maybe someone already has!  It has been played a million times in all sorts of similar positions, and my blog readers can find numerous examples of such sacrifices in previous blog entries .
Here White gets a pawn for the Knight and the Black King will be unable to castle, hindering the coordination of his pieces, especially his Rooks.  Overall, just about enough compensation.
My assessment is that White is risking little, but the position is difficult to play precisely.  Here both players really started to consume time, and in the next 4 moves used up most of their time: by move 19 Svidler would have only 4 minutes remaining (!) while Morozevich would have little more: 9 minutes!
The big question is how to properly organize Black’s defence, especially where he should put his attacked Bishop.  The choices are b7, d7 or b5.  All have plusses and minuses; for example, 16… Bb7 17. Rc3! Qd7 18. Rce3 Ng8 19. c4 h5?! 20. c5! dxc5 21. d6!   Or if 16…Bb5 the Bishop might get hit by a later c4: then 17. Rc3 (17. Rae3 Ng8) 17… Qb7? 18. Rce3 Ng8 19. c4! Bxc4 20. Qd4 and White is winning
Morozevich’s choice seems most principled:
16…Bd7!?

The Bishop keeps close to the King and performs a number of important tasks, including controlling e8 and not letting the White Queen easily play a later Qg4.  And don’t forget that if Black should later decide to play his Rook to e8, it will be defended.
PLAY PROCEEDED LOGICALLY:
17. Rae3   Ng8

White must build up threats and tie Black down to defence
18.Qe2  Qd8!

A classy move!  Black’s development is hurting–and he knows it!–but that does not stop Morozevich from returning his Queen to its original square.  It is necessary first to prevent White from breaking in and over running the Black monarch.  So Black intends to hide his King on f8 before deciding what to do next.
Although White has an impressive looking position, he is running out of direct threats.  And it must be remembered that he had to pay a price : a Knight. The Black position is remarkably solid and there are no pawn weaknesses around the Black King.
White must now get his c-pawn in play, threatening c5 in most lines, and create obstacles for Black.
19. c4!  Kf8!

Retreating immediately to d1 is also possible, but perhaps Svidler’s move is best –in the practical sense– as it gives Black more choices to make and so little time in which to make them.
Morozevich must now decide to risk taking the pawn on c5 (21…Pxc5  22.d6!? is playable now for Black, but one little mistake and Black can lose horribly!)  or to chase away the White Queen from its active position.
HE CHOOSES THE LATTER:
21… g6!?  22. Qd1

The g6-pawn  advance allows Black to later hide his King on g7, but has the downside that it creates weaknesses around the Black King and allows for new tactical possibilities for White.  For instance, he is now threatening 23.Rx7 NxR  24.Bg5, so Black taking on c5 is out of the question.
I have spent a fair amount of time studying this interesting position above, and have come to the conclusion that Black is ok, but must be very precise.   He needs , especially, to reorganize his pieces!  Best play for both sides appears to be 22… Bf6! 23. c6 Kg7!?24. Bd2  h5!  25. Qc2  h4  and now not 26. c7?! Qc8, which favours Black, but instead White should just sit on the position.
INSTEAD, MOROZEVICH  TRIED TO GAIN A TEMPO, HITTING THE ROOK:
22…Bg5?!

It would be nice if Black could trade Bishops, but Svidler’s surprising reply does not allow it!
23. c6!

The Bishop controls the c8 square, making the c-pawn even more dangerous!

Because of the loss of tempo (Bg5-f6, instead of the immediate Bf6) Black can not get the same piece setup as described in the previous note (though he tries to do it!).  Basically, White is going to continue Qc2 (always threatening to advance the c-pawn), as well as Bd2-c3, trying to take advantage of the g6 weakening. Black’s position is beginning to crack….

Svidler has completely mobilized and now misses a possible chance to win the game!

Black is hanging on by a thread, but I would think that White is probably winning somewhere here!  His passed pawn on c7 is so strong…
INSTEAD, SHORT OF TIME, SVIDLER ALLOWS MOROZEVICH TO ESCAPE: