Svidler into the finals. The ‘chuk’s tie-break tomorrow 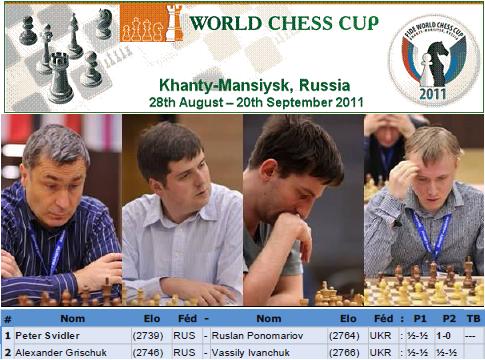 Official Link
Well so much for my predictions!  Ponomariov showed up for the second game of his semi-final match with 6-time Russian Champion Svidler with victory on his mind.  He welcomed Svidler’s Grunfeld Defence with the rarely played 7.Qa4-ch.
7.Qa4-ch!?
GM  Svidler

GM  Ponomariov
A check, yes, BUT not checkmate!
The Russian quickly realized this and the game continued (!)…with several twists and turns that were criticized in the post-game press conference, until Svidler sacrificed an exchange in return for a close to winning position.
POSITION AFTER 19 MOVES:

Black had just turned down White’s draw offer.  Why?  He has a 3-1 Queenside majority and the Bishop pair in an open position!  Essentially, he plays for the win ‘for free’!  A few moves later things became clear:
POSITION AFTER 23 MOVES:

This is when I first logged onto the official tournament site to see what was happening.  My first impression is that I was feeling sorry for Ponomariov!  Despite how Svidler tried to make it seem more difficult than it was in his press conference commentary, the position is hopeless for White.  There is little counterplay and nothing to do to stop the Black Pawns from advancing forward.