Official website
You have to hand it to Grischuk!  He may miss (and often)  the mark in the regulation time control games, but in the tie-break games he is invincible.  We just need to remember his achievements earlier this year to reach the finals of the Candidates Tournament…This time around Ivanchuk fought like a lion , but in the end it was not enough to match the youthful energy of the Russian superstar.

What is more, it was all anticipated before hand!  GM Tkachiev WhyChess wrote yesterday:
”If that semifinal match goes to rapid chess then Grischuk will undoubtedly be the favourite due to his stronger nerves – the guy can play 50 moves with 10 seconds for each and he’s not bothered. If a chess player’s got such an option, plus he also plays as well as Grischuk does and he’s not inferior in the opening (and Grischuk’s not inferior to Ivanchuk in the opening), then he automatically becomes the favourite at the reduced time control. There aren’t many like him in the world just now. Grischuk is, you might say, a master of the format.”
Now Svidler and Grischuk will play 4-standard time control games for all the marbles. Game one begins this Friday.  Both players have already qualified for the next Candidates Tournament by virtue of reaching the finals in Khanty Mansiysk.  And the winner takes 120,000 dollars while the loser takes 80,000 dollars.  Should be a great match (I predict 2.5 to 1.5 for Grischuk) 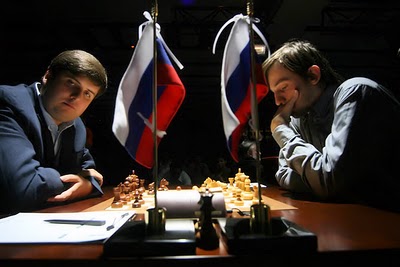 The two 25-minute games were split with a win each.  The 3rd game (at 10 minutes each) was an excrutiatingly poor game that kept going back and forth!  White was winning; the Black; then White, then Black….finally Ivanchuk cracked and threw away the win in a manner that should give reason to anyone who loves the game of chess to oppose any more of these ‘knock-out’ tournaments by FIDE.  Games like this do nothing for the dignity of the game…INFACT, they hurt the game.
POSITION AFTER WHITE’S 33rd MOVE:

Black has an easy win with 33…f4 (threatening, amongst other things, taking on g3).  INSTEAD, obviously very short of time, Ivanchuk made two of the worse moves in a row to lose: 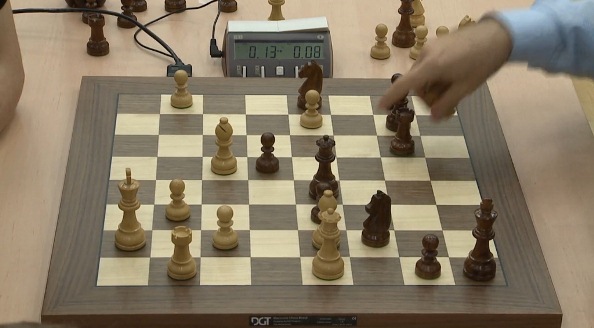 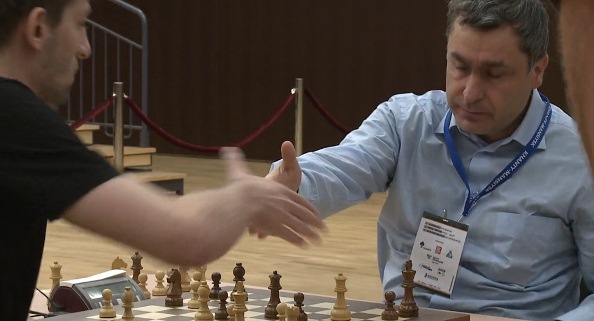 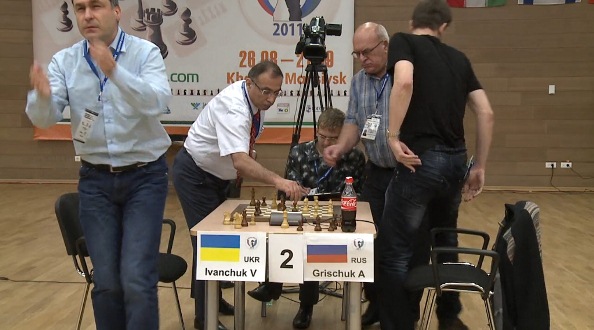 Ivanchuk’s reaction says it all 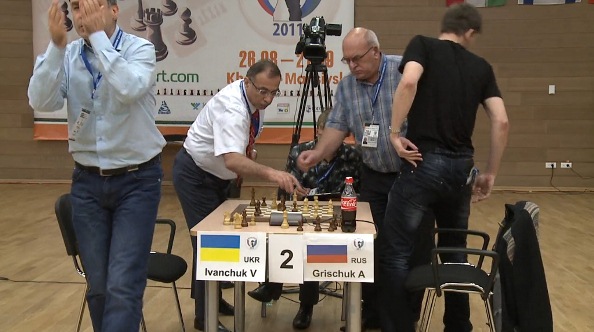 Ivanchuk can not believe what he has done to himself.

Grischuk then only needed to draw the final game to take the tie-break match.  At the press conference he did not make any excuses for the low quality of play in the 3rd game, and gave all the credit to inspiration from Judit Polgar’s games:
”In the third game I played in Polgar style: my combination was absolutely unsound, but all the pieces on the board started to hang, and the opponent resigned in three moves. This is so typical for Judit!»   Link 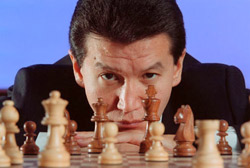 Sixteen years after first becoming President of FIDE, Ilyumzhinov continues to re-shape the world of chess as he wishes.  Now, with the exception of the actual world championship match, all the big qualification events have the identical formula: absolute minimum number of regulation time games followed by a half dozen or so rapid games played one after the other.
This is based on a principle:  if-for example- a pig-farmer in Thailand, who might also happen to be an exceptionally weak chess player, watches these games then he will not only be able to understand the blunders being made, but he will be able to relate them to his personal experiences in his own games!    In Kirsan’s eyes, this is called chess promotion.  Chess for the masses 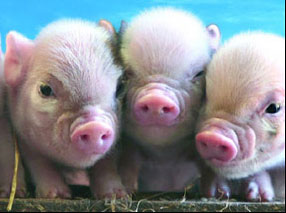 While that may be true in some limited sense, it should be pointed out that when the pig-farmer plays  chess he does so in private.  He doesn’t have to make a fool of himself in front of the whole world!  Furthermore, the flight of sponsors from the game of chess as well the virtual disappearance of chess columns in respected newspapers  do not seem to support Kirsan’s vision of chess in the 21st century.
A professional chess-player  plays chess; a pig-farmer  does pig farming.  I think it is important to keep both worlds separate.  But especially I believe that FIDE should allow the best players in the world to play the best chess that they can, by providing the optimal circumstances to do so.

This is not the case today.  My hat is off to young Magnus Carlsen –to many the best player in the world–for being too smart to participate in such silly chess exhibitions.
SPRAGGETT  ON CHESS
Share