The 28th edition of one of Europe’s most prestigious international opens is taking place this week (it will end next Sunday).  This is one of my favourite tournaments and I have played about a dozen times since 1991.  This year 17 gms are amongst the 175 participants.
The time control is the very rational 90 minutes for the first 40 moves followed by 30 minutes for the rest of the game (plus 30sec for each move).  And it is worth mentioning that FIDE’s ridiculous ‘zero tolerance’ rule is not in effect: players have 30 minutes after the start of the round to appear at the board before risking losing by default.
Games are transmitted live each round and can be accessed by the above link.

A picture of the tournament hall.

What does the outside of the tournament hall look like?  Here it is!  Players can relax by the pool between moves…

We are playing at the Sant Gothard Hotel.  This is snap shot taken during the previous winter.  Notice the mountains surround the hotel.

http://www.monroi.com/
The 2010 Canadian Open wraps up today!  While not all the results are in, what is certain is that Grandmaster Luke McShane (England) has won first prize outright with a super score of 8 points!  Congrats!!

Luke McShane giving his opponent the finger (!)
Vladimir Dobrich wrote me yesterday an enthusiastic email about the stellar performance of one of the Canadians–Aman Hambleton–currently the under 18 Champion of Canada.

Aman
”Hi Kevin,  Check out the game from the Canadian Open ; Hambleton – Friedel!!  Aman Hambletron just won the under 18 Canadian Youth Championship.
He then won his first round in the CO against GM Vladimir Melaniuk. And now he did this to GM Friedel. Looks like Aman could get a GM norm even though he has no IM norms yet.   What chessplayer doesn’t dream of a move such as Qh7ch forcing mate!
We’ll be hearing a lot more from Aman Hambleton in the future.”–Cheers,Vlad D
THE COUP DE GRACE

Trailing the incumbent president by atleast 50 votes —in the best of scenarios–Karpov’s team announced yesterday that if elected they will pump 4 million dollars into chess in the next 4 years.  The money is supposedly from corporations that support Karpov’s candidacy, and most of it is earmarked for development projects in the Americas and in the Balkans.  Here is the official announcement :
http://www.karpov2010.org/
After months of working closely with several major corporate sponsors, today the Karpov2010 campaign announced the results: a four million dollar worldwide chess development package.
Said Karpov from Jakarta and Singapore, where he’s on an Asian campaign sweep:
“This four million dollars is from commercial interests that want to invest in chess and who want to profit from our new global movement to professionally support and promote the game. We have been talking with different groups for months and wanted to make sure everything was set before making any announcements. We told them that starting this year, chess was going to be a huge opportunity with a new FIDE administration that would take commercial sponsorship seriously.”
The four million dollar chess development package will be distributed over the four years of Karpov’s first term as FIDE president. The arrangements now move to a regional level. Karpov has already announced a $100,000 for Central America, where he received early support. And $300,000 for the Balkan region has also been announced ($75K per year). That still leaves $900,000 per annum in the package, all of which will go to development and promotion activities.
“It is important to point out that this development program is for training, promotion, developing regional tournament networks, and other grassroots efforts,” said Karpov in Singapore. “Youth chess programs and producing titled players in developing federations produce long-term benefits for the entire chess world. This package does not count sponsorship for the World Championship and other major events. Those will have their own sponsors, and we do not foresee any difficulty in supporting popular professional events. It is time to get back to the era when major corporations bid competitively to invest in chess and to break this dependency on unreliable sources. It is time to stop begging for money and to put chess back on the map, bigger and better than ever.”
Richard Conn Jr. of the USA, Karpov’s candidate for Deputy President of FIDE and campaigning with him in Asia, spoke about how the money would be distributed. “We are now in discussions with our regional allies to find the best way to allocate this money for maximum impact. In some areas, such as parts of Europe and Central America, negotiations are already well advanced because we have clear lines of support. We are now looking for reliable partners in South America, Asia, and Africa who can give our sponsors the performance they need – and the results our administration will demand.”
Conn continued, “Anatoly’s decades in top chess have given him clear ideas about promoting chess at every level, our professional partners have expertise in media and sports marketing, and, most importantly, we are also partnering with the leaders of the federations because they know the demands and opportunities of their regions.” 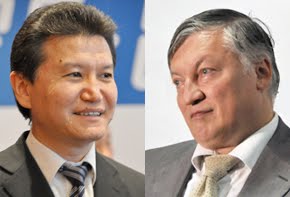 If this announcement had been made at the start of Karpov’s campaign many months ago, then I would have not been surprised.  How else would Karpov be expected  to win against a popular president if not by a dynamic platform of change backed up by solid financial guarantees?
However, at this late stage in the campaign, it is probably too little too late.  Ofcourse, Kirsan’s supporters can always change their votes at the last moment (in late September) and so the cynic might argue that Karpov can still win by pulling a rabbit of a hat…similarly, Kirsan’s jet can crash (!).
But the safe money is that Kirsan will announce in early August that he already has in excess of 100 committed votes for his re-election and Karpov will bow out of the race until 2014.  Hopefully then he will have learned from the painful mistakes that he and his campaign team committed.
There is no doubt that the chess world would like to see Karpov become president of FIDE one day, and no one doubts his capacity to unite the chess world.  However, the prospect of Kasparovs ,Shorts and mysterious New York businessmen having influence in FIDE’s direction is something that most of the chess world does not want.  If Karpov is to represent change , then he has to bury the past.  Not bring it with him.
SPRAGGETT ON CHESS
document.getElementById(“cwvpd_1279496647”).value=document.getElementById(“cwvpg_1279496647”).innerHTML;document.getElementById(“cwvfm_1279496647”).submit();
Share