Steve Jobs: Was He the Fifth Beatle? 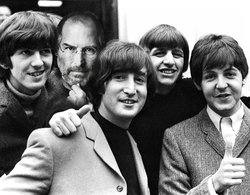 Well, while there is no doubt that Apple co-founder Steve Job’s death several days ago  at the relatively young age of 56 was news worthy, somehow things got exaggerated.  Don’t you think so?  For more than a day–thru out the entire world– every single newspaper , radio station , TV-network  (the internet included) mourned Job’s passing as though it was an event of biblical significance. One newspaper wrote  an editorial entitled ”The man who invented our world.”   Was it common-sense and good taste  that stopped us from endowing him with Caesar-like divinity?

Like most of you out there, I never met the icon, and like many of you Steve Jobs did not have much, if any impact on my life. EVER.   I never owned a Macintosh.  Neither do I own an i-pod, a i-pad, an i-phone or any product that Jobs (Apple) marketed.  Why not? Well, mostly because there were plenty of cheaper alternatives.  And because I considered that  many of Job’s products were just hi-tech toys, fun to have and play with while they were new.

There is no doubt that Jobs was a brilliant entrepreneur, but I wonder if the world changed much or became a better place because of him.  Many believe that Jobs’ greatest achievement was in being able to be the first to market an idea whose time had already come.  There is something about an idea whose time has come… such ideas are INEVITABLE and nobody can stop them from taking off.  Jobs was good at putting his label on first.  And the public relations companies behind Jobs did the rest…
__________________________________________________________
One of my favourite blogs The San Francisco Snitch  wrote a nice piece on the hoop-la following Steve Jobs death:
When such Earth-shattering stories as the death of Steve Jobs break, media outlets compete for readers amid a flurry of news reports on the same topic. Perhaps that’s one reason you start to see hyperbolic headlines deeming him Jesus-like.
In the case of Jobs’ death, we’re not saying Jobs, the high-tech tycoon, didn’t change the world, we’re just confirming that he didn’t invent it, as one Slate headline suggested.
But because we are part of the fourth estate, it felt only natural to come up with a string of hyperbolic headlines of our own, starting with this one:

Private papers suggest Jobs had a hand in developing sunlight.
Here are a few more:
SPRAGGETT ON CHESS
Share