Spanish Tch: a retro-spective (Part I)

Congrats to Sestao for winning–for the second consecutive year–the Honor Division of the Spanish Team Championship, one of Europe’s strongest team championships!  Narrowly edging out Solvay on tie-break, their  youthful line up included Dominguez, Giri, Vachier-Lagrave, Edouard and Salgado, all super-gms or soon-to-become super! Other team members include Romero and Del Rio.

Having played very little serious chess the past year and a half, the Sants tournament at the end of August indicated that I needed more regular tournament practice.  My play in Linares, however, was quite good and of an excellent standard: though I lost 4 games, two of these I could have won in just one move (!)–against Negy and Navara .  When you take into account that I could have also won my excellently played 6th round game at move 29, the conclusion is that I could have easily finished at plus 1, a very respectable result on board 1, where I was the lowest rated player!

My youthful opponent was strategically outplayed right from the opening in good style and was forced to sacrífice a piece for insufficient material a few moves  before arriving at the above position.  Here I can now win, exploiting the weak back rank of my adversary:

If my opponent backs up his Rook along the d-file than I just bring in my King.  And if he plays 30…Rxg3 (relatively best) then 31.RxN threatens mate and allows the White Rook to penetrate and win some pawns.  The computer gives me 3 pts more!  Black could resign with a clear conscience.

INSTEAD,  I played less precisely with 29.a4–which is also strong–but creative play on my adversary’s part allowed him to survive to a Rook and Knight vs Rook ending which was drawn in some 80 moves…

As said, overall I was satisfied with my play.  The lesson I learned is that at my age I must make a bigger effort to maintain my form and play more often.  This I will do in the next year, when I hope to play atleast 70 to 80 games. 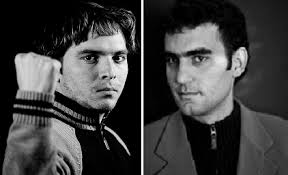 My losses to the Cuban superstars Bruzon and Dominguez came both with the Black pieces and my opening preparation was simply not good enough!  They both played precisely,energetically and deserved to win.

Had Eric converted on a slightly superior position in the final round, then his result would have been excellent, especially given that Eric was dogged by health issues for the entire event.  Several days before the tournament was to begin Eric emailed me saying that he was suffering from a cold.  During the event this proved to be an issue, complicated by his nose bleeding–sometimes during play!   NEVER THE LESS, Erics final result was quite respectable and could have easily been better.  He lost 5 rating points playing board 3 (I lost 8 points playing board 1)

Eric’s style of play impresses me.  He is clearly a serious student of the game and is always working on becoming a better competitor.  Well liked by all, respected for his fighting spirit and obvious talent, I think that Eric has a bright future in chess, despite coming from a (backward) chess country like Canada.  His immed iate objectives in the coming year  should be to gain experience, deepen his opening repetoire and to reach 2650 as soon as possible (this will increase his tournament invitations)

On top  of this, Eric does not have any of the bad habits that held back some other Canadian talents  some 20 to 30 years ago (drugs and alcohol especially)  Not getting any support from the national federation (CFC) is not an issue with Eric as he seems quite willing to sponsor his own chess ambitions. Hopefully the CFC will not put any obstacles in Eric’s path leading up to the next Olympiad (readers might recall that sectarian Ontario chess-politics almost prevented Eric from participating on the last National Team)

Eric is now probably safely back at his appartment that he shares with fellow Canadian Aman Hambleton in Valencia.  Their next tournament is in Norway at the end of the month.  I am certain that all of my Canadian readers wish both Canadian talents the best of luck!