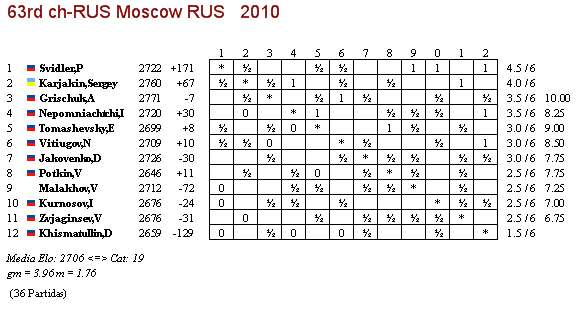 Peter Svidler is having a great tournament!  He leads with 4.5 points from 6 games, closely followed by Karjakin (4 pts) and Grischuk and Nepomniachtchi (3.5 pts each).  The tournament is one of the strongest in recent years.
Below is Svidler’s win over the hard to beat Malakhov (infact, it is his only loss so far!).  The game was very interesting up until the point that Malakhov ‘forgot’ to resign. This was the position after Black’s 40th move:
GM MALAKHOV

GM SVIDLER
If there ever was a crushing position this must certainly rank right up there as one of them!  White has 2 Rooks for the Queen and the Black King is completely bottled up.  Malakhov must have been hoping for a miracle perpetual check should Svidler double on the 7th rank and then take the pinned Bishop.
Svidler put an abrupt end to such day dreaming by finding a really idea:
41.Rf8!!

There is an interesting open tournament taking place right now called the Bansko Grand Chess Open.  I suggest the readers take a look at the link to the tournament site for more details.  Some interesting chess has been played, especially by the Armenian champion, Grigoryan.  Witness the Perunovic vs Grigoryan game below, a powerful blow-out in just 24 moves!

Avetik Grigoryan
According to Chessdom:  ”GM Avetik Grygorian, the reigning Armenian champion, got the better off from his encounter with IM Miodrag Perunovic. After the game he commented: “In the morning I thought that it’s been a long time since I played my favourite King’s Indian defence, and I decided to use it today, especially as I thought it would have been a surprise for my opponent. Later I found that Miodrag guessed which opening I’ll choose, but he misplayed the moves’ order and got worse position, which he couldn’t save from that moment on.”
No kidding!  Just take a look at the crazy position after White’s 23rd move:
GM GRIGORYAN