Shirov out in World Cup! 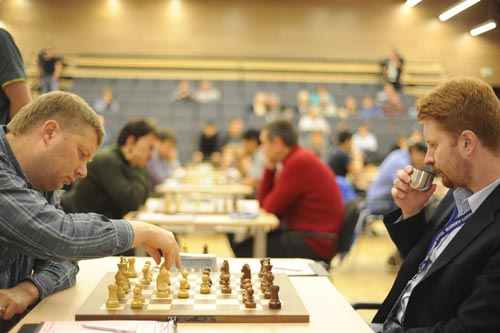 For me the quick elimination of Alexi Shirov in the second round of the World Cup comes as a complete surprise.  No intention to belittle his respected adversary (GM Potkin), but Shirov’s elimination removes one of the most interesting and dangerous favourites at any world championship event.  Makes one want to re-think the present system of play.
IN ANYCASE, it must be admitted that Potkin really wiped the board with Shirov in their first encounter.  Something went terribly wrong soon after the opening, as Potkin gained a ‘free’ attack against his King.  His execution was perfect:
POSITION AFTER 27 MOVES:

Here Potkin finished the game with a showy sacrifice:   28.Rxf7!
Shirov resigned on the spot. Taking the Rook goes off quickly to 29.Qh5-ch

Being one down and only one game left, already Shirov found himself with one foot out the door on his way home.  Again, something went wrong in the opening as he sought to get an advantage by original means.  Soon he was much worse, but surviving.  In the following position the worse is already over, but Black still stands better.  Probably depressed, Shirov lost in just one move!
POSITION AFTER 32 MOVES

Here the fight can continue with 33.Nd4 with a complex fight.  Shirov blundered with 33.e6?? and after 33…Rf5!  he gets mated or loses too much material.  He resigned immediately