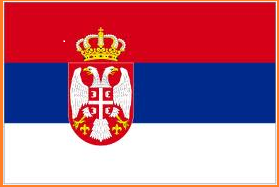 Serbia has a long and proud chess tradition dating back to the 19th century.  Many great players have come from there–too many to mention here– and many great tournaments have been organized there.  I have had the opportunity to play in Serbia several times in recent years and I can attest to the passion and enthusiasm of the players, the organizers and the general chess public!  Serbia is one of my favourite countries in all of Europe and I have made many friends there.

Games, photos and Information
Chess results
The 2012 Serbian Championship (absolute) is taking place right now in Vrnjacka Banja between April 23 and May 5.  The format is a 14-player round robbin with virtually all of Serbia’s strongest active players taking part.  As you can see from the cross table above, 12 gms and 2 ims, make this one of the strongest national championships in all of Europe!

You can follow the tournament as it progresses from the links above. Live games, photos and much more.  The chess is , as usual, uncompromising and short grandmaster-draws almost non-existant.  I am definitely enjoying being a spectator!

gm ABRAMOVICH
It has been a tough fight up to now. White is a pawn up but Black has excellent compensation with his active pieces in the centre.  It might be tempting to try to exploit the position of the White King with 41… Nxf3 42. Kxf3  Rd3 but after  43. exd3 Re3 44. Kg4 there is nothing for Black to show for his material deficit!
No, Black must play more rationally (he is a pawn down!) with 41… Qxc1! 42. Rxc1 Rd2! with …g5 in the air, and the game should objectively end in a draw.
HOWEVER, Black wanted more and he tried to force the game with the provocative:
41…g5?!

Politely asking the Knight to move (which it can’t, ofcourse, without losing his e-pawn!).  White must now find a series of ‘‘only’‘ moves…
42.Qb1!

An amazing attempt to confuse White!  Black simply threatens to mate White , leaving White with only ONE way to avoid this!  BUT will Abramovic find it?

The only practical resource! Black tries to postpone the mate, but he can not escape his fate for long…
44. Rh8!!