I like the spirit of this  brief spin on the ICGA’s decision to bannish award winning Rybka from the world of PC-chess championships.  Done by a tech-geek.  Non-chess playing tech-geek.  ”Performance enhancing code” and ”digital doping” have been invented and will forever remain part of our lingo… 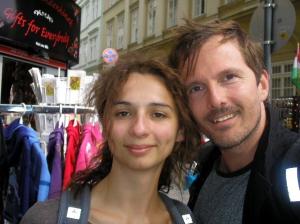 Rybka programmer V.Rajlich and his wife Iweta, who is a  Polish WGM
Take a look at the article (link above).  As expected, Rajlich has largely ignored ICGA’s decision and issed a brief statement denying any wrong doing:
”Rybkahas does not “include game-playing code written by others”, aside from standard exceptions which wouldn’t count as ‘game-playing’.  The vague phrase “derived from game-playing code written by others” also does not in my view apply to Rybka.”

Move over, Lance Armstrong!
As a brief aside, readers who felt strongly enough on the topic of Rybka’s banishment to write to me concerning last week’s blog  report, were evenly split on where the blame should go. My take on this is that while there is no argument that copyrights and patents must be respected, ICGA’s latest drama is more about the kettle calling the fyingpan black….
Share