First round of the FIDE Matches took place on Thursday.  All four games ended in draws, each in a different way.  With the exception of the Aronian vs Grischuk game, all the games were drawn in just a few hours. The second round takes place Friday.
I forgot to mention in my last blog-report on this chess event that the time control is reasonably slow: 2-hours for the first 40 moves, followed by 1-hour for the next 20 moves and then 15 minutes til the end of the game (with , ofcourse, the 30-second increment for each move starting at move 1). 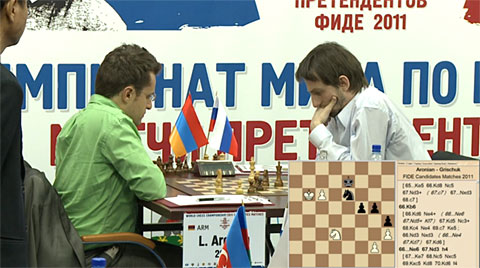 There are no adjournments.  This factor might have played an important role in the Aronian vs Grischuk game, where Aronian–with a strong passed pawn–  let several wins slip thru his fingers in the final minutes of the marathon 6-hour plus game.  Perhaps, also, Aronian is not used to such long games.
POSITION AFTER WHITE’S 20th MOVE (20.Qc1):
GRISCHUK

ARONIAN
The opening of this game was a Grunfeld Defence (X-change variation) where Aronian surprised the spectators accepting a positional pawn-sacrifice that Black usually offers in this opening that White generally refuses!  In the position above Black has absolutely no problems at all and I am certain that most Grunfeld players would be quite pleased with Black’s compensation for the slight material deficit.  Especially, White’s a, c and e-pawns are all isolated and easy enough to attack.
Black should now consider 20…Be6 (or 20…Bb7) followed by placing his Rooks in the centre.  Black could even refuse a draw offer from White in this kind of position!  Instead, Grischuk played the simplifying 20…Bg4?! and even allowed the exchange of Queens a few moves later!  Soon Aronian found himself in an ending a pawn up and with some remote chances…
POSITION AFTER WHITE’S 24th MOVE (24.Rb1):

Now Grischuk has some work before he can make a draw.  Being a pawn down, he still has to prove that he has enough compensation.  Even so, after 24…Rb8 25.Rb3 Nd3!, it is difficult to believe that any grandmaster would lose this position with Black!
But match psychology is a tricky business:  Grischuk lost an ending like a child against Aronian earlier this year at the Wijk Ann Zee tournament and no doubt had still not got over it.  In the ensuing play Grischuk failed to get any concrete counterplay and Aronian slowly but methodically built up a winning position!
Analysts say that Aronian’s 69th move (69.Nc5) was a blunder that thru away his win.
ChessInTranslation wrote:  ” What can you say… Chess is a cruel sport. It’s not enough to have an absolutely won position. You also have to win it! Aronian conducted the game brilliantly, was very close to succeeding, but couldn’t maintain his concentration to the end. He began to rush, to make inaccuracies, to slowly let his ingenious opponent slip. Grischuk showed himself to be a real escape artist. Every inch a Harry Houdini! And it’s unlikely the best program in the world could have defended better in the Russian’s place. In any case, our man demonstrated real nerves of steel…”

Grischuk (left), Aronian and Gelfand at the opening ceremony the day before.  No doubt Grischuk was still thinking about his loss in Wijk Ann Zee!
I am one of the few who actually believes in Grischuk’s chances in this match (and in winning the overall event!).  It is a bit of a bad luck that he is paired against Aronian–who many feel is the best player in the world at present.  But what to do? Grischuk or Houdini (or both!) ??
Recently Grischuk’s results have been below parr and no doubt he is going thru some sort of personal crisis.  However, these crises often are necessary for a grandmaster to jump to the next level.  It is enough for us to remember how Boris Spassky emerged from a series of personal crises in the mid-1960’s and soon went on to become the strongest player in the world–playing not less than 3 matches for the world championship!
Be that is it may, I also confess that my own record is not very good in picking underdogs in high-level chess matches!
However, today’s game between Grischuk and Aronian could mark a turning point in the personal chess-rivalry between these 2 great players.  There can be no doubt that Grischuk must be very confident after having saved a lost ending against a player who is considered such an extraordinary endgame player.  We will just have to wait and see!

KAMSKY
I don’t think this move was prepared at home but was instead some sort of ‘Lasker’ over the board invention that was psychologically designed to take his opponent way out of his opening preparation and into  obscure positions.  Ofcourse, Black can take the pawn but White would have enough practical compensation for one game ( for example: 7…Nxa5. 8.Nd5!?  Nc6 9.Nxf6-ch gf6 10.Nxc6 bc6 11.Bc4!?)
But Topalov simply ignored the offer and developed his pieces, achieving a normal enough position without any problems.  At move 23  he ‘killed’ any hopes that Kamsky might have had when he sacrificed an exchange for a pawn (position below):

23…Rxd2! 24.RxR Bxb4
It soon became clear that the game was going to be a draw.  That was agreed at move 41.
There is not much to say about the other two games.  Radjabov vs Kramnik was a very boring game that lasted all of 25 moves.  Kramnik employed the ‘Lasker’s defence’ against the QueensGambit and  must have surprised his opponent who showed that he had nothing special prepared for it!
KRAMNIK

RADJABOV
The move 7…Ne4!? leads to simplification and therefore often results in colourless draws.  Lasker , however, only played it during a short period of his career, and therefore it is surprising that his name would be attached to it!
And finally, Mamedyarov vs Gelfand  started off as a real game but ended in a fizzle.  Gelfand played the Najdorf instead of his usual Petroff defence ( psychology!) but ended up in a clearly inferior position in the early middlegame.  Soon Gelfand chucked a pawn and an ending arose where White had some practical chances of winning the game.
POSITION AFTER 31 MOVES:
GELFAND

MAMEDYAROV
It is not easy for White to make progress, as he has many weak pawns.  However, it is clear that White runs no risk and can play this position for a hundred moves trying to convert his pawn.  One plan is to play his Knight into c4 (freeing his Rook from the defence of his b-pawn) and then activate his Rook along the a-line.
However, Mamedyarov has a reputation for not liking to play endings (see my blog-report on the Frankfurt tournament from last year!) and he did not even try to press Gelfand !  The game ended in a draw less than 10 moves later… 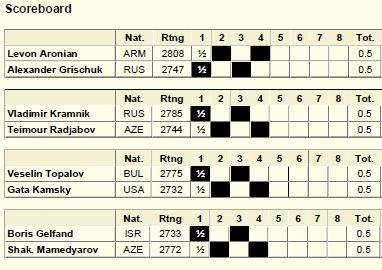