Bobby Fischer: the legend who simply refuses to go away.  I chanced upon the photo below at Winter’s  site (chesshistory) which is great for all sorts of historical tidbits. 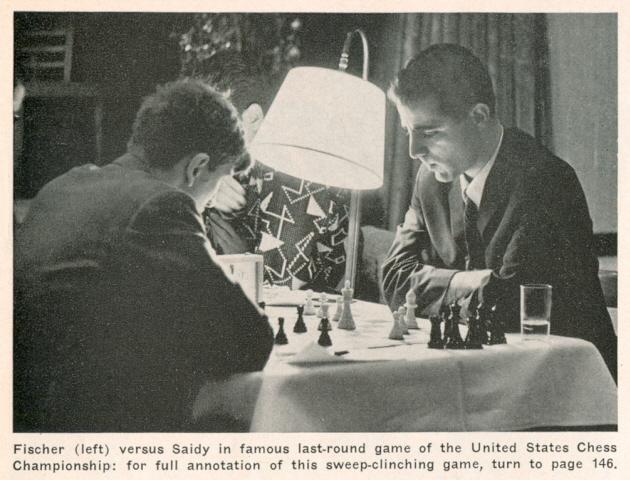 The photo is from the last round game of the 1963-64 US Championship between Bobby Fischer and Anthony Saidy, after Fischer’s 26th move (26…h5):

SAIDY
Black has a slight advantage; in combination with the isolated Q-pawns, the Knight is superior to the Bishop

Fischer had already won the tournament before this game started (he had an incredible 10-0 score by that point!)  and  should he win this  game  then Fischer would achieve something that no other American player had ever done before (or since !)  winning the US Championship with a perfect score!  Saidy, for his part, was in running for second place and had no intention of becoming another Fischer victim…

The tournament was held in the ballroom of  the Henry Hudson Hotel (in the exact same room as where the historic 1945 USSR vs USA Radio match was held!) 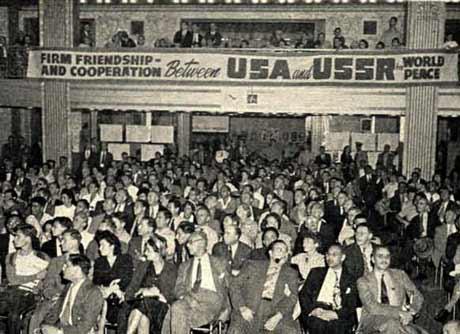 The USSR thumped the Americans 15.5–4-5, signalling the start of a new era in world chess

The late Larry Evans wrote about the 1963-64  US Championship: ”There was no TV coverage and spectators sitting on folding wooden chairs followed the action on six large wallboards hung above the players onstage.

Attendance was sparse in the early rounds. Some celebrities who watched included my old friends Marcel Duchamp and Stanley Kubrick who invited me to a preview of his new film Dr. Strangelove. Other visitors were Edward Lasker, a chessmaster who invented the breast pump, and Harold Phillips, then 90, a lawyer for the Rosenbergs who were executed as spies in 1953.”

The game was adjourned at the 44th move, with Saidy having to seal his 44th move :
FISCHER

SAIDY
White thought a long time before sealing the imprecise 44.Be1
When word got out that history could be in the making, a thousand spectators crowded the ballroom as the adjournment was played out.  A number of tournament participants did not want to see Fischer win the tournament with a perfect score, and so they helped Saidy analyze the above position (!)  But it did little good…and Fischer won the game, the championship and the $2,000 first prize.

It is hard to believe that Reshevsky could lose this position, but trying too hard to win (in his usual time-trouble, no doubt) Reshevsky soon blundered a piece!

Two great American rivals: Reshevsky (back to us) and Fischer 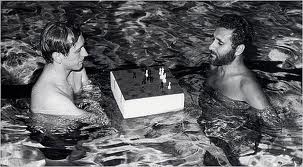 Fischer and Evans posing for a photo

The late Larry Evans wrote (link above):
”Bobby’s 11-0 sweep of the 1963/4 U.S. Championship made a greater impact around the world than in America where the general public was indifferent to chess. Baseball, football and basketball dominated the sports pages. Chess, when it received any notice at all, was lodged in the back between obituaries and comics.
At the time Bobby said bitterly, “Around the world I’m more famous than Joe Namath. In America I’m nobody.”

”Victory seemed so effortless Hans Kmoch quipped that Fischer won the exhibition but Evans won the tournament. His competitors felt a trifle humiliated but I, for one, heeded Goethe’s admonition that our only defense against a genius is to admire him.

“Our guy deserves a shot at the title. He has no superior in the world today,” exclaimed a jubilant fan who reflected the prevailing sentiment. But Danish grandmaster Bent Larsen was singularly unimpressed. “He was playing against children in the U.S.A. All I know is that when they sit down to play Fischer they play as though beaten before the game starts. The Russians say that Fischer is too limited and lacking in self-criticism and that he is really not a serious problem as far as the world championship is concerned. Keres told me he would beat Fischer 8-2 in a match.”
They say revenge is a dish best tasted cold. The irony is that on his road to the world championship in 1971 Bobby also wiped out Bent 6-0.”–Larry Evans

Most chessplayers  remember the Henry Hudson Hotel for being the home of the Manhattan Chess Club in the ’60s,’70’s and to the early ’80’s (the club  moved in 1982) or for being the site of many of Bill Goichberg’s early tournaments.  Not so well known, however, is that Bobby Fischer spent a lot of time there–living there– especially in the months before the 1972 Iceland match.
However, the building has an interesting history.  After doing some research, these are some of the more curious facts and tidbits: 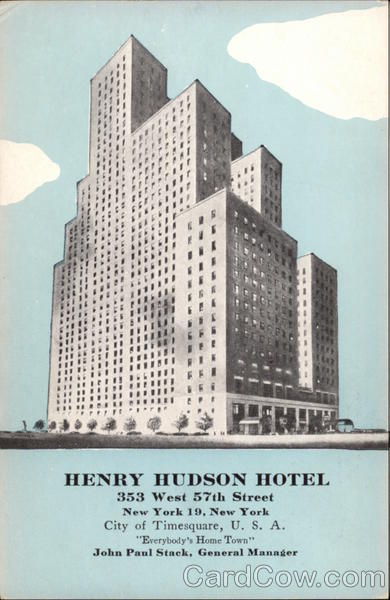 This magnificent 27-story building was not originally intended as a hotel.  Financed principally by Anne Morgan, daughter of J.P Morgan (of the Morgan financial dynasty) and a advocate of women’s rights, the building was to house the American Women’s Association clubhouse and residence.  Construction began in 1928 and finished in 1929. 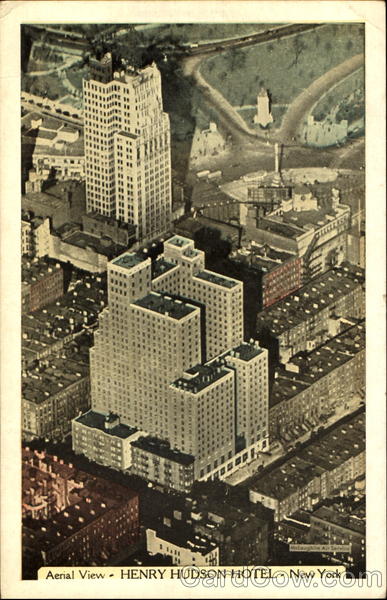 The $7,000,000 club had 1,250 rooms, swimming pool, gym, meeting rooms, terraces on the top, restaurants, etc.  Anne Morgan created the club with her wealthy friends as a place where professional women could network their way to upward mobility in businesses. In those days, even white women were largely excluded from the men’s clubs and corporate offices.

Anne Morgan ( 1873 -1952) was the daughter of J.P Morgan and sister of J.P Morgan.  She did a lot to promote women’s issues and rights. As well, she played an important role in relief work in France at the end of both world wars.  Anne Morgan became the 1st American woman to be awarded the French Legion of Honour.  She never married.

The Great Depression did not treat the club very kindly, and in 1941 was declared bankrupt, and from that point on it became a hotel (Henry Hudson Hotel)  During the II World War it housed soldiers who were being trained before shipped overseas.  After the war, it briefly housed the UN Security Council.

”The hotel played a tangential role in the famous Rosenberg spy case. Harry Gold, the spy courier whose arrest and confession led eventually to the prosecution of the Rosenbergs, and his Soviet handler had violated spy protocol. Rather than sticking to furtive rendezvous at subway platforms or movie theaters, they met for drinks several time at the  Ferris Wheel Bar in the hotel basement.
They were supposed to remain anonymous to each other but after a few drinks at the bar, the homesick Soviet spoke about his wish to return home to his wife and children, divulging enough personal information to Gold for the FBI later to identify him by name as a clerk at the Consulate General of the USSR in New York.”

http://nyapril1946.blogspot.com/2011/03/china-relief-luncheon-at-henry-hudson.html
Harry Gold was sentenced to 30 years in prison for his role, and the Rosenbergs became the first civilians to be executed for espionage. The case is still widely disputed today, often seen as an example of the government’s anti-communist paranoia in the 1950’s. 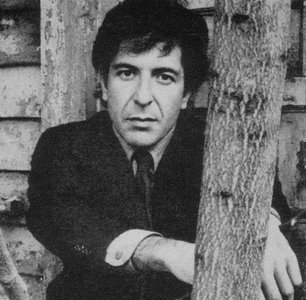 Leonard Cohen was a frequent guest at the Henry Hudson Hotel, as were many other famous musicians and artists of the day.  He wrote or finished several of his songs there, including ” Stranger Song” 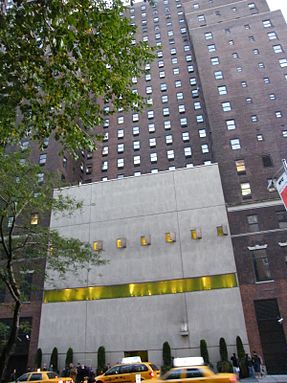 In 1997, the building was purchased by Morgans Hotel Group and underwent a three-year renovation that cost $125 million.  It is  now called the Hudson Hotel .  http://www.hudsonhotel.com/en-us/#/home/
Share