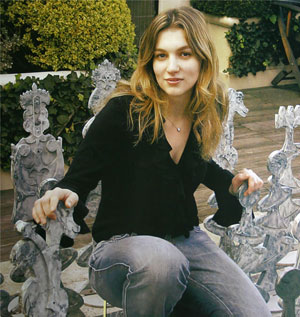 The lovely and talented Almira Skripchenko was born in Moldavia in 1976 in the midst of a chess-playing family.  Her late father was a chess coach (same as Almira’s mom)  and international arbiter (IA) of some reknown.  Almira learned the moves at age 6 and never looked back!  She won many international events and soon became an IM and a WGM.  Her personal best result was winning the 2001 Womens European Chess Championship.
On a personal side, she now resides in Paris, France and is married to French chess-star GM Fressinet (her first marriage was to GM Lautier) and has represented France in international events since 2002.  She has a 4-year old daughter.

In 2003 Skripchenko learned POKER and soon became an enthusiast and started to work and study the theory of the game.  Then she began to win tournaments (and money!) and has even appeared on TV in some well known poker programs.  According to wiki she has earned more than 250,000 dollars so far in tournament play, but the rumour has it much higher!
As a curiosity, I attended one of Stewart Reuben’s poker classes given on one of the evenings during the Gibraltar International back in 2005.  (I knew nothing about the game at the time).  Almira was one of those who also attended and was keen on picking up some tips from Stewart (a well known Poker author and former-professional).  I remember Almira asking some basic questions to Stewart, which somehow registered in my memory as a flag indicating that she had not yet achieved a very high level of play…
HOWEVER, Stewart quickly perceived that I understood even less about the game (he was right!), and he did not hesitate to appoint me as the butler for the evening, fetching drinks for his eager students!  I assume he realized that I was the weakest poker player in attendance…POKER players have that intuitive sense!

HERE  is an interview with Almira taken during the Bundasliga not so long ago…in the video she talks about chess and poker, her family and her plans.  ENJOY (credit to chessbase for the blog idea!)
[youtube http://www.youtube.com/watch?v=GDhMqvhhY0s]
Share