http://www.calgarychess.com/index.html
Alberta has organized 2 of the best-ever Canadian Opens in recent years (2005 and 2009) , having attracted famous players like Alexi Shirov, V.Ivanchuk and V.Bologan, amongst others.  There is no doubt in anyone’s mind that Alberta has  the richest and the  most dynamic chess community in all of Canada.

Furthermore,  the Calgary Chess Club is the most active club in all of Canada.  Numerous excellent international events have been hosted in recent years in Calgary.  Perhaps Canada’s  only norm tournament takes place there: the Calgary International Classic  (Link, link and link). The 5th edition is slated to take place early in May.   I congratulate them on their significant contribution to Canadian Chess!

It is therefore surprising to many that, despite having such a proven track record for organizational excellence,  these same Calgary organizers have  deliberately  lowered their standards  and  put together a really miserable 2012 Canadian Junior Championship, not at all a national tournament in anything other than name.  Could it be that the Calgary organizers are only trying to meet the CFC’s declining standards?

Official tournament website
You can not even read the ”2012 Canadian Junior Chess Championship” header, it being hidden behind a mass of pop-ups! 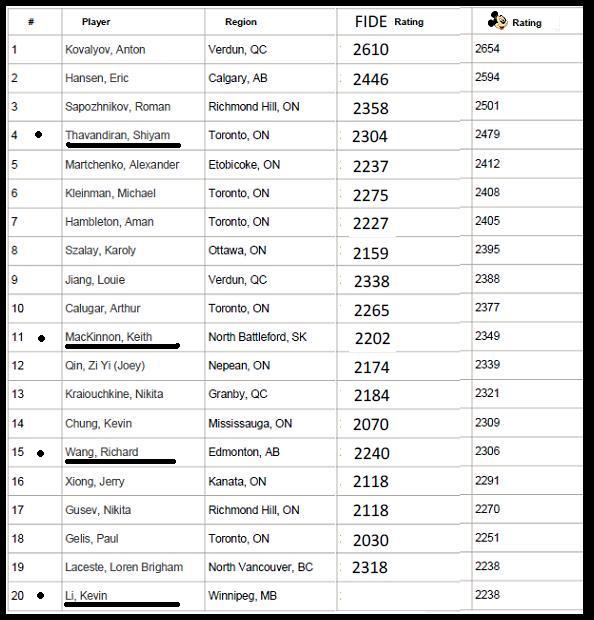 Those taking part in the 2012 Championship have their names underlined

CFC
Readers of this blog will no doubt have realized that I do not spare the CFC leadership for their failures.  I have criticized them for the hundreds of thousands of dollars that has gone missing or has defied accountability.  (And past-CFC prez Bob Gillanders even refuses to account for it! ).  I have criticized the open corruption of their policies and practices. For the lack of oversight. For their lack of ethics and total lack of professionalism at ever stage of their involvement.
My criticism is always directed towards people, not towards Canadian chess.  Canadian chess is NOT the CFC. Canadian chess is you and me and the guy round the corner.  It is our common history and our love and passion for the game of chess.  Canadian chess is our champions–past, present and those youngsters just developing. It is our National Team and those who qualify to represent Canada outside of Canada.
BUT, I repeat, Canadian chess is NOT the CFC!
The CFC has become something of a running joke.  We all know what is wrong, but few give a damn enough to do anything about it.  We all know about Hal Bond and Bob Gillanders and the unaccountability of hundreds of thousands of dollars, some of it going back as far as the Trillium scandal.  The 2007 Canadian Open/CYCC organizer Gordon Ritchie wrote a check to these gentlemen for more than 50,000 dollars to ” promote junior chess” and today Gordon freely admits that this money has disappeared into a black hole.

Like Gordon Ritchie, we all know that the CFC is rotten to the core, but most of us don’t really care enough to do anything about it…so should we be surprised that our top junior players have been steadily moving away from the CFC and its tournaments?
Our youngsters are– like myself and a number of my Canadian gm-colleagues who increasingly rarely take part in CFC organized events– voting with their feet.  Judging by the declining CFC membership, so are hundreds of others.