The 39th Olympiad came to an end yesterday.  Most teams should already be on the road back home, tomorrow at the latest.  From all reports, everyone was impressed with the organizers’ achievement, and most of those with experience in the matter consider it one of the best Olympiads to have taken place.
In the men’s event, the Ukraine could not be caught and won the gold.  Russia I won the silver, and Israel the bronze.  In the women’s event, Russia won the gold, China the silver and Georgia the bronze.  Congratulations!
A total of 148 teams competed in the men’s section, and 114 teams in the women’s section.  This can again be broken down into 247 GMs, 63 WGMs, 160 IMs, 87 WIMs, 81 FMs, and 80 WFMs!  A very impressive event!

The powerful (and youthful) team from the Ukraine. 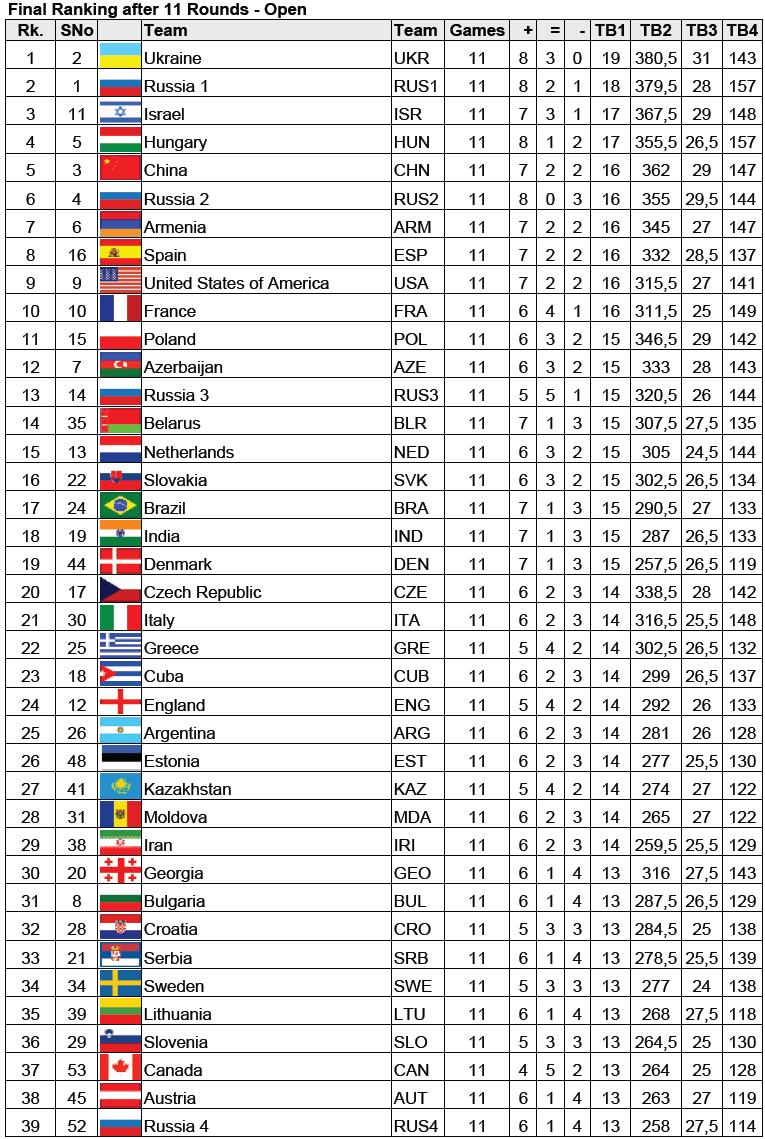 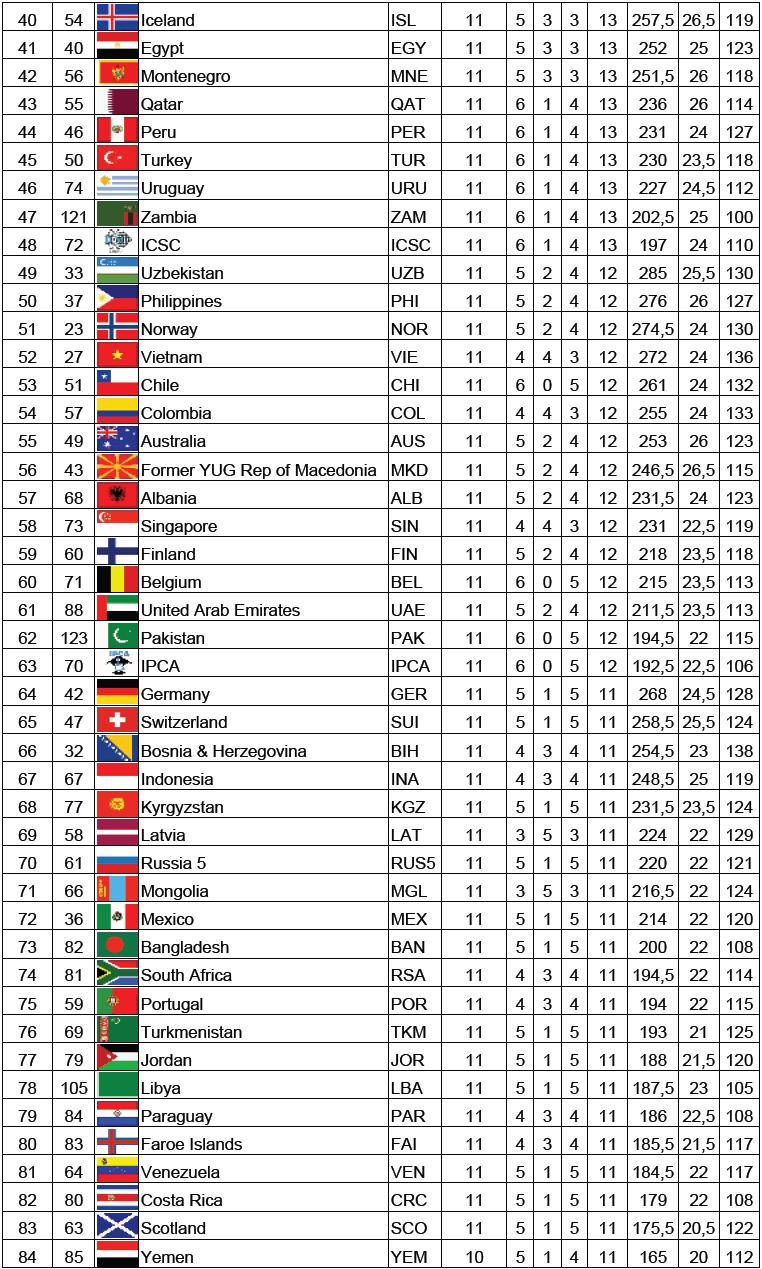 The Canadian Men’s performance will be best remembered for Marks great win over  the Bulgarian superstar Topalov.  Next, Thomas achieving his final GM norm.  Apart from that…just one more Olympiad that Canada participated in.

Mark’s performance on board 1 was excellent, 6 points from 11 games is worth its weight in gold.  It is not easy to play board 1, no matter what country you are paired against, because most countries have atleast 1 really strong player and board 1 has to handle him!  While Mark lost 3 games, the quality of his chess was quite high and I enjoyed playing over his games.

Thomas’s 7 points out of 10 games is also excellent, especially for board 2.  His norm was deserved, and I was impressed with the solidity of his play and the consistency of his performance.  Thomas did not lose a single game!

Boards one and two at this Olympiad remind me of myself and  GM Lesiege, especially when he participated at the 1998 and 2000 Olympiads, in Elista and Istanbul respectively.  We could both play against ANY team and still be competitive on the top boards.

Elista 1998. In Kirsan’s office: Lesiege,myself, Day, Nickoloff and Hergott
The ‘old’ problem of Canada’s participation at the Olympiad has returned in recent times, however.  Canada does not have lower boards that can do the same thing as its top boards do, unless all of Canada’s best players are taking part. Which was certainly not the case in Khanty Mansiysk, which saw the CFC limit their participation to Toronto area IMs.
Today’s Olympiads are tougher in the past, not just since the breakup of the USSR (that was already felt in 1992!), but in the past 2 decades many of the developing nations have become much stronger and even have 1 or 2 gms on their teams!
Canada’s bottom boards (3-players; Leonid, Artiom and Nikolay) scored a total of 12 points between them, which is less than the 13 points that the top 2 boards scored!  Equally noteworthy, between them, Leonid and Artiom scored only a half point in 6 games with the Black pieces.   To do well in these tough team events it is necessary to score more points at the bottom than at the top.
Overall, the Canadian team finished in 37th position (the second lowest since the year 2000), with a total of 13 match points.  The pre-event ranking placed Canada amongst the top 50-60 teams.  The tie-break system seemed to favour the Canadian team after its draw match with Montenegro in the final round, for as you can see from the chart above that Canada’s 4 wins was the lowest number of wins amongst the first 51 teams!  What saved Canada, I think, was that Canada only lost 2 matches. 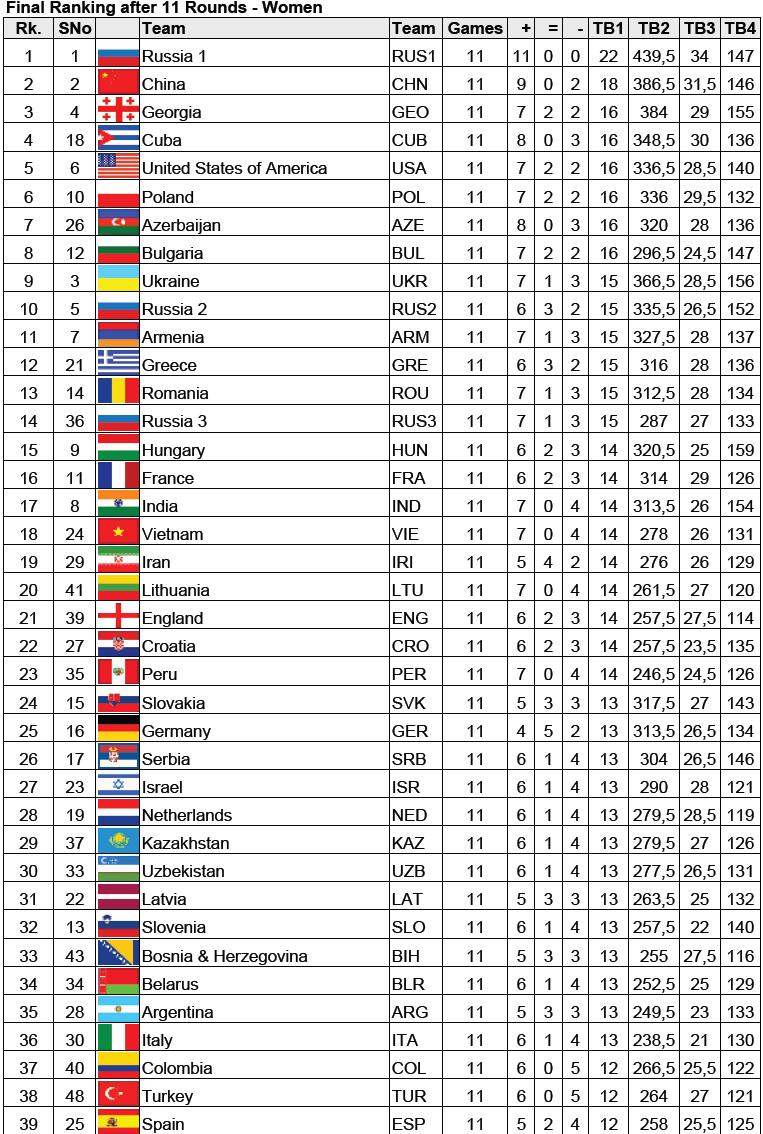 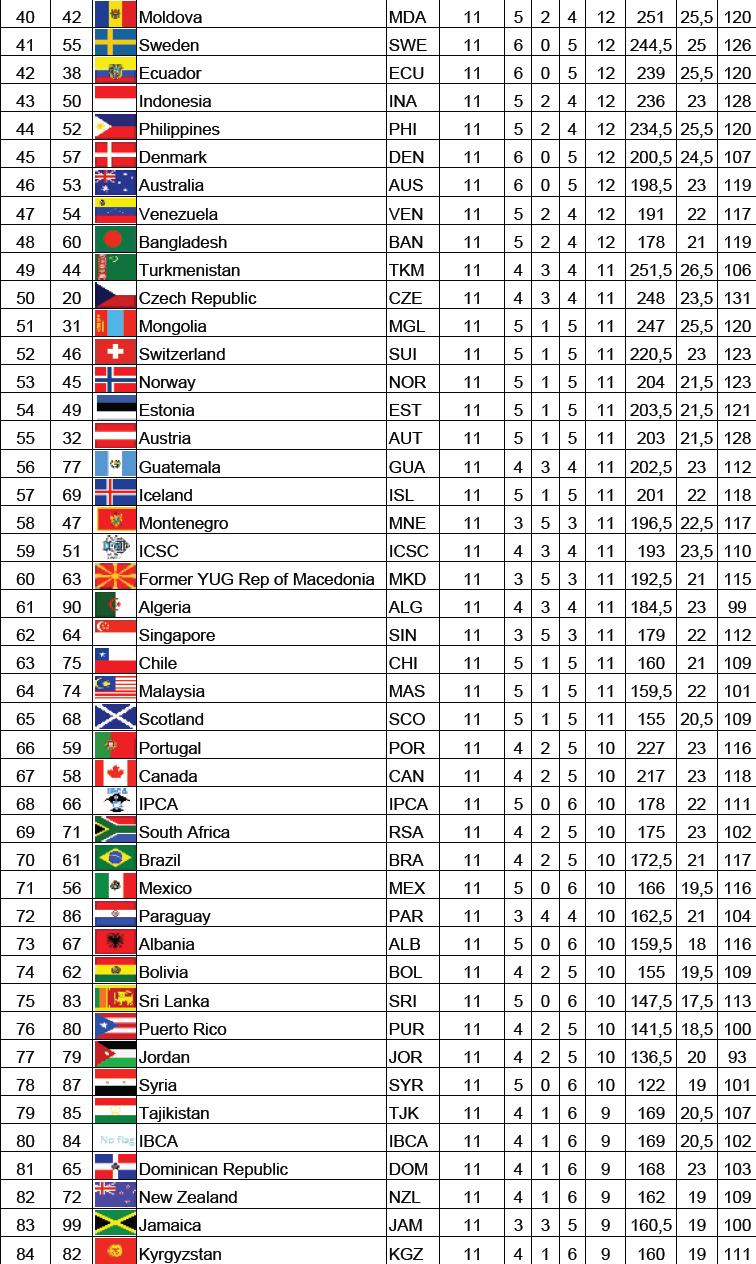 The Canadian women’s team finished at the top of the second half of the table.  I have to admit that I don’t follow women’s chess in Canada (or anywhere for that matter ,except at the world championship level events) so I am not certain if Canada’s performance here is a success for them or not.  Canada’s first board certainly stands out as being a talent. Yuan Yuanling scored 7.5 points in 11 games.  Also worthy of mentioning is Dina Kagramanov’s 5.5 points in 9 games.

Lowering the FIDE flag, marking the official end of the event.