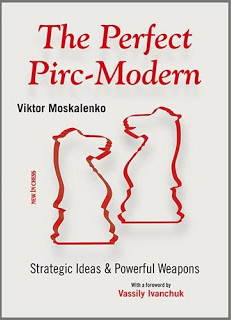 Brought up in  Canada, I had always associated the Pirc/Modern Defence with the provocative hyper-modernist style of Vancouver’s  grandmaster Duncan Suttles. Many of my generation were attracted by the dynamic winning chances such a setup offered. But the opening never met with the full approval of the opening theoreticians, and as a result the Pirc/Modern has had a very long and tough uphill battle towards respectability.  Today, however, the opening  deservedly finds its place in the repetoires of many of the world’s leading grandmasters.


Viktor Moskalenko’s latest book, The Perfect Pirc-Modern , with an introduction by Ivanchuk, is perhaps the first  book  that does not feel a need to  apologetically argue its validity as a reliable opening system and instead takes for granted that such a dynamic opening has a real place in today’s competitive tournament praxis.  That there is a real need for such an opening that does not seek only to equalize…


This book of approximately 250 pages  is written with the same unique style that Viktor has become famous for.  There is something scientific about his writing style, even mathematical.  Precise. Objective. Definitive.  These are the qualities that a modern tournament player  seeks  when choosing his opening repetoire.

About half the book covers the most important line–and most dangerous– against the Pirc/Modern: the Austrian attack. The rest of the book discusses the main alternatives: the fianchetto lines, the classical Nf3 lines, the Be3 lines and the Bg5 lines.  As well as some irregular lines where Black toys with the c6…d5 idea.


Ofcourse, while the book is written from the Black point of view, Viktor’s objectivity does not prevent him from confronting head-on  the annoying  strategic problems and tricky tactical move orders that have caused Black so many practical setbacks in the past.  Each is dealt with meticulously and confidently.  Creatively.  The Pirc/Modern is very much alive!

————————————————–
But this book is not only for the Black side!  There is much new  material and original suggestions for the White player also to strengthen his game.  One from my own practical experience with White:

Viktor and I are team mates (Catalunya Team Championship; eebcn ) and last year he witnessed my game against the resourceful Catalan gm Narciso.  In the above position I thought a while and but played an ineffective 9.Be4, which soon allowed Black excellent counterplay.  But Viktor’s book shows the real problem with the Black setup:
9.h4!

He is right!  I tried to find a hole in Moskalenko’s analysis, but to no avail.  Worse still, he points out that 9.Ne4!? is also a big problem for Black.
—————————————
I recommend this new book to all of my readers who are looking for a ”modern” opening system that meets all of the needs of today’s tournament players!  As well, those White players who want to strengthen their own understanding of this dynamic opening, you would do well to study this book! 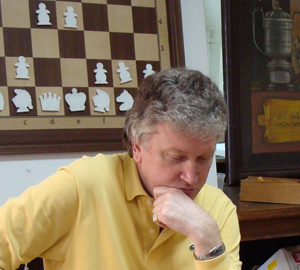 Viktor Moskalenko  , born 1960 Ukraine, has made Barcelona,Spain his new home, where he lives with his wife Tatania and their daughter (who is an architect). Viktor is a respected trainer and a best-selling author.  His previous books include The Wonderful Winawer (2010), The Fabulous Budapest (2007), Revolutionize your Chess (2009) and La Defensa Francesa (2008)