The 4th round of the Catalan team championship took place Saturday, which brought me to Barcelona.  My team ( Escola d’Escacs de Barcelona ) won by 7.5 to 2.5 against Andorra, placing us solidly right behind Sabadell, which won by a score of 6 to 4.

click on to enlarge
I drew my game , with the White pieces, against gm Oscar De La Riva.  A strange game…interesting up to the point that the clock became important.  I held a small advantage, but could do nothing against Oscar’s resourceful play.  Towards the end I was being outplayed, but a draw offer from my opponent brought me back to reality.
The reader can find all of the games played up to and including the 3rd round HERE .  You can download them all in pgn.

click on to enlarge
My team plays all their ”home” games at the very sophisticated and elegant  B,14, a contemporary Art club owned and operated by some chess lovers.  The website can be found HERE
It is very inspirational to play amongst art, whether it be paintings or sculptures or what ever!  The club also has an excellent cafe where one can relax or drink socially.  If you are ever in Barcelona, definitely drop by!
——————————————————————
CHESS  POTPOURRI 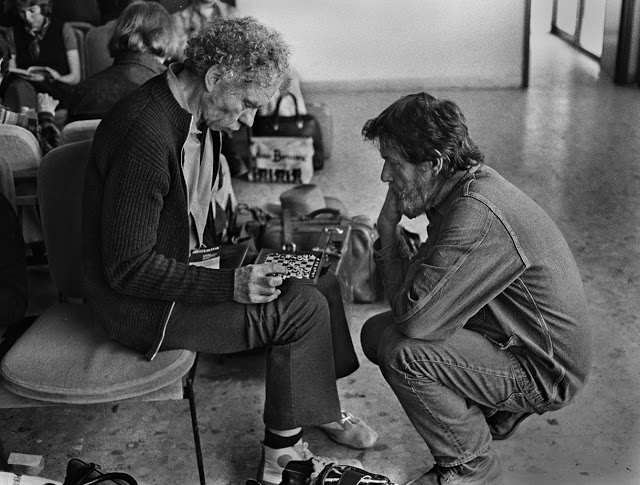 When music and dance  take a breather and play some chess….John Cage (right) playing Merce Cunningham  in Belgrade 1972.  Notice the spontaneity of it all….website
CHESS AND LIGHT

The Chess Game (1955)
Commentary by Barbara Bullock-Wilson
The cottage is frugally furnished. A man and a woman are intently engaged in a game of chess. There are windows, but they offer no views to the outside. The room forms a world of its own with light and shadow, curves and angles. The mood is congenial…contemplative. Time is marked by the captured chessmen on the floor and the side table as well as by the wisp of cigarette smoke that floats over the players.
You don’t need to know anything more about this image to appreciate it. Chess Game, 1955, depicts a quiet, ordinary event with beauty and careful attention.
What we each bring to the viewing experience, however, can add many other dimensions of meaning. And the viewing experience itself can change as our memories and understandings evolve. Up until two years ago, this was a richly evocative portrait of two people I knew and cherished – the poet Eric Barker and my older sister Mimi. The photograph has not lost any of this significance for me, but since the death of Mimi in early 2010, the image has also become a deeply poignant one.
English by birth, Eric came to this country as a teenager in 1921, was naturalized ten years later, and moved to Big Sur in 1953. My father and he met shortly after that and soon developed a warm friendship.
Although he took on a variety of jobs throughout his life, Eric considered poetry to be his true vocation. At the time Chess Game was made, Eric was serving as a caretaker for one of the largest ranches in Big Sur and living in the rustic cottage shown in the photograph. In this position, Eric had ample opportunities to roam the rugged coastal and mountainous environs of his chosen home and write poems, poems that so movingly evoked the place that he became known as the “Poet of Big Sur and Point Lobos”.
There was a powerful affinity between Eric’s poetry and Dad’s imagery and the two were often featured together in the Carmel Pacific Spectator-Journal, a large format publication edited and owned by Thorne Hall who showcased the work of a number of local artists.
Eric, 1955 is another well-known image that Dad made with his friend. (view) He also made a series of head shots that Eric used for jacket covers and book promotions. These portraits reveal Eric as I remember him best. In 1955, I was 10 years old and he had a gentle, attentive manner that put me at ease. His British accent delighted me and his conversation sparkled with tantalizing sentences that fed my already developing love of words.
I didn’t really discover Eric’s poems, however, until I was in college. A Ring of Willows, Directions in the Sun, and Looking for Water became treasured volumes in my library and once, for a journalism class, I designed a small book with some of my favorite poems of his, along with some of Dad’s images. Although the book was never actually produced, it was a joy to immerse myself in the work of these two kindred souls.
Christened Mary Wynne Bullock, my sister Mimi was 15 years older than I. She was Dad’s child by his first wife and, after our Dad met and married my mother, she traveled every year from the East Coast for extended visits with us on the Monterey Peninsula. As a young girl, I found Mimi utterly fascinating. She was tall and slender, wore make-up, and dressed stylishly in store-bought clothes. She smoked cigarettes, drank liquor, and went out with men. She was right out of the movies I watched and fantasized endlessly about.
During her stays with us, Mimi often accompanied Dad on photographic outings. It was one of their special times together. Before returning home for the night, they would frequently connect with one or more of Dad’s friends, including Eric; Ephraim and Rosa Doner; Henry and Eve Miller; Gordon and Amelia Newell; Harry Dick Ross; Edward Weston; and Emil White. For a while, Mimi was even romanced by abstract artist Bob Nash.
Over the decades, my childhood crush on Mimi mellowed into genuine, abiding love. The more I learned about her and the more of life we shared together, the deeper my admiration and appreciation grew. I came to see and value her as someone who had managed to maintain a spirit of generosity, loyalty, and caring in the face of innumerable challenges and sorrows.
In the fall of 2009, Mimi was diagnosed with Stage 4 lung cancer and by March of the following year she was gone. Since her passing, my responses to Chess Game have expanded and evolved. Her cigarette is no longer glamorous. Although the wisp of smoke has not lost any of its grace, I now view it less literally. Even the form of Mimi’s body and the way she is holding her head call forth a range of feelings within me.
When Eric and Mimi started playing a game of chess that day in 1955, Dad saw possibilities for an interesting image. From the exposures he made, he chose the one he liked the best, created the image he called Chess Game, and then launched it into the world. For over 50 years, I have viewed it in a variety of ways – wet from his darkroom, mounted and displayed at home, exhibited in museums, published in books, and reproduced on my computer screen. Although the image itself has not changed, I have. Together we have a rich history, a meaningful present, and a promising future.
~ Barbara Bullock-Wilson
——————————————————————————
Share