Back from another round of the Catalan Team Championship . Round 6, to be exact.  There are 11 rounds in all, and my club  , the defending champion, will likely only finish second this year, barring a disaster or two from Sabadell, which has considerably re-inforced its team this year.

Standings after 6 rounds.  The arrows indicate the most likely 2-teams that will descend the division

My team won with a 7-3 score against Foment

gm  SPRAGGETT
I have played almost every way against the solid Caro.  What can you do?  It is such a solid and reputable defence that I even took it up myself a number of years ago.  Against Andrei Sokolov in the first round of the Candidates Matches back in 1988, to be precise. My trainer at the time, Hungarian grandmaster Andras Adorjan, suggested it to me, as a way to dent Sokolov’s 1.e4 initiative. (Sokolov had beaten virtually every top gm with his 1.e4, including Kasparov and Karpov)  It seemed to have worked…I survived with Black and even won the match in the tiebreaks!

Festival poster; then Canadian PM Mulroney and I after my Sokolov victory
I then included the Caro in my tournament repetoire for  year or so–with mixed results– before giving it up, for no particular reason (I like to vary and experiment in the opening).  I had almost forgotten about my Caro experiences, when in a cafe in Geneva (1995) I was flipping thru  Hagen Tiemann’s magnificent book on this opening …. 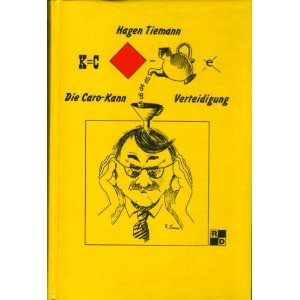 …and noticed that my name was mentioned (!) in the introduction alongside such Caro greats as Capablanca, Botvinnik, Petrosian, Karpov, Seirawan and Kamsky!  I was inspired to be in such exalted company…and I decided to take the Caro up again!
ANYWAY, this has nothing to do with Saturday’s game against Jerez, especially since I was White!  I had recently started studying the 2-Knights System, having tired of the Classical and Advance variations.  Or maybe for simple variety…
Playing mutiple variations against mainline defences seems to be the most successful way of doing things today.  Besides giving some element of surprise value, it forces the opponent into YOUR home preparation and out of his comfort-zone.

In the spring of 1970, at the USSR vs Rest of the World , after taking a year and a half away from international chess, Bobby’s first game was against Petrosian’s Caro.  Here he is thinking before making his first move.  Having already met Petrosian’s Caro  on not less than 3 separate occasions, on this day he decided to try something ‘new’ (Exchange Variation) and won a brilliant game


Bobby Fischer played various systems against the Car-Kann:  the Panov Attack, the Classical Variation, the  Exchange Variation , the King’s Indian Reversed…and the 2-Knight System.  Curiously, 50% of Bobby’s games were with this latter line. I suppose that says something about his faith in it…
BACK TO MY OWN GAME:
After the standard 4.h3 my opponent quickly replied with the sharp 4…Bh5!?

White’s last move is doing well today.  He intends to castle long and use his Kingside pawns to batter the Black monarch’s defences…Although I have little experience in this line (with either colour), somehow I don’t trust Black’s setup: it makes it too easy for White to get the initiative.  And my own experience in the 8.Qe2 Najdorf has shown me that a weakened King position is already winning half the battle…
My opponent surprised me with the little played 12…f5!?:

Although this logical move exists in the data bases, it is not very often played (most seen is 12…Kf7). Black intends to play …Nf6 and block White’s attacking chances. All of this was played at lightning speed by my adversary (who is a Caro expert).  Here I thought a while and decided that White’s most logical way to proceed with the ”attack” was to open the g-file (13.gxf5).  HOWEVER,  after the game (on my way back to Guarda) I realized that White has another way to proceed (perhaps even stronger), namely playing for squares (instead of opening files): 13.g5!?

Black’s  e-pawn as well as the g-pawn  are causes for serious concern.  Should White place a Knight (for example) on f4, then Black will be in trouble.  Trading Bishop for Knight creates other problems (weak dark squares).  Furthermore, and this can be easily overlooked, White has the open e-file and can open the h-file later with h5: Black’s two weaknesses can implode at any moment!
There are a few games with 13.g5, but they are not convincing.  When I analyzed this line, I quickly came to the conclusion that Black’s position is very unpleasant.  Next time I will play this way, though I have no complaint about the game continuation against Jerez.
13.gxf5!?  gxf5 14.Qg3 Kf7 15.Bxc6! Rxc6 16.h5! Nf6 17.Qg6+ Kg8 18.h6 Qe8 19.Qg3! Qf7 20.Bd2 g6 21.O-O-O Kh7

White is a bit better.  Principally, he has the  initiative in an unbalanced game.
I suppose the fast time control (90 minutes for the entire game; plus 30 spm) dictated most of what happened next.  Black did not play the best and White soon had a winning position.  Black created dangerous counter-tricks, but they were mostly bluff:
POSITION AFTER 36 MOVES:

Here Perez had just played 36…Qg5.  White can not take the Queen because it is mate along the b-file!  I played  the cautious 37.Re1 (which thows away my winning game!) when instead I can call Black’s bluff (and win the game) with the curious 37.Qh2!

White defends the Rook on g1 and threatens (this I did not imagine!) 38.Qh1!!!–indirectly defending b1 and winning the Black Queen, which is trapped in most lines.  Black can not get away with 37…Nh5 because of 38.Rf7+ KxP 39.Ne5 with mutiple winning threats.  If instead 37…R8-b7 then 38.Qh1! wins as explained.
The winning manoeuvre Q-h2-h1!!! is very original!  You will just have to play  over the game continuation to find out how I succeeded to win: