http://saintlouischessclub.org/2011-us-championships
The semi-finals of the 2011 US Chess Championship finished yesterday, with defending champ Gata Kamsky defeating his young rival Sam Shankland 1.5-0.5.  The other match (Shulman vs Hess) ended tied 1-1 and will today go down to the play-off games at reduced time controls.

Kamsky’s victory no doubt can be accounted to his superior experience in match play.  His play very much reminds me of the World Champion E.Lasker at his best.  The first of the 2 regulation-time games was aimed at ‘softening up’ his opponent, getting him to question his own chess values.  Kamsky’s play was risky but effective.  It remains to be seen if he was ever lost, once the analysts get to work.
The second game saw Shankland play a bit too passively  and he ended up in an ending where Kamsky’s bishop-pair gave him all of the chances (no risky sacrifice this time!).  A classic technical demonstration.

SHANKLAND
The position is more or less balanced, but probably most GMs would prefer to play the White side.  Rather than play and wait and see type of game, Kamsky embarked on a slightly dubious ”Lasker-style” sacrifice, justified  more on practical psychological factors than on its real chess-value.
17…Bxh3?!

Kamsky was no doubt disappointed that Shankland easily beat off the attack and emerged to an ending where Black  has only some drawing chances (White’s extra piece outweighs Black’s 2 pawns).  A number of spectators were surprised that Shankland did not press home his advantage.  The game was eventually drawn, but Kamsky was the moral victor and went into the 2nd game with more than the usual ‘colour’ advantage that comes from playing with the White pieces…

The winner of the play-off between Shulman and Hess will play against Kamsky for all of the marbles, while Shankland will play the play-off loser for 3rd and 4th places.
[blip.tv http://blip.tv/play/h49RgraXLgI width=”480″ height=”300″]

The Continental Championship in Toluca Mexico came to an end yesterday with one more power-demonstration by the Cuban players.  Though details of the last 2 rounds are less complete than we had hoped for, it appears that 4 players tied for first with 7.5 points: Bruzon (Cuba) , Quesada (Cuba),Vescovi  (Brazil) and Bluvshtein (Canada).  Bruzon came out on top on tie-break and was declared the official winner.

GM L. Bruzon should now be rated 2700-plus after his excellent performance.  Cuba will now have 2 super-rated players. Second place (also on tie-break) went to Toronto’s GM. M Bluvshtein  Congrats!!  According to Mark some of his game scores that were transmitted were imprecise, so I will not give one of his victories here (though I will do so later when the smoke clears!)
http://markbluvshtein.wordpress.com/
No word on how Montrealer Anton Kovalyov ended.  From the webpage of the Argentine Chess Federation it seems that he had 5 points with 2 rounds to go, but the webpage has yet to be updated!  More news on that later…it is unfortunate that the organizers simply lost control of their coverage of the tournament over the weekend!
________________________________________________________________

IM Eric Hansen won the Alberta Closed with a perfect score, thus becoming Alberta’s official representative at the upcoming Canadian Zonal to be held in early May in Ontario.  Congrats!

IM Eric Hansen (born 1992) is currently Canada’s 12th highest FIDE-rated player : 2412.His qualification thru this tournament puts Eric as one of the favourites to win the Zonal.
No doubt Eric will be especially motivated to prove his worth as one of Canada’s top young masters because of how he was cheated out of a qualification spot for Canada’s 2010 National Team.  Readers of this blog will no doubt remember how the Selection Committee ignored its own rules to put a Toronto player in his place! 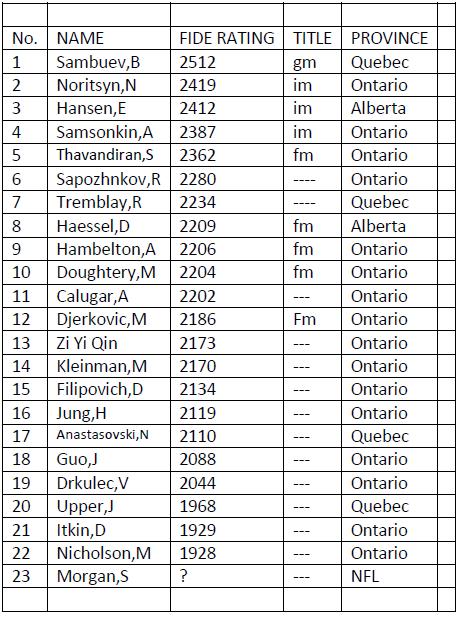 As we can see, the tournament is shaping up to be a wonderful success.  Four provinces are represented (the rest of the provinces disappeared after the last major  tsunami!) Only one of Canada’s gms is playing. No former Canadian Champions…no sponsors, no prizes other than entry fees, no website, no PRIDE!