The game between GMs Yuri Vovk and Krishn Sasikiran at the recently concluded Cappelle tournament attracted a lot of attention.  Vovk’s surprise  attack featured a 2-piece sacrifice.
THE POSITION AFTER 20 MOVES

GM  Y.VOVK
Arising from a Grunfeld Opening, White has managed to place all of his pieces on active squares.  Combined with the mobile pawn phalanx in the centre, the position is ripe for active operations.
21.Ne6!

Clearly Black can not take the Knight as the opening up of the d-file will activate the White Rook and immediately recover the material.
21…Bxc3!?  It is hard to recommed better.  22. e5!  Qb6

Up to now White has played energetically.  Now comes a real surprise
23.Bxg6!!

Ouch!  White threatens an immediate mate and Black has no choice but to accept the gift.
23…fxg6 (taking with the h-pawn is met the same way)  24. Qh6!

Black can only prevent the mate by giving up his Queen!  Saskiran fought on bravely for 36 moves but could not prevent the Queen dominating over 2 pieces. 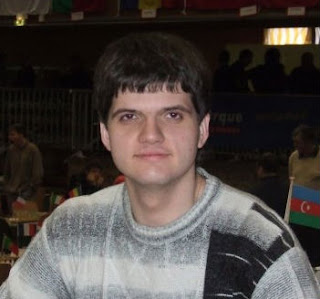 Yuri Vovk  is a Ukrainian chess player. He was trained by Vladimir Grabinsky, coach of the Ukrainian youth team. He became a Grandmaster in 2008, at age 20.His major success has been the victory In February 2009 of the colossal Cappelle-la-Grande open in France, above 106 Grandmasters and 76 International masters (610 players), with 7.5 points out of 9. (wiki) 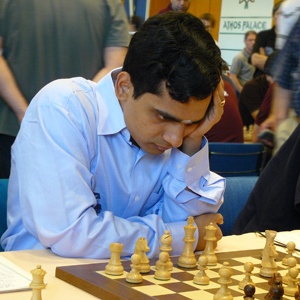 Krishnan Sasikiran (born January 7, 1981) is an Indian chess Grandmaster. Among Indians, he is second, after Viswanathan Anand in FIDE rating as on march 1 2010.”Sasi”, as he is sometimes called, comes from Chennai in Tamil Nadu in south-eastern India. He earned the Grandmaster title at the 2000 Commonwealth Championship. In 2001, he won the prestigious Hastings International Chess tournament.
In 2003, he won the 4th Asian Individual Championship as well as the Politiken Cup in Copenhagen. Sasikiran tied Jan Timman for first place in the 2005 Sigeman Tournament in Copenhagen/Malmö Denmark. In 2009, he tied for 2nd-3rd with Étienne Bacrot in Antwerp. (wiki)