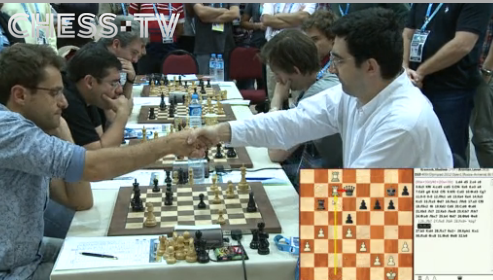 After a quiet opening, it seemed as though Aronian’s famous sense of danger escaped him and he soon found himself in desperate straits…
POSITION AFTER WHITE’S 21st MOVE:
gm ARONIAN

gm  KRAMNIK
Here Black must play 21…b6 , not allowing the White Knight any access to a5 or c5

INSTEAD,  Aronian played 21…Rc7?! where upon Kramnik struck with the very strong 22.Na5!!

This idea must have escaped the Armenian superstar.  Perhaps Black is already lost!

A startling move that sacrifices a piece for 2 passed pawns on the Queenside.  Curiously, Aronian was unable to untangle his pieces quickly enough and Kramnik simply advanced his b-pawn.  Aronian resigned when the pawn reached b7.