Russian super-star Vlad Kramnik  mopped up in Dortmund a few days ago …even though he lost the last round game against the US star Nakamura it made absolutely no difference since he was so far ahead in points. Kramnik has now won the Dortmund tournament a record 10-times!  Congrats.
Below is an video interview with Kramnik shortly after his historic win.  I found it very interesting , especially because of his modesty and sincerity. 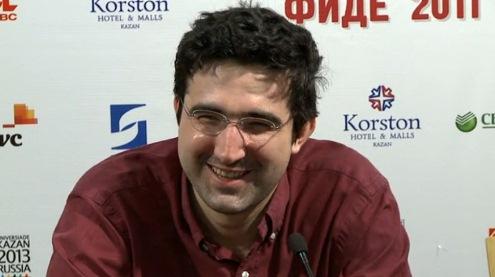 Today on the new website Why Chess? excerpts of a Russian interview were translated.  Kramnik talks of many things, including Carlsen, his rating, the future of chess, spectators, culture  and more.  Enjoy!

Dortmund – “that game” against Hikaru Nakamura

”The motivation in that game was perhaps different. The thing is that in my whole professional career I’ve never scored +6. There aren’t many people other than Kasparov who’ve ever scored +6 in a supertournament. I’ve had +5 a few times, but never +6.
That might have been the motivation – not to post simply a good result, but a truly exceptional one. So perhaps I took too many risks and, for example, rejected all the drawing variations. I didn’t even look at variations where there was perpetual check, because I’d just decided to keep going… I wasn’t intending to sacrifice at all (especially as that’s not the best method of playing for a win against Nakamura), but simply by the point I sacrificed a piece I didn’t have any other sensible plan to play for a win. Nothing at all.
The opening went badly, unfortunately. 23.Nxg5 is a perfectly playable move. Objectively speaking, it’s probably not very good, but I think it’s the kind of thing you can play.”

Ratings and competing with Magnus Carlsen
”I’m quite sceptical about ratings in general. My rating only starts to worry me when it gets dangerously low. I’d put it like that. And 2800 or 2810… Perhaps first place in the rating list might be some sort of motivation for me, but for now that’s quite far off. And other than that – no, it doesn’t play a big role.”

Is being overtaken by Karjakin counts as “dangerously low”?

”No. It was dangerously low when it was 2727 – when I was unwell but nevertheless decided not to decline tournaments in 2005. I participated in a series of tournaments and played terribly. I simply made the crudest of one-move blunders very frequently, and I fell to eighth place on the rating list, with 2727. Now that was becoming dangerously low.
But Sergey getting a little ahead of me – firstly, it’s only a few points. Secondly, it’s clear that the new generation is very strong, there’s powerful competition and no-one’s insured against falling from fourth to sixth and then rising up to third… The whole top ten is very strong. Of course, if my rating falls to something like ninth, then it would begin to concern me.
But third, fourth, fifth – that’s not so significant. Being close to 2800 is a perfectly decent rating. I don’t think I’m playing at Carlsen’s 2825 at the given moment, so…”

Is Carlsen is playing at that rating?

”Overall, yes. I think he selects his tournaments cleverly, and in those tournaments he really does play at 2825. If, let’s say, you take a double round-robin tournament with the top 6 in the rating list, then I’m not convinced he’ll be able to hold onto such a rating. It’s a question of his style of play – he’s very good at cleaning up against the tail-enders. But firstly, that’s a hypothetical debate, because if he’s got that rating it means he’s playing at it.
You can only keep such a high rating or increase it, of course, with very good and clever tournament selection. He’s playing great just now, you can’t deny that, but I think in a match I can compete against and beat almost anyone, including Carlsen. I’ve got chances, let’s put it like that. In tournaments, particularly unbalanced ones – it’s unlikely I can compete long-term with Carlsen. In any given one – or two – then yes.
But overall, in terms of the ability to get a clean sweep against those who are weaker than him he’s of course better. So at the given moment… I can’t say my goal is to be number one on the rating list. It’s pretty unlikely. But getting above 2800 – that’s entirely doable. I just need to improve in one or two areas.”

A large section of the interview was taken over by topics that are more specifically Russian. For instance, Kramnik has attracted criticism for choosing Dortmund over the World Team Championship in China, and has been accused of a lack of patriotism in some quarters. He responded by noting Dortmund was arranged long before he knew about the Chinese tournament, and that he is, in a sense, the “face” of the tournament. On patriotism he notes he received no money at all from the Russian Chess Federation from 1992 – 2008, and sums it up:

”Our top players didn’t receive a penny, or even the slightest attention. And in reply we nevertheless played for our country, no-one changed federation, and so on. In my view that’s patriotism, as I understand it.”

He notes there’s been a populist note to criticism of the Russian team’s performance in Ningbo (he almost certainly has in mind e.g. Anatoly Karpov calling it “shameful”). Although he accepts not finishing in the top-3 is a failure, he rejected comparisons with how the team used to perform, pointing out things were utterly different when the USSR still existed. The former Soviet states are now Russia’s main competition.
On the “lack of a team leader” (a frequent criticism of Kramnik’s role in the Russian team) he says the important thing is playing well, not making rousing speeches. He doubts players nowadays would accept a leader like Kasparov, who would often decide on the team line-up himself.

”If it wasn’t the Russian Championship, if it was simply a tournament under those conditions, then I’d never agree to play. The terms are very low for me. But it’s not a question of that. As I said: it’s Russia and I’m playing for the team, I’m playing under the country’s flag, and of course that’s a slightly different situation.”

Since the perceived failure of the Candidates Matches in Kazan, we’ve had no shortage of suggestions about what needs to change. FIDE President Kirsan Ilyumzhinov gave an interview where he talked about moving away from classical chess towards rapid and blitz. Rustam Kasimdzhanov wrote an open letter suggesting no encounter between players should end in a draw, with drawn games replayed at shorter time controls until a winner was found. A couple of days ago Sergey Shipov offered an improvement on Kasimdzhanov’s proposal, suggesting quicker games (to avoid exhaustion) and a points system that still favoured a win in classical chess.

Kramnik’s response could be summed up by an American phrase he uses at one point: “If it ain’t broke, don’t fix it”:

”You shouldn’t have a format where draws are relatively favourable to both players – as was the case in Kazan. That was a knockout. The fundamental difference was that it wasn’t actually a match event, but a knockout tournament. I think that format’s simply unacceptable in modern chess, particularly for deciding the classical World Champion, as it’s clear that no-one wants or can allow themselves to take too many risks. You end up with draws and everything’s decided in some chaotic blitz game.”

Kramnik questioned whether it was really necessary to make it so that every encounter between two players ends in a win for one of them:

”I don’t agree with that. I don’t understand why it’s necessary. People play football – draw. A normal result. No-one groans about draws. So you can have a draw but a good match that everyone enjoys watching. It’s an American approach. It seems to me that in principle the kind of audience that simply must have a winner isn’t really our audience. Because our audience involves a certain level of culture, people who are interested… I’d even say more in the process than the result. That’s our real “hardcore” audience, as they say in English. The one we should maintain and increase.”

Is the problem that the audience is too small?

”Firstly, I wouldn’t say that it’s such a small audience. Secondly, what do we need: quantity or quality? Do we really need another two million people who, chewing popcorn, will stumble across a chess match, get slightly excited by watching the pieces fly around, and then forget about it completely the next day? Is that what we need? I’m not convinced.
In general it’s quite a complex question. It’s not entirely clear that chess is something which can adapt to an audience of millions or billions. I don’t think it’s like that. Chess is an intellectual activity and, like any other intellectual activity, it’s elite. Perhaps that’s not exactly the right word, but I don’t think it’ll ever fill stadiums – that’s simply unrealistic.
It’s too complex – chess has certain limitations, but also undoubted advantages. Chess is very strongly connected to culture, to possessing a certain intellect. That’s our feature, our trump card. And giving that up and exchanging it for some sort of mythical popularity among people who like, let’s say, baseball or basketball… I don’t know – I’m very sceptical about the idea that they’re all going to rush out and play chess and will be incredibly interested in it.
I don’t really agree with that whole approach. I’d choose a different niche for chess. That niche would instead be cultural. Culture, the intellect, perhaps certain computer technologies – that’s more our niche. And the niche of chess as a pure sport… If you increase the sporting element in chess I think we’ll lose a lot by that and it’s not clear what we’ll gain, because chess will never compete in terms of audiences with football, tennis and so on. That’s a fact. So I’m not convinced it’s worth trying.”
_______________________________________________
Share