LINK
The traditional 5-round St.Jean tournament attracted 86 players including 2 GMs and 1 IM, with play divided into 2 sections.  A total of $4,000 prize money was awarded, with first prize receiving $1,000.  Chief arbiter was Mr. Boutin (link above)

Former Canadian Champ IM Jean Hebert created a mini-sensation by crushing the current Canadian Champ Bator Sambuev in the 4th round in only 26 moves.  This put Jean into pole position in the last round against GM Kovalyov, who was a half-point back.  The latter prevailed after a tough struggle, winning the tournament by half a point over Hebert, Sambuev, Bolduc and Massee.


Hebert emerged from the opening with a clear advantage when Sambuev got caught in an opening ambush. 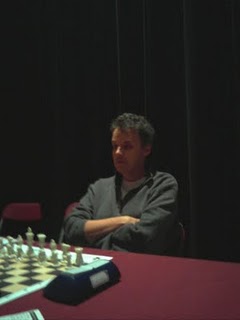 Black’s last move (11…Qf7) won some games a couple of years ago and forced the White players to take a serious look at this position.  Sure enough, in 2010 it was discovered that 13.Qf3 is the best move, and is almost winning by force after 13…fxe4  14.Nxe4!

It is always nice to play White in the last round , especially when you are playing the tournament leader.  The opening was a popular line of the slav defence where White gets the 2-Bishops but Black has a very solid position and can simplify the pieces.  Hebert seemed to be quite ok for a while, but then he started to loosen his position, first with a Queenside advance of his pawns and then with f5.

Both players started to make small imprecisons and quickly Kovalyov’s advantage dissipated when Hebert got some counterplay.  Probably in time trouble, Hebert missed a good chance to draw the Rook and Pawn ending and afterwards Kovalyov increased the pressure.  (Note: the final moves have not been recorded; the final position is probably a win for White with best play, though not at all easy ) 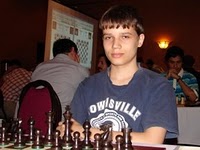 GM  KOVALYOV
Here Black can get much needed counterplay with 54…f4!  (threatening f3 in many lines), after which he has every chance to draw.  INSTEAD, Hebert played 54…Rxb4? and after 55.Rxe5 White has excellent winning chances in a 4 vs 3 ending (all on one side) due to Black’s Pawn weaknesses