GM J.Klovans (April 9, 1935 to October 5, 2010)
The year is not yet over and already it is clear that 2010 will go down in history as one of the saddest years in terms of the disappearance of  famous chess players﻿: Smyslov, Lilienthal, Jakobsen,Larsen — just to name the ones can come to my mind right now.  To this we must now add the Latvian grandmaster Janis Klovans, age 75 years.

Janis was born in Ruba, Latvia on April 9, 1935.  Of the same generation as Mikhail Tal (Riga, 1936), Boris Spassky (Leningrad 1937) as well as Victor  Korchnoi (Leningrad 1931) and Tigran Petrosian (Yerevan 1929). Soon to prove themselves the most gifted generation of post-second world war chess…

But Klovans was never to shine as brightly as the illustrious names mentioned above.  He  took up the game a bit later than them,  at age 14, and only became a master at age 25, soon after completing his university studies in economics. He gained the IM title at age 42, and the GM title at age 62 (!), soon after winning the first of 3 World Senior Championships!   As he himself once said in an interview: ”In my life big results tend to come late.”
But in between all of these achievements, Janis also had a rich and  active life.  He married and had 2 daughters.  He served in the Russian army for ages. But his passion was always chess.  Janis was  a busy tournament player and won a total of 9 (!) Latvian championships and even participated on the Latvian National Team in 2 Olympiads (1992 and 2000).  He was also an active coach at the principal chess club in Riga, influencing future generations of Latvian stars, including Alexi Shirov.

“In chess he taught me above all objectivity and the means of seeking the truth.”  –Alexi Shirov, upon learning of Klovan’s death

I met Janis several times at the Cappelle La Grande tournament in France, and had the pleasure to play him in 2005.  I did not realize that he was 70 years old at the time (!), he was in such fine physical shape, energetic and still capable of playing 2500-plus chess for 5 or 6 hours in a row, day after day!  Our game was a hard fought draw where I had to find some excellent moves towards the end to avoid getting the worse of it…

”Chess has long become the main meaning of my life.    Although friends ask, “aren’t you bored of moving the pieces around after so long, when will you finally be able to do it?”     Chess for me isn’t work at all, but complete relaxation. Moreover, it helps to keep your mental faculties active.
I also work a lot with students. It’s encouraging that the young take a lively interest in chess as it means that it’ll continue to develop in Latvia.”
In an interview with Dmitry Mart on Klovans’ 75th birthday this year, 9 April 2010,
_____________________________________________________________________________
To all of this above, it should be understood that Klovans lived in a country that was strongly influenced by  cold war politics and Soviet interests… as such his chess career was very much dictated by  the Latvian authorities.  Janis was given very little room to manoeuvre, and since he was  always in the shadow of the ‘magician from Riga’, Mikhail Tal, he had to be content with second best choices and second best opportunities.  Until the disintegration of the Soviet Union in 1991, Janis was not allowed to travel to the west, and even today he is relatively unknown in the west.
Such practical difficulties and painful realities explain why Klovans earned the GM title so late in life.  Doing so in your 60’s is unheard of, and requires tremendous character!  But when Janis was younger  there were few real opportunities for him to show what he was capable of.  Ofcourse–in truth– his play was of GM strength 2 decades before he gained the title!
In those days, however,  the GM title could only be earned in strong international tournaments–round robbins–and in the Soviet bloc there were actually very few international tournaments; players such as Klovans found it difficult to be invited inlight of the number of established superstars within the Soviet chess pyramid who had first choice.   Today’s youngsters have very little idea of how much the GM title has been watered down in recent years because of the relaxation of  criteria, or of how difficult GM-norm possibilities were to come by before they were born.
Twenty-five years ago– even in the west– the GM title was not so easy to attain as it is today.   For example,  I only officially became a GM after I had already qualifed for the Candidates Tournament in Montpellier (1985)!  Today players can become GMs by getting their friends to organize minimum standard open tournaments and then only invite friendly players who understand why they are being invited…. 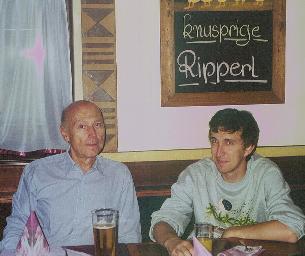 Drinking a pint of beer with GM Burmakin
My Montreal readers , who remember Igor Ivanov when he first arrived  in Canada in 1980, can  understand this situation that I am describing…

Igor was then a completely unknown 33-year old master who defected on his way home from Cuba when his plane landed in Gander.  Igor had only been allowed to play outside of the Soviet Union by virtue of having defeated Anatoly Karpov in a team event, and he probably realized that this was his first and last opportunity…so he grabbed it!
Within a year of his defecting, Igor was already the very best tournament player in North Amerca (with the exception of Bobby Fischer–who wasn’t playing anyway), having won virtually every major event!  He only gained the IM title in 1981–at the Canadian zonal– when he was clearly a 2600-plus strength player.  The following year he needed to win against Boris Spassky in the last round of the Toluca Interzonal in order to qualify for the Candidates….but he only drew!
Returnng to Janis… Klovans was an enormous chess talent in his own right, but he was probably born at the wrong time in the wrong place.  He was eclipsed by players of a incredibly talented generation that produced more world champions than any other at any time, before or since.  Probably never again will we see this.
When the cold war came to an end, Janis was already way past his peak.  Remarkably, however, his skills remained at quite a high level until the time he died.
_________________________________________________________
SOME OF MY FAVOURITE KLOVAN GAMES
Needless to say the name Janis Klovan was familiar to me since my youth.  Klovan had a classical style of play, but was especially noted for his keen tactical sight of the board.  As a result, he played an awful lot of great attacking chess , especially in the Sicilian defence.  Any player interested in studying the art of attack would do well to play over Klovan’s games.
__________________________________________
POSITION AFTER BLACK’S 17th MOVE

KLOVANS
Black is about to castle and together with his pressure along the c-file and the long diagonal (a8-h1) he will have a great game.  For this reason Klovans embarks on a brutal speculative attack to draw the Black monarch into the open and hope that his opponent will not be able to navigate the complications…

You must understand that all of this is in the spirit of sacrifice!  This makes Klovan’s achievement even more remarkable…Black can now decline the Bishop and retreat to e8 with a complicated game, but instead he wants to call White’s ‘bluff’…
19… Kxe6!? 20. Qg4 Kf7 21. e6

So White recovers one of the sacrificed pieces.  Now Black must retreat his King to e8 with an unclear position.  INSTEAD, Black makes what appears to be the natural move, and this fully justifies White’s previous play!
21… Kg8? 22. exd7

What else?  Black must deal with White’s threats along the open e-file.
24. Rxe4! Qxe4

A beautiful  end to a magnificently conducted speculative attack!  The White pawn will Queen or Black will be mated. And in the best of circumstances, Black loses too much material…
[1:0] 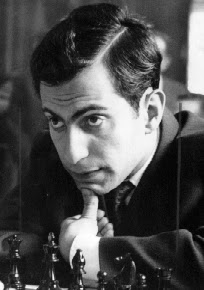 The legendary Mikhail Tal and Janis Klovans played many games together and few ended in draws, as is fitting when two great attacking players are paired against each other!  Below are 2 of Klovans most memorable wins against the magician from Riga. 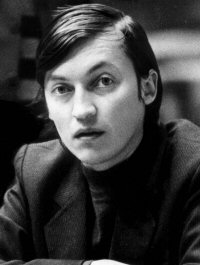 Though Karpov was a young grandmaster at the time, he was already a good bet to be a future world champion.  Klovans defended well in an exchange Spanish opening and ,when given the chance, took over the initiative and delivered a painful defeat to Karpov.  This was to be the last time Karpov played the exchange variation in a serious game!
BLACK TO PLAY
KLOVANS

KLOVANS
A good example of why you should not provoke an attacking player!  Here Klovans, in a correspondence tournament (Janis was a respected IM in correspondence chess!) plays a very important theoretical game

The idea is typical of many Sicilian sacrifices: open the lines to get at the Black King. It is remarkably effective here…
14… exd5 15. exd5 Rhe8

Black probably thought: ”So what?  Your sacrifice hasn’t impressed me!”  Now comes the surprise!
16. Rxe7 !!

The smoke has cleared and Black is dead lost!  White not only has 3 pawns for the piece, but his 2 Bishops wreck havoc on the Black position.  White won just a few moves later.  Find out how !

KLOVANS
Something has gone wrong with Black’s opening.  Klovans hits upon the winning idea (Black’s f6-square is undefended) and proceeds to rip open the centre with a Knight sacrifice!
13.Nfxd5!  PxN 14. Nxd5 Bg7 (what else?)

An important theoretical game!  Klovans has wrestled the initiative but White is putting up stiff resistance.  Black now has a shot that decides the game!
BLACK TO PLAY AND WIN!

White was beginning to find it uncomfortable the ease with which Klovans was re-grouping his pieces near the White King, and for this reason he sought to force exchanges.  A very unpleasant surprise awaits grandmaster Furman!
22… Nf3 !!  Ouch!

Don’t you just hate it when your oppoents show no respect to your own threats!  Klovans threatens mate in one move.  The Knight can not be taken as then the Black Bishop, Rook and Queen will soon feast on the exposed King’s carcass…
23. g3 forced

White is attacking the Black Queen.  Surely the Queen must retreat…?!
23… Rh6 !!

All of White’s illusions vanish with this move!  The White King suddenly  has no defence
24. h3 what else?

Precise to the end!  White gets mated…1-0