Well, nobody really likes Monday.  But is it so bad?  Atleast this Monday is the FIRST Monday of the month of April. So…atleast there is hope out there that this Monday will be better than last Monday…
As appears to be the case on this blog, Monday is a good day to re-cap what happened in the world of chess last week.  Also, Monday serves to remind some of my pet peeves (read: people) that they are not forgotten and that I still think of them from time to time…
________________________________

http://www.europechess.net/
Last week, between the 28th and 30th, during the European Individual Championship in Aix les Bains an extraordinary meeting of the ECU took place to discuss new business.  In particular, the ECU president–the controversial Silvio Danailov–wanted to introduce 4 items into the agenda:
1)implimentation of the Sofia Rules
2)implimentation of the Bilbao Rules
3)new dress code
4)copyright issues
Chessbase reported that the president of the Turkish Federation (Ali) threatened to sue the ECU if Danailov tried to force these issues thru the ECU without adequate discussion and debate.
So it all seemed that Danailov was going to succeed in getting significant press coverage for the ECU extraordinary meeting.  This did not materialize.  Nor have any of the chess sites that I often visit have any detail on either the debate or the outcome of the meeting!  Not even the ECU website (link above) carried any details.  So much for the miracle of the internet age…

ECU prez Danailov: Failed to live up to his reputation
I don’t really have any official information of the ECU meeting, though this past weekend I spoke with the Portuguese representative (Dominic Cross) who attended the meeting.  According to Dominic, Danailov removed the Bilbao Rules from the agenda (a good thing, as I wrote last week of some of the negative aspects of this proposal), and the copyright issue was really just about the right of transmission of live games and not about the copyright of chess games.
So no real controversy there.  The Sofia Rules were accepted for top level tournaments in Europe, as were the recommendations concerning a dress code for these tournaments.

What does this mean for Europe’s chess grandmasters?  Does it change anything?  Well, first let me preface this by saying that these ideas are not new and have been around for as long as I can remember.  When I played against Andrei Sokolov in the candidates’ matches (St.John 1988) a dress code was in effect, but Timman refused to wear a tie!

If I understood everything that Dominic recounted me this weekend, the new dress code does NOT make the use of a tie mandatory.  So I just assume dress code means no jeans and sneakers.

As for the Sofia Rule, short draws are difficult to deal with in large open tournaments since the arbiter(s) is usually busy with more important things to do than in trying to spy on the grandmasters and make sure that they make a real fight of it.  Besides, since the most popular reasoning for the Sofia Rules — that short draws are bad for spectators and sponsors– fails because most spectators in tournaments are infact chess players themselves (!) who understand why short draws are sometimes necessary.  And , of course, most sponsors are infact non-existant in the first place!

Personally, I have nothing against fast draws, providing it is done for strategic-tournament reasons.  Often a draw guarantees a player qualification to an important tournament and is all part of the player’s objective in playing in the tournament in the first place.   Or sometimes a player has had an especially difficult run and is exhausted and needs an early night to recover before the tournament is over.

Ingeneral, each case is potentially different and it is dangerous to have a ”one rule fits all circumstances” attitude. However, something should be done for those cases where 2 players simply chicken out and are afraid to lose rating points.

My personal recommendation is taken from observing monks in mediation classes: the chief monk walks around with a bamboo stick , observing his students’ efforts in mediation.  When he feels that one is not trying as hard as he should, he gently taps the student on the shoulder as a reminder of the point of the exercise.

The European Individual Championship came to an end this past weekend, with 3 players tying for first prize. The Russian born Potkin won the title on tie-break over the Polish GM  Wojtaszek  and the number one rated female player in the world, the Hungarian Judit Polgar. 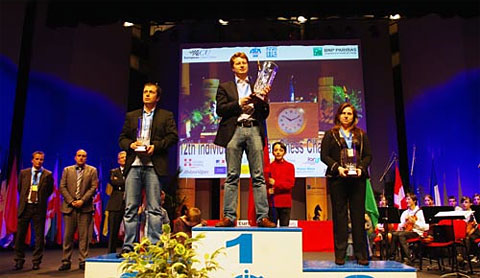 The prize ceremony was done with style and grace, as fitting for the strongest open tournament of the year so far.
A total of 23 players qualified from Aix les Bains for the upcoming World Cup, to take place between August 26 and September 21 in Khanty Mansiysk.  The tournament received excellent coverage in the world’s chess media, complete with daily videos and reports.
I especially liked the high qualify reporting done by the team from Europe-Echecs, headed by Robert Fontaine.  About as good as anything that you would find in golf or tennis!  Here are the final 2 rounds’ reports.
[youtube http://www.youtube.com/watch?v=EnJhLDtx3nY]

Both zonal championships are soon to begin, with the US Championship starting on the 13th of this month and its Canadian counter-part about a month after that.

Both tournaments are qualification events for the upcoming World Cup in August. I believe that the US Championship qualifies 6 players (though I stand to be corrected), while the Canadian Championship qualifies just one.  Which makes sense, ofcourse, since the USCF has close to 100,000 members and more than 50 GMs.  The CFC struggles to have 2,000 members and has just about a half-dozen active GMs.

http://saintlouischessclub.org/2011-us-championship-information
But the differences don’t stop there.  This year’s US zonal boasts a $166,000 prize fund and the organizers have spent months preparing for the event,regulary updating a really excellent website and generating media interest.  Almost all of the top active players in the US are participating.
The Canadian Zonal, on the other hand, is a black hole: there is no website, no media press releases nor even will the CFC make public the names of the those who have entered (it is an open swiss tournament). There are no sponsors (I mean real sponsors) , and the prize fund of a meagre $4,000 is 100% based on entries ($250 a shot).  Making things even more ridiculous, if less than 30 paying entries participate, the prize fund will be proportionally reduced!

Ofcourse, the CFC is a poor organization compared with the USCF.  But what really pisses off most CFC members (including yours truly), is that the CFC leadership really does not try to hide the fact that it could not give a shit about its national championship.
That , to my mind, is a very un-Canadian way for a national federation to behave.
SPRAGGETT ON CHESS
Share