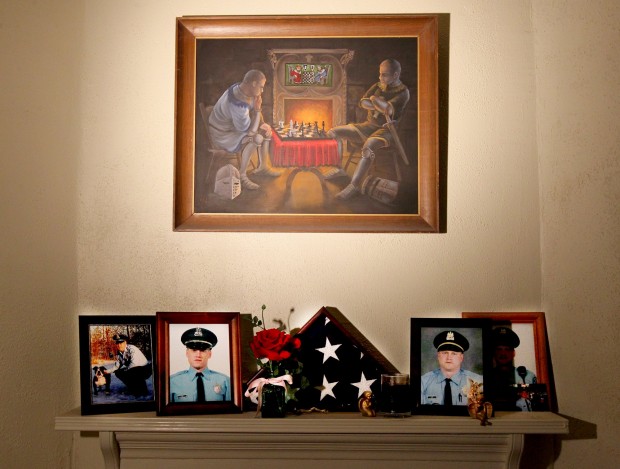 A self-portrait by Sgt. William Vize showing himself as a knight playing chess against himself. The photo hangs in the living room of his home in St. Louis. Below the painting are pictures of Vize in his police uniform from his 17 years of service in the St. Louis Police department. Vize took his own life in December.
(Full story at the link below:http://www.stltoday.com/news/local/crime-and-courts/article_0166a14c-fef0-5b3d-b0f5-110292423e84.html)

Police had little to go on the morning a man walked into a Fairview Heights military recruiting office near St. Clair Square and jabbed scissors into an Air Force staff sergeant’s thigh.
The Oct. 19 stabbing puzzled police, who said it appeared to be an unprovoked encounter between strangers. Without strong witnesses or surveillance video, police leaned heavily on the victim’s memory.
Detectives called on Special Agent Mike Lewis, a forensic artist and crime scene investigator with the Illinois State Police, who dredged the recruiter’s memory for clues to produce a pencil sketch later distributed to the media.
“Usually, it is a last-ditch effort when all other leads are exhausted,” Lewis said. “I was really comfortable with the sketch and the recruiter was really happy. What he described to me is what he saw.”
Even so, the sketch produced only a couple phone calls from the public and has yet to lead to an arrest in the case.
The classic police sketch as crime-solving tool may be yielding to technology in a time of nearly ubiquitous video surveillance and computer software that have made it easier for police to identify suspects faster. Also, departments facing shrinking budgets are reluctant to invest in a trade some say has ambiguous results.
“We’re a dying breed,” Lewis said. “There’s a trend going away from the old-fashioned way and going to computer programs instead.”
Although it’s unclear exactly how many law enforcement agencies employ full-time forensic artists, the International Association for Identification has certified fewer than two dozen since 2004. Police say the field is tiny because demand for the composites remains low and because only the nation’s largest agencies have the resources — or enough cases — to make it worthwhile to employ a full-time forensic artist.
Instead of using a forensic artist, many police departments in the St. Louis area and nationwide now use facial composite software, such as Identi-Kit and Faces 4.0, which plug into online databases of facial features and hairstyles. The advantage, police say, is that almost anyone in the department can produce a composite by mixing and matching those features with little training. The St. Louis, St. Charles, Jefferson and St. Clair county sheriff’s departments are among those that use computer software.
“It’s a huge database now,” said St. Louis County police crime scene investigator Dalen Schmoll. “You don’t find a lot of artists in police work, so departments have found it easier to just input information into a computer.”
Critics of the software, however, say the programs fail to accurately depict someone’s face and cuts out the crucial interaction between artists and witnesses.

William Vize at work
“Computers are never going to replace the human element because there’s so much in the interview techniques that are equally important to the artistic ability,” said Bill Vize, a city police sergeant who has drawn sketches as needed for years.
Several forensic artists interviewed by the Post-Dispatch, including Vize, said the forensic artist’s skills include cognitive interviewing techniques that sometimes narrow the field of possible suspects or reveal a witness’ attempt to deceive police.
Some departments haven’t recognized the value of a forensic artist because they’ve never tried using one, said Don Stahl, a detective in Charles County, Md., and committee member for the International Association of Identification. Police departments that use them ‘swear by them,” and those that don’t can often find capable artists within their own ranks, Stahl said.
Stahl pointed to police sketches that helped raise public awareness in the high-profile cases of “Unabomber” Ted Kaczynski and Oklahoma City bomber Timothy McVeigh. However, Stahl cautioned that sketches are typically a small piece of a larger investigation.
“No one’s arrested solely on the basis of a composite sketch,” Stahl said. “When we get a hit on a composite, there will be some other piece of knowledge that helps them say, ‘I know who that is.’ The composite sketch is a means of advancing the case to the next level.”
Lois Gibson, a full-time forensic artist with the Houston Police Department for more than two decades, believes police departments could solve more cases if they replaced composite sketch software.
“Human beings are so tuned to human faces that they can instantly come up with a name, location or owner of that face,” Gibson said. “You’re missing a big chunk of your investigative arsenal if you do not have a sketch artist.”
And the duties of today’s forensic artists go beyond traditional police sketches. They also provide age progression of pictures of missing or abducted children and reconstruct faces of unidentified bodies and murder victims.
But the field still faces challenges, increased surveillance and concerns about effectiveness among them.
“There’s just not much demand for it anywhere because there’s so much surveillance everywhere,” said Lt. Craig McGuire of the St. Charles County Sheriff’s Department. In addition to the increase in surveillance, McGuire said victims already know the assailants in a vast majority of crimes the department investigates, making composites unnecessary.
His department has computer software for composites but rarely chooses to use it, much less hire a flesh-and-blood sketch artist.
Some police say departments avoid sketches because the time to produce them can bog down an investigation or even hurt a prosecutor’s case if a poorly drafted sketch doesn’t seem to match the person charged with the crime.
Police “may be damaging their case by cranking out a composite that’s not any good,” said Detective Paul Moody, a former Illinois State Police officer who is now a full-time forensic artist in Palm Beach County, Fla.
In the 1990s, Vize said he sometimes drew three sketches a day, mostly for robberies, rapes, assaults or unidentified bodies. Even accounting for the fact that St. Louis police also have used another volunteer forensic artist to sketch suspects in sexual assault cases for the last two years, demand for Vize’s skill has gone down. This year, he said he has been asked to produce just one sketch.
“Most police departments in the area don’t appreciate it or understand it,” Vize said.
With interest in the craft languishing, Vize and Lewis have discovered their skills more in demand as a curiosity in an art museum than for their value in police work.
The two are participating in an interactive exhibit at the Mildred Lane Kemper Art Museum at Washington University in which they interview museum visitors about their first loves and then sketch portraits based on the interviews. Dozens of sketches will be on display through Jan. 10.
BY JOEL CURRIER • [email protected]
Share