If Morphy were still alive… 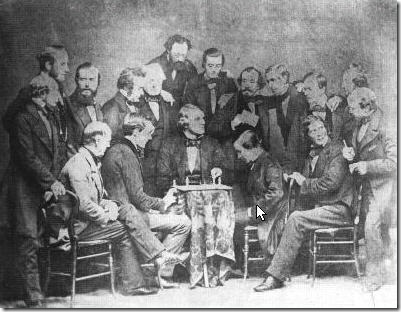 Morphy vs L. Paulsen in 1857
The legendary Paul Morphy developed a well earned reputation for not just quickly dispatching his opponents but doing so with elegance and joy.  Many of his finest games will be included in best games collections for thousands of years to come. Who can ever  forget Paulsen vs Morphy in New York 1857, where the American genius’ surprise Queen sacrifice baffled everyone, or Morphy vs Duke Karl Count Isouard at the Paris opera the following year where Morphy sacrificed one piece after the other and delivered mate in just 17 moves?
Spectators naturally love a good attack, executed with flair, precision and finesse.  Piece sacrifices are not absolutely necessary, but they do add a touch of immortality to the outcome.  Witness yesterday’s game between the English grandmasters Mickey Adams and David Howell, where Howell’s kinside is demolished with a steamroller as he gets mated in just 28 moves.

While I am often critical of organizers who only invite a handful of players to tournaments with prize funds ten times larger than most common grandmaster tournaments, I have to admit that  the London organizers have managed to put together a very interesting tournament.  It is a great pity that it will be over in just one week!
The tournament pits 4 of England’s hottest players (Adams, Short, McShane and Howell) against 4 of the very best players in the world (Anand, Kramnik, Nakamura and Carlson).  It is difficult (if not impossible) to predict who will win the 50,000 euro first prize, but after seeing Adams’ game yesterday I will put my money on him!  It seems only fair that if an Englishman must win the tournament, then Mickey it will be….

Mickey Adams is having a great year. Will he pull it off with a victory in London?
GM  HOWELL

GM ADAMS
Howell tried to surprise the more experienced Adams by playing a very old line of the Berlin Defence that is rarely seen today, and certainly not in Howell’s repetoire, before now anyway.  His 5…Be7 used to be considered the mainline more than a century ago, championed by the great Lasker himself.
I am a bit surprised that Howell would want to play this way in the first round of such an important tournament, especially with most of the world watching and naturally wondering why such an inexperienced GM would be invited to such a star studded tournament.  The opening is , infact, very difficult to play with the Black pieces and Black must often resort to tortuous manoeuvring before finally getting an acceptable position.
Howell said after the game that he had been taking a look at this line several weeks before the start of the tournament…be that as it may, I would have thought that he might have realized that Black’s life is not a bed of roses and almost any other opening would be easier to play…perhaps after his trouncing in this game he will see the light!?
6. Qe2 Nd6 7. Bxc6 bxc6 8. dxe5 Nb7

Believe it or not, this used to be very popular!  Ofcourse, Black’s position is not very appealing at present, but the potential offered by  the 2 Bishops and  compact center pawns was very attractive to players like Lasker who would not mind getting their hands dirty in the midst of a good fight.

The move 9.Nc3 is considered best by theory, but the great Tal had a preference for 9.c4, playing it on more than a couple of occasions.  Curiously, however, he never won with it!

In my database there is one game where White retreated his Queen to h5.  Adams’ move keeps an eye on the f4 to c7 diagonal.  Now I would think that this is an excellent time for Howell to play it safe (here, or on the next move) by playing …d6, allowing the other Bishop to develop.  However, Howell seemed to be attracted (fatally so, it appears) to the idea of playing his Knight to d3.

Blissfully ignoring what Black is up to and rapidly completing his development.  White need only play Rad1 to have fully mobilized his troops.  This is Howell’s last chance to get a normal-looking game with …d6.

This looks like a strong move, but Howell had apparently underestimated Adams’ next move.  I am reminded of a comment by the great Capablanca where he remarked that had a certain move by his opponent been strong , then he would have never let him play it!  Certainly Howell should have suspected that something was amiss here…
15. Re3!

I was searching for some games recently to show my 12 year old nephew (Miguel) the value of doubling on an open file, and I have to thank both Adams and Howell providing me with such an instructive example!
Essentially, Black is lost not so much because of his lack of development as much as the tactics connected with White’s threat of simply plopping a Rook on the 7th all  work marvelously.

There is really nothing better!  Black hopes to exchange Queens with …Qf4 perhaps, but as Howell admitted later, he had already mentally accepted defeat and was simply trying to avoid going down in flames.

White is attacking with (count them!) 5 pieces.  In general, unless the defender has atleast 3 pieces around his King such an attack is simply overwhelming and it is not a surprise that some sacrifices are now looming over the Black monarch.
19… Ba6

Now the Bishop develops, but to the edge of the board and without providing any relief to the defence.
20. Nxh7!

Now White has 3 pieces to attack the King with and it is becoming evident that Black might have to give his Queen to avoid the worse….
22. Ng5 Kg8 23. Qh4!

This effectively ends the game.  I congratulate Howell, however, on not resigning and instead manly playing on to mate for the spectators’ delight and benefit!  Too often one resigns before allowing the opponent to chop off his head and put it in a basket infront of a blood thirsty crowd.
23… Bxc4 24. Qh7 Kf8