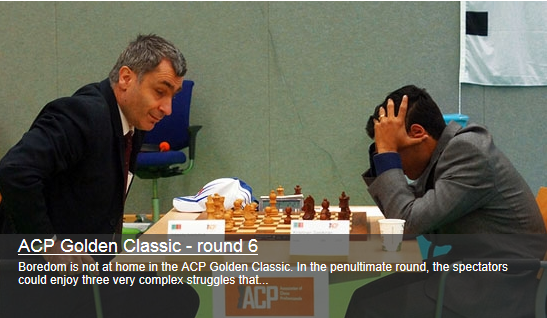 Here White stands a bit better than usual in these slow moving ”d3”-spanishes; his Bishop is  actively posted on b3 and he has Qf3 coming in, with creeping pressure.  Black should dig-in with 18…Bc6 and after 19.Qf3 Rab8.  It would be a tough fight ahead for both players.
INSTEAD, Sasikiran decided to play poker and mix things up…probably reasoning that it would not make much difference to the outcome….even so, there is a miscalculation in his cards and he immediately finds himself in hot water:

Black does not have nearly enough compensation for the exchange, but there are not insignificant technical problems to be overcome by White  still.  Sasikiran hopes to make a fight of it by playing f4 and advancing his King to e6.  Who knows, should Ivanchuk play passively he might even get back into the game and  start advancing this centre pawns!
White has a number of ways to proceed, the most obvious being to play 29.f4! and if 29…e4  30.Bf2 and 31.g4! opening up the g-file.  It would be difficult to imagine Black holding out in the long run…
BUT, Ivanchuk found another solution to the technical problems in the position and decided to play into an ending where he would have  2 Rooks and 2 extra pawns versus Rook, Bishop and Knight:
29. Bxe5!?  PxB  30.Rxe5

Here White has 2 wonderful Rooks that completely dominate the centre files.  Notice that neither of Black’s minor pieces has a good outpost to hang on to.  On top of this, once White gets his Q-side pawns going Black will most likely have to give up a piece just to prevent them from advancing too far…Ivanchuk won without too much apparent difficulty.  Students of the endgame will find it worthy to study Ivanchuk’s handling of the position.

The Ivanchuk vs Saskiran game can be played over below: