It is estimated that one fifth of all Canadians are of Irish heritage!

St. Patrick’s Day is celebrated on March 17, his religious feast day and the anniversary of his death in the fifth century.
The Irish have observed this day as a religious holiday for over a thousand years. On St. Patrick’s Day, which falls during the Christian season of Lent, Irish families would traditionally attend church in the morning and celebrate in the afternoon. Lenten prohibitions against the consumption of meat were waived and people would dance, drink, and feast—on the traditional meal of Irish bacon and cabbage.
The first St. Patrick’s Day parade took place not in Ireland, but in the United States. Irish soldiers serving in the English military marched through New York City on March 17, 1762. Along with their music, the parade helped the soldiers to reconnect with their Irish roots, as well as fellow Irishmen serving in the English army.

Over the next thirty-five years, Irish patriotism among American immigrants flourished, prompting the rise of so-called “Irish Aid” societies, like the Friendly Sons of Saint Patrick and the Hibernian Society. Each group would hold annual parades featuring bagpipes (which actually first became popular in the Scottish and British armies) and drums.

In 1848, several New York Irish aid societies decided to unite their parades to form one New York City St. Patrick’s Day Parade. Today, that parade is the world ‘s oldest civilian parade and the largest in the United States, with over 150,000 participants.

In Canada:
St Patrick’s Day is a public holiday in the Canadian province of Newfoundland and Labrador on the nearest Monday to March 17 each year. In some cities, notably Toronto and Montreal, large scale St Patrick’s Day parades are held, often on the Sunday closest to March 17. The parade in Montreal has been held every year since 1824. . In some places there are Irish cultural events. For instance, the Irish Association of Manitoba organizes a three-day festival of Irish culture in the week of St Patrick’s Day.
Who was St.Patrick?

St. Patrick, the patron saint of Ireland, is one of Christianity’s most widely known figures. But for all his celebrity, his life remains somewhat of a mystery. Many of the stories traditionally associated with St. Patrick, including the famous account of his banishing all the snakes from Ireland, are false, the products of hundreds of years of exaggerated storytelling.

It is known that St. Patrick was born in Britain to wealthy parents near the end of the fourth century. He is believed to have died on March 17, around 460 A.D. Although his father was a Christian deacon, it has been suggested that he probably took on the role because of tax incentives and there is no evidence that Patrick came from a particularly religious family.

At the age of sixteen, Patrick was taken prisoner by a group of Irish raiders who were attacking his family’s estate. They transported him to Ireland where he spent six years in captivity. (There is some dispute over where this captivity took place. Although many believe he was taken to live in Mount Slemish in County Antrim, it is more likely that he was held in County Mayo near Killala.) During this time, he worked as a shepherd, outdoors and away from people. Lonely and afraid, he turned to his religion for solace, becoming a devout Christian. (It is also believed that Patrick first began to dream of converting the Irish people to Christianity during his captivity.)


After more than six years as a prisoner, Patrick escaped. According to his writing, a voice-which he believed to be God’s-spoke to him in a dream, telling him it was time to leave Ireland. To do so, Patrick walked nearly 200 miles from County Mayo, where it is believed he was held, to the Irish coast. After escaping to Britain, Patrick reported that he experienced a second revelation-an angel in a dream tells him to return to Ireland as a missionary. 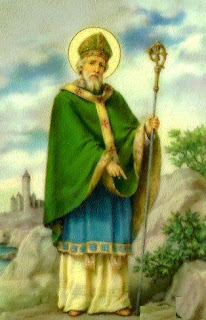 Soon after, Patrick began religious training, a course of study that lasted more than fifteen years. After his ordination as a priest, he was sent to Ireland with a dual mission-to minister to Christians already living in Ireland and to begin to convert the Irish. (Interestingly, this mission contradicts the widely held notion that Patrick introduced Christianity to Ireland.)

Familiar with the Irish language and culture, Patrick chose to incorporate traditional ritual into his lessons of Christianity instead of attempting to eradicate native Irish beliefs.

The shamrock, which was also called the “seamroy” by the Celts, was a sacred plant in ancient Ireland because it symbolized the rebirth of spring. By the seventeenth century, the shamrock had become a symbol of emerging Irish nationalism. As the English began to seize Irish land and make laws against the use of the Irish language and the practice of Catholicism, many Irish began to wear the shamrock as a symbol of their pride in their heritage and their displeasure with English rule.

St.Patrick also used bonfires to celebrate Easter since the Irish were used to honoring their gods with fire. He also superimposed a sun, a powerful Irish symbol, onto the Christian cross to create what is now called a Celtic cross, so that veneration of the symbol would seem more natural to the Irish. (Although there were a small number of Christians on the island when Patrick arrived, most Irish practiced a nature-based pagan religion. The Irish culture centered around a rich tradition of oral legend and myth. When this is considered, it is no surprise that the story of Patrick’s life became exaggerated over the centuries-spinning exciting tales to remember history has always been a part of the Irish way of life.)

But the Biggest Celebration is in the U.S.!

Irish Soda Bread gets its name and distinctive character from the use of baking soda instead of yeast as the leavening agent. Lime-green chrysanthemums are often requested for St. Patrick’s Day parades and celebrations.

There are 36.5 million U.S. residents who claim Irish ancestry. This number is almost nine times the population of Ireland itself (more than 4 million). Irish is the nation’s second most frequently reported ancestry, trailing only those of German ancestry.
The U.S. as a whole claims 12% of residents as having Irish ancestry. In Massachusetts this number doubles to 24 percent!
In Middlesex County, Mass., 348,978 residents are of Irish ancestry. Among the 54 counties where Irish is the largest observed ancestry group, Middlesex had the highest population of Irish-Americans, with Norfolk County, Mass., second, with 203,285.

There are three states in which Irish is the leading ancestry group: Delaware, Massachusetts and New Hampshire. Irish is among the top five ancestries in every state but two (Hawaii and New Mexico).

There are 54 counties where Irish is the largest observed ancestry group. Forty-four of these counties are in the Northeast, with 14 in New York, 11 in Massachusetts and five in New Jersey.
A total of 4.8 million immigrants from Ireland have been admitted to the U.S. for lawful permanent residence since fiscal year 1820, the earliest year for which official immigration records exist.
By fiscal year 1870, about half of these immigrants were admitted for lawful permanent residence. Only Germany, Italy, the United Kingdom and Mexico have had more immigrants admitted for permanent residence to the United States than Ireland.