And then there was only one… 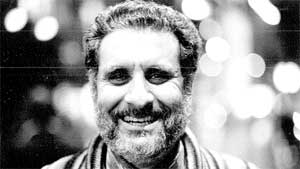 Recently I was having a conversation with a friend of mine (Philip Adams) about the REMARKABLE  coincidence of NYC producing so many world class players within just one generation of each other.  The reader will no doubt realize that I am talking of Larry M Evans (born Manhatten, 1932), William Lombardy (born Bronx, 1937) and Bobby Fischer (born Brooklynn, 1943).

All three possessed extraordinary talent for the game and achieved truly world class results before the age of 20. In particular, Lombardy won the World Junior Championship in 1957. Fischer won the World Title in 1972. (Please see  blog entries from February 2009 for indepth details)
The trio would go on and transform American chess forever, each with his own distinct contribution.  Curiously, all 3 would play in the 1956 Canadian Open held in Montreal (Evans and Lombardy tied for first place).
”I met him (Fischer-editor)  when he was 13 in Montreal after I tied for first in the 1956 Canadian Open. I think he was the youngest player in the field, and he finished in a logjam at 8th – 12th.
Bobby asked me and my wife if we would drive him back to New York. Along the way he peppered me with one question after another about various openings that we discussed without sight of the board…
It was clear that he was obsessed with chess, but I had no inkling of how far he would go because most prodigies fizzle out. Dr. Tarrasch said that it is not enough to be a strong player; you must also play strong moves. Bobby had not yet made those moves. Still, I remember him saying, “I think my subconscious mind is working on chess all the time – even when I’m not playing or studying.“
( http://www.chessville.com/Editorials/Interviews/GMLarryEvansInterviewOnBobbyFischer.htm ) 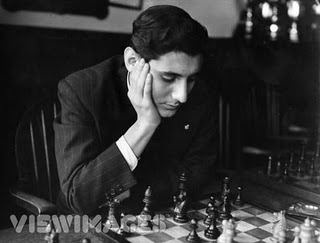 29th December 1949: The 17 year old chess champion, Larry Evans (1932 -), studies the board during a match at Hastings. (Photo by Hulton Archive/Getty Images)
Evans learned chess young and already by age 15 was making a name for himself at the Marshall Chess Club by becoming the youngest club champion up to that time. One success followed another..  he  tied for first in the 1949 US Junior (with Bisguier); NY state champion by age 18  and Evans was invited to participate on the US national team at the 1950 Dubrovnik Olympiad where he won a medal for his 90% score (!) on last board.

In 1951, at age 19, Larry Evans won the US Championship ahead of Reshevsky.  Even more impressive, he won his second title the next year (1952) by winning a match with H.Steiner.
Evans would win a total of 5 US Championship cups, the last being in 1980 (sharing a 3-way tie with Browne and Christiansen). He participated in 15 US Championships in total.
Evans was awarded the IM title in 1951 and the GM title in 1957.  He also won every major US title , including 4-times the US Open.  Evans also participated (or captained) 9 Olympiad teams, winning numerous medals and awards.

A bit of history: Edward Lasker, Larry Evans (centre) and H.Steiner immediately after signing the contract stipulating the match terms in 1952 for the US Championship title.
On the international scene, however, Evans rarely shone like Lombardy or Fischer, though he did once come ahead of Bobby at Buenos Aires in 1960.  It appears that travelling had a negative effect on his performances.  Evans never believed in psychology, just good moves (like Bobby).  So he did not see the need for having a trainer or for physical and mental preparation (unlike Bobby).

Never the less, his match victory over the Soviet star Mark Taimanov in 1954 stands as one of Americain Chess’ greatest achievements up to that time:
POSITION AFTER WHITE’S 19th MOVE (19.Rxc7)
EVANS

TAIMANOV
Taimanov no doubt underestimated the young American when playing his last ‘brilliant’ move.  Little did he realize that he had fallen into a trap!  Evans played the clever 19…Nf5!! and went on to win a beautiful game.

Evans decided in the mid-1950’s to make a serious effort to become a professional player (unlike Reshevsky, who worked as an accountant), but several factors worked against him.  First, he could get no sponsorship and had to increasingly rely on his journalistic skills  to make ends meet.  Secondly, his international results did not confirm his status as a world beater. And finally, the emergence of Bobby Fischer towards the late 1950’s relegated every American hopeful into an ”also ran”…
As with the case of William Lombardy, it must have been very discouraging for an enormously talented and ambitious youth like Evans to have to play in the shadow of a Mozart.  Fischer was the greatest chess genius since Paul Morphy and his results were so unbelieveably outstanding that even the Soviets started to fear him! At the US Championships in 1964 , Evans came in clear second–but Fischer won first place with a fabulous 11-0 score!  (Dr. Kmoch is reputed to have congratulated Evans on ”winning the tournament” and congratulated Fischer on ”winning the exhibition”)
Evans ,stubbornly perhaps, continued to play competitive chess, but it was clear that he did not ‘believe’ in himself, and he became increasingly known more as a writer and journalist.  At any rate, Evans would remain a force in US chess for decades to come…

The relationship between Larry Evans and Bobby Fischer was a very productive one (for both) and lasted until right before the 1972 Fischer vs Spassky match, when there was a falling out between the two.  It was for this reason that only Lombardy went to Reykjavik to assist Bobby.

Fischer recognized Evans’ skill as both a player and writer and there was a longtime collaboration between them on many projects.  Evans edited Fischer’s ”My 60 Memorable Games” and Fischer proof-read Evans’ classic   ” Modern Chess Brilliancies” 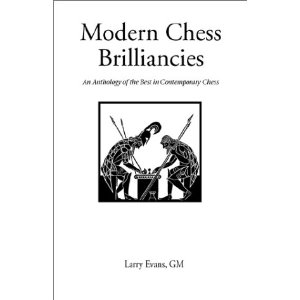 Evans was a keen opening theoretician and kept up to date with what the Soviets were doing.  In particular, Evans’ exhaustive research skills provided Fischer with the most complete information available at the time.
In later years, however, Evans would display the occasional sign of bitterness when Fischer’s name came up:
”A penniless, uncultured high school dropout from Brooklyn suddenly got a taste of power, and it went to his head. I never asked to be paid and basically donated my services, and he then imposed conditions that were unacceptable.”  -Evans at the above link

CHESS JOURNALISM,  CHESS BOOKS AND MORE BOOKS
While I never met Larry Evans, there is no doubt that his writings had an enormous influence on my own chess development.  Author of some 50 bestsellers and a  regular contributer to a chess column at Chess Life and Review  (and the earlier Chess Review) for some 50 years, Evans was able to combine his enormous chess understanding with the rare journalistic flair for making chess interesting , fun and relevant.
I remember while still in high school (Rosemount High School in Montreal)  eagerly awaiting the monthly arrival of Chess Life and Review so as to be able to read Evans’ question and answer column!  No question was too stupid to be considered and every answer was instructive.
Evans, curiously, seemed destined to become a great and prolific author and journalist right from the very beginning.  He published his first book when just 18 years old (a book of Bronstein’s best games)  and never looked back!  He created the American Chess Quarterly in the 1960’s and was editor of Chess Digest for a while. His syndicated chess column (Evans on Chess) was read by millions.
I have a number of Evans books in my library here in Portugal, and I still read them from time to time: 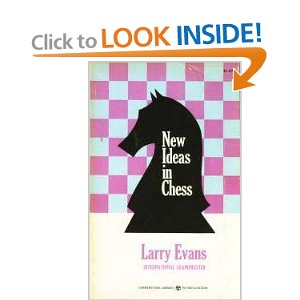 First published in 1958, this classic explains the basic elements of chess (time, space, material) and how they work together dynamically.  I read this book for the first time in 1969.  Even today you will be hard pressed to find a book with more bang for the buck! 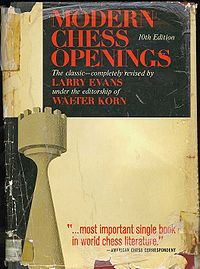 Perhaps the most ‘read’ book in my library!  The 10th edition of MCO is rightly called the ‘bible’.  Written in 1965 (with Korn), this book would become the most important theoretical text on the openings for the next 10 years and would set the standard for all future enciclopedic chess books.
Even today I regularly consult this legend: the footnotes contain a wealth of material that has escaped the modern databases.  The introductions to each opening are both concise and  complete.  I can not say too much about what a great book this is!
Before leaving this topic, it should be understood, however, that any writer who is as prolific and widely read as Evans is (was) would be found wanting in some area with respect to detail and bias.  Not wanting to get involved in dispute, I recommend the readers consult Winter’s great site (http://www.chesshistory.com/) to get his perspective on some of Evans’ work:  http://www.chesshistory.com/winter/extra/evans.html
______________________________________________________________
PERSPECTIVE

Evans analyzing the famous Reshevsky vs Fischer game from Mallorca 1970.
Larry M. Evans was a legend in every sense of the word.  A truly great American.  His long career in chess broached every topic imaginable : player, writer, politician and historian.  His career spanned more than 60 years.  He , along with Lombardy and Fischer, established New York as the cradle of American chess.
Evans saw the chess world develop and unfold –in greatness and in tragedy–and he never backed down from calling a spade a spade.  While he made many bitter enemies along the way, Evans’ place in history is established ,undeniable and proud.  Countless generations of players are grateful to him for his efforts.
SPRAGGET ON CHESS
Share