Gelfand to challenge Anand in 2012 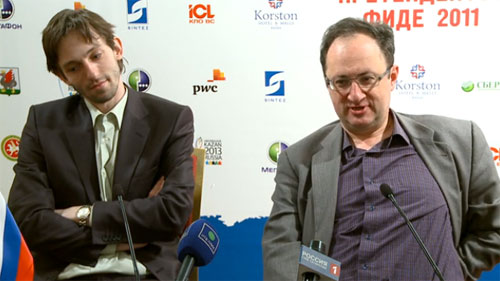 So the Kazan Candidates came to a dramatic close this afternoon after almost 3 weeks of intense chess.  The oldest participant of the event, 43 year old Boris Gelfand, now calling Israel his home, has emerged victorious after his 6th round game against 27-year old Alexander Grischuk.  Gelfand earns the right to play Anand next year for the title of World Champion.  Congrats and best of luck!
POSITION AFTER 18 MOVES:

GM  GELFAND
Black is attacking towards the White King.  His last move (18…Bf6) threatens to win a pawn.
Gelfand simply ignored it and made the stunning
19.f4!
which Grischuk had not even considered.
”I had to find this manoeuvre with Ra5-h5 to find counter play, but then Boris found an amazing concept with 19.f4, just giving up the pawn. It didn’t even cross my mind, this idea. Then I thought, like, I have an extra pawn, a better pawn structure, the white squares are weak but then I realized I was just completely lost.”
–Grischuk at the press conference.