There is little consolation in reciting ‘‘To err is human”  after one has  played a real lemon, but atleast we would be in good company!  What great player has not had his embarrassing moments?  The following position arose in the 19th Soviet Championship of 1951 and serves as an excellent example of this theme.
BLACK TO PLAY HIS 30th MOVE
Geller

Smyslov
Geller has a clear advantage and his Knight must be a hundred times better than Smyslov’s Bishop. On top of this, his pawns are more compact.  But Black should not be in a rush and instead should have aimed his paly at reaching adjournment and then letting his seconds go to work and find the fastest path to victory.
Here 30…Qf7 is indicated.  INSTEAD,  Geller  played the most ‘logical’ move….
30…Ra2 ?? 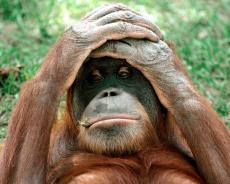 ”It is in our faults and failings, not in our virtues, that we touch each other, and find sympathy. It is in our follies that we are one.”