Friday!  A not so well known fact is that ”friday” is translated into most languages as ”let’s go out tonite and party”.  Or something like that…Bosses don’t like Fridays because their workers are not so productive and usually work only half a day.  Also not so  well known is that resolutions taken on a Friday are usually retracted by Monday….so today is just a good day to lay back and wait until Monday before doing anything serious!

Happy Thanks Giving to my American readers!

Be very careful!  Black is up to no good here….

Serbian grandmaster Ivan Ivanisevic celebrates his birthday today (Link).  A very talented player and tough competitor, Ivan is perhaps the Serbian with the most consistent results.  I think that he is just now entering his prime!

Link
The Kostic Memorial is beginning to warm up!  Yesterday saw everygame a decisive result, and some very interesting chess to boot!  I recommend my readers to take a look at the tournament site lots of photos and history.
I especially like yesterday’s game between Kiril Georgiev and Bogosavljevic:
NICE  POSITIONAL  MASSAGE!

It is so typical of modern grandmaster chess to give up a pawn in return for the Bishop pair, often even heading into the ending.  Long term compensation!  I think it was Alekhine who first made use in his games of this technical procedure.
Here we have one such example.  White has little to brag about in terms of concrete assets, but Georgiev knows perfectly well that as the game progresses the Bishop pair can become a force to reckon with.  Black’s last move (15…Qb6) tries to contain the threats that the White Queen poses, offering an exchange of Queens.
Georgiev played the calm and cool…
16.b4!? e6 17.Be3!
…forcing Black into the ending!  He won a very instructive game, worthy of close study by my readers.


MEANWHILE, THE BATTLE OF THE SUGARS CONTINUES….

The first game of the semi-final match at the World Cup between Indian superstar Harika and ex-world champion Stefanova was an exciting game!  Harika came prepared , with fruit juice, but to no avail.

No doubt the Indian star had assessed this positon a bit too optimistically, thinking that with the e-pawn in the air and the White Bishop stuck on h7, Black must have something good in the position….
23.Kf2!

After her harrowing match with Sebag, Stefanova’s tactics are sharp and she does not miss a beat!
Now White is clearly better.  Black must either retreat in disgrace or push forward.  Harika decides to be brave:
25… Nxf3!? 26. gxf3 Qh2 27. Ke3!

Once more the best move!
Retreating to e1 would have allowed …Bh3 with strong counterplay.  Now 27…Bh3 would allow 28.Bg6! neutralizing all the threats. Black tries something else…

Top rated   Alexander Morozevich  is something of an anti-hero in the world of chess, and perhaps this explains his enormous popularity among the chess public.  Morozevich does not try to be a star or the centre of attention.  He limits himself to play his own game of chess and let’s the fans decide what they want.  He is neither a showman nor a politician.
Today Alexander won his second game in a row, this time against the Italian superstar Fabiano Caruana.  Once more, a very unspectacular game–but very instructive!  The opening played no role what so ever, and Morozevich tried to outplay his adversary in a balanced Rook and pawn ending…

I certainly mean no disrespect to Morozevich when I write that his chess so far is unspectacular: Bobby Fischer and Anatoly Karpov were also at their most dangerous in balanced positions.  Some of their best results have come from grinding down their opponents….
POSITION AFTER WHITE’S 11th move (11.Castles long)
gm  CARUANA

gm  MOROZEVICH
The Berlin Defence against the Spanish is more and more being met by the modest 4.d3  White gets nothing in the opening and the battle is pragmatically deferred to the middlegame.
Here Morozevich gives Caruana the option of castling short and then fighting it out in a complex pawn storm on both sides (typical of opposite-side castling), or of playing it safe and castling on the same side.  The Italian star probably did not want to risk much so early in the tournament,and so he castled long also.
Soon the position reached an impasse:

This is the position after 18 moves.  Neither side can undertake anything active and the position is about even.  The doubled pawns on c5 and c7 are not a factor of any relevance, atleast not yet.  I would assume that most gms would agree to a draw here, but Morozevich is a great fighter and he no doubt realizes that having an even position is not the same as having a drawn position…characteristic of the great masters of the past is that some of their best games have arisen from slow-moving and even boring opening play.
Also very important when you want to play in this style is to avoid making mistakes: the longer one plays the better the chances that your opponent will start to get tired (bored?!) and begin to play imprecisely.
THE GAME PROCEEDED NORMALLY AND SOON THIS POSITION AROSE:

Position after 23 moves.   The Queens and Knights were exchanged.  The Rook and Pawn ending is more comfortable to play for White (Black is a bit passive) but Black has everything undercontrol. White can only tease Black….
Then, curiously, Caruana began to make several second-best moves and soon he found himself a pawn down, though still with a sound position:

Morozevich has exploited Caruana’s imprecisions, but still it is not enough to generate any real winning chances.  Black’s passed c-pawn is strong counterplay, while White can not create passed pawns on the Kingside: Black’s Rook is very well posted.
All the more surprising, then, that Caruana would now not play the correct 40…Rf4!, keeping the White Kingside pawns under control.  The game should end in a draw with accurate play.
INSTEAD,  Caruana took the pawn on a3, a decisive mistake as after 41.f6!  White was able to get connected passed pawns and win the ending in less than a dozen moves. 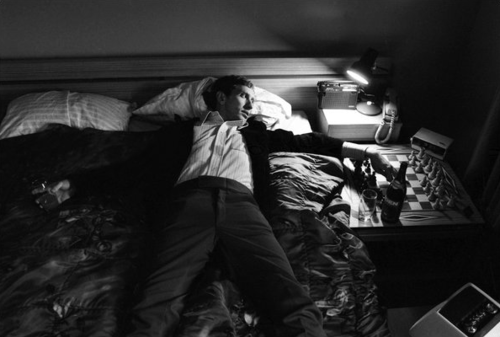 ”My God, he plays so simply!”
Alexei Suetin (speaking of Bobby Fischer)
Share