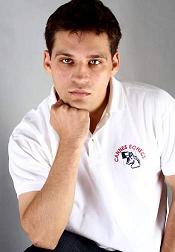 French champion Vladislav Tkachiev (born Moscow, 1973) is an extraordinarily talented chess player: twice champion of France ( he holds French nationality), 2007 European Champion and winner of countless international tournaments. Tkachiev is also a very popular person and well liked by his colleagues and chess fans.
But Tkachiev has a serious drinking problem that has recently attracted a lot of public attention. The night before the final round of the 2008 Dresden Olympiad Vlad did a bit too much partying and was not able to appear for the final round the next morning, ruining the medal chances for the French team… something that the French Chess Federation (FFE) did not appreciate very much. 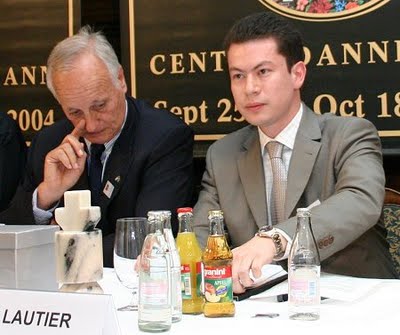 
In an effort to repair the damage done in Dresden, Tkachiev publically apologized for his behaviour: http://www.youtube.com/watch?v=G-99d52sW5Y Towards the end of the above video Tkachiev asked that he be given a second chance.

Fast forward to August 21 of this year, Joel Lautier, in his new role as National Selector, gave a press conference where he announced the composition of the French Team for the European Team Championship (which is taking place right now!) to be held in Novi Sad. 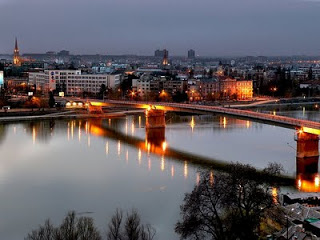 Joel had chosen a youthful team that did not include Tkachiev: Romain Edouard (2620), Matthieu Cornette (2577) and Sébastien Feller (2570) joining veterans Etienne Bacrot (2709) and Laurent Fressinet (2658). 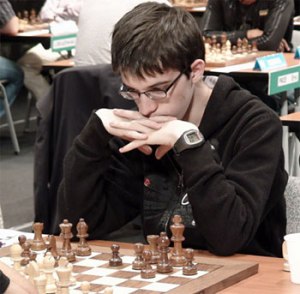 (Note: Wunderkind Maxime Vachier-Lagrave chose to play in the World Junior Championship, which takes place at the same time in Argentina)

Joel Lautier did not explain why Tkachiev was not chosen for the team, nor even if he was considered. (The National Selector is only required to justify why he chose the players actually selected, not the players not chosen!)
I suppose it was inevitable that all sorts of conspiracy theories would appear on french chat sites and message boards; personal rivalry between Lautier and Tkachiev, punishment, one more example of the ‘zero tolerance’ attitude that is sweeping chess…Adding fuel to the fire, the very next day (August 22) Vlad Tkachiev became Champion of France, winning one of the strongest (if not the strongest) French Championships ever.
Just when it seemed that popular opinion might swing in his favour, Tkachiev went ahead and shot himself in the foot at a prestigious international tournament in Kolkata India:
http://russiatoday.com/Top_News/2009-09-04/tkachev-too-drunk-checkmate.html

A French chess grandmaster was unable to finish his game against his Indian opponent because he dozed out after 11 moves. The embarrassing incident has been attributed to excessive alcohol consumption.
Russian-born Vladislav Tkachev, 2007 European Classical chess and Blitz chess champion, was facing Praveen Kumar at an international tournament in the Indian city of Kolkata.
However, about 10 to 15 minutes after the game started, the French player began showing signs of inebriation, an eyewitness told RIA Novosti news agency. Then he fell asleep with his head on the chess board.
After attempts by both Kumar and the organizers to wake Tkachev proved futile and he couldn’t make his moves within an hour and a half as the regulations required, the game was awarded to the Indian player, reports Hindustan Times newspaper.
Organizers reprimanded the French player afterwards, but he was allowed to take part in the rest of the tournament.

This story went around the world and appeared in thousands of newspapers and tens of thousands of websites. There even appeared a comical video on youtube about the game that Tkachiev lost: http://www.youtube.com/watch?v=KLCuqvgfqc8

Whether this mess was good for chess (which hardly ever makes the papers) is an interesting question, but as soon became clear, Tkachiev’s supporters realized that they were fighting a lost cause…the French Team went to Novi Sad without Vlad.

Chess in France is a success story, but not one which occured overnight. Twenty five years ago there were no French grandmasters, though some strong GMs had started to make France their home (such as Spassky, Dorfman, and Vaiser).

What France had plenty of back then, however, and this made a huge contribution to the development and the promotion of chess since then, is excellent organizers! These organizers have been able to find sponsors to organize world class tournaments (Montpellier and Belfort as just two examples) , create long standing tournament traditions (such as Cappelle la Grande, Cannes, Metz–all of them running 20 years or more ), bring home a World Championship title match (1990), etc.

The French Team Championship is one of the flagships of French chess: perhaps the strongest national team championship in the world (many think so!), it includes all the clubs and thousands of players.
Soon France started to produce superstar level players. Joel Lautier became World Junior Champion in 1988, and he was an excellent role model for the generation that came later. Then E.Bacrot became one of the youngest grandmasters in history in the late 1990’s.

Today France is the 7th highest ranked country in the chess world, with 38 grandmasters, 83 IMs and a total of 305 titled players. There are two players rated more than 2700 (E.Bacrot and M. Vachier-Lagrave) and a half dozen strong 2600-plus players and dozens of 2500-plus players.

With the FFE boasting more than 50,000 members, I think it is fair to say that representing France internationally carries with it a heavy burden of responsibility. It appears that Joel Lautier is not willing to put any single player–no matter how talented and charismatic–above the National Team.

I think he is right! I fully agree with Joel Lautier’s selection for the National Team. It sends a strong signal to everyone that is hard to ignore. In a country like France, with so many young talents coming up in the next few years, where there is no real shortage of stars capable of earning a position on the National Team, winning is becoming serious business! Any anyone who allows selfishness to get in the way of that objective should not be allowed to do so on the National Team…

It all starts from social drinking: you go out with some friends after work just to relax or unwind. It is all very harmless. In the US it is estimated that 90% of all adults consume alcohol. Except if one does it day after day…soon one can become addicted to alcohol.

In the chess world , unfortunately, most players drink and , for the majority of those who do, they drink too much for their own good. But the reason players drink has very little to do with social drinking: it is more about handling stress.

It can be argued that competitive chess is more stressful than many other similar activities and sports. If only by reason of the innate nature and design of the game itself: the inordinate amount of time it takes to complete a game; the constant worry about the clock; the doubts and uncertainties of our plans, ideas, and moves; the difficulty in predicting the outcome of the game; the never ending barrage of threats from our opponent (whether real or imagined ); the psychological implications and consequences of competition; how much our self-esteem is on the line; the spectators… All these can give life to strong fears and numerous anxieties.
Contrary to what happens in most sports, chess has no obvious outlet for releasing the build up of stresses and pressures that accumulate during the course of the game. In tennis, for example, the player can release (externalize) this buildup in the form of a controlled physical ‘explosion’ or outburst: he can hit the ball as hard as he wants or run back and forth as much as he likes. His level of arousal can thus be decreased.

He can therefore control stress more easily than a competitive chess player—who is essentially confined to sitting for the duration of the game–because he has a mechanism that serves as an escape valve for excess stress and pressure. In chess it is the internalization and the resulting accumulation of stress that sets it apart from other sports. This creates unique problems for the competitive chess player.
So what usually happens after a tough game is that a group of players will go to the bar and need to have a drink or two…

Perhaps the most well known episodes of drunkeness are associated with the great Alexander Alekhine. (dead at 53)

Alexander Alekhine was a fully functional alcoholic almost all of his adult life. He was so incredibly gifted and ahead of most of his rivals that he could afford to be drunk and still perform at a very high level.
http://www.chesscafe.com/text/kmoch05.pdf

Once in a simul in New York (soon after he had won the World Championship Title) against the city’s finest and wealthiest , Alekhine showed up dead drunk. Fortunately for the organizer, the champ could still walk! And so the simul proceeded. Story has it that at one point Alekhine needed to relieve himself, and so in front of everyone–and to their general horror– he unzipped his fly and did what came naturally! The simul then continued…though I don’t think too many handshakes were sought!
Many experts believe that Alekhine lost his world title in 1935 to underdog Max Euwe precisely because of drink. He began the match very successfully and then started to drink excessively, undoubtedly over confident…in the end he lost! Two years later he played a rematch: this time he abstained from drinking and won back his world title.

The great Latvian wizard, Misha Tal, (dead at 55) was another of the World Champions who had difficulty controlling his drinking. While I have never seen Tal drunk (once in my hotel room in Montpellier at the 1985 Candidates Tornament I had a little party with Tal, Spassky and others, with alcohol present, but everyone was perfectly (?) behaved!) there are many stories!


According to Canadian master and author Paul Janicki, during the 1973/74 Wijk Ann Zee tournament Tal showed up drunk several times for his games and had to carried off, with the game being played at a later point. (Tal won the tournament brilliantly!)

Closer to home, Igor Ivanov (dead at 58) arrived in Canada (1980) already an alcoholic, and often played in that state. It did not seem to affect the quality of his play, to every one’s amazement! Igor was an incredibly gifted individual and his strong build allowed him to get away with some pretty horrible drinking sprees.

His reputation often suffered, however, as sometimes visitors to the popular Montreal chess club (En Passant) would be able to see the Canadian champion sleeping underneath the chess table! I remember having to play Igor in one tournament during the winter of 82/83, and he was constantly running off to find his bottle of vodka that he had chilled in a mound of snow outside the fire-escape…