IT TAKES 2 TO TANGLE
Today’s game comes from the French Team Championship which is taking place right now.  Infact, this game was played today!  The adversaries are the Ukraine GM Moiseenko and the French IM Battaglini.  Both players have styles that lead to complex and difficult to evaluate positions where the stronger player usually comes out on top. 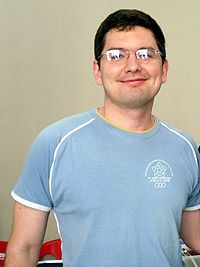 Alexander Moiseenko is one of the Ukraine’s leading players.
How does one create winning chances when the opponents are within a class  of each other?  Indeed, how does one go about trying to win if the opponent refuses to make mistakes?
The recent disappointment in the fighting qualities exhibited in the recently concluded Kazen Candidates Tournament (matches) has provoked much debate on the state of chess at the top: everybody plays very safely with the Black pieces and ‘just’ safely with the White pieces!
Moiseenko’s answer to this dilemma is to take some risks (they don’t even have to be very big) and to force the opponent out of his usual habitat.  By forcing the opponent to think for himself (instead of simply playing by memory), winning opportunities appear by themselves.
It is very difficult to play accurately in chess.  To be able to play 10 best moves in a row is a quality that only a handful of top players are capable of…

POSITION AFTER 13 MOVES
An opening that is not so often seen in master chess.  Usually White plays 14.Bb5 (neutralizing the pressure on White’s d4-Pawn) with mixed results in practice.  Moiseenko prepared a little surprise for Black….

Not much of an innovation, but atleast it gets Black thinking.  Now it is dangerous to immediately take on d4 (14…Nxd4?!  15.Nb3!  NxN 16.Bb5-ch! with a strong attack) but Black could now simply play it safe and  castle;  after 15.Nf3  Rd8 16.Qd3 h6 it is an interesting game where White is freer but Black is solid.
However, chessplayers have the right to make second-best moves, and here Black provokes White by grabbing a pawn at the expense of losing his castling rights.  Did Black overestimate his defensive resources, or underestimate the initiative that White now gets?  Only Battaglini can say….
14…Qc3?!

With good attacking chances for the Pawn.  Black must defend against White’s immediate threats, and while he can do so, it is the long term problems connected with  a lack of coordinated pieces that causes Black so much trouble.
LATER, THE POSITION AFTER BLACK’S 20th MOVE:
White must be careful not to fall for 21.Re4?!  since Black can escape his problems with 21…Qxe4!, which gets 2-Rooks for the Queen and slows down White’s attacking chances considerably.:

However, there is no need for rushing things!  White has a harmonious development at the cost of his pawn and Black is still undeveloped on the Queenside, White is  now able to paralyze Black even more with simple moves.  Any top-notch GM should be able to win the above position: it is just too difficult to defend !

Returning to the topic of Kazen and too many draws in chess, I am of the opinion that computers are not responsible for the lack of ambition demonstrated by the elite players in the world whenever they play in important qualifying tournaments.  Why blame a machine when you can blame its master?
Databases have changed the way that the typical tournament is fought in the sense that now information is not ONLY the private property of the strongest and most dedicated professionals…today the battle field is more balanced and getting the upperhand in the opening is difficult against a prepared adversary.  However, this change is a natural change that most players welcome.
What is really different today from say 20 years ago–even remarkably so– is that in the heat of the battle many top GMs don’t want to take risks…without first checking out the tactics with their chess engines!  Gone seems to be the pioneer spirit of the debate of new ideas….
But, ok, the life of a even a top GM is not a bed of roses: why should he be willing to fall on his sword just to satisfy the more carnal pleasures of the fans?
I am not sure what the solution is, but there is no doubt in my mind that it would not take too much to change the present situation: if another Fischer were to come along then people could become inspired by what the human spirit is capable of if you really want to do something special.

Until that happens (and I hope it does, soon!) , I suppose the chess world will simply be inhabited by copiers, and naturally become a more sterile place where ideas take second place to safety and creativity is considered an unnecessary evil.