SUSPENSIONS UP TO 3 YEARS!

French star grandmaster Sebastien Feller has been suspended from playing in FIDE events for slightly less than 3 years, effective immediately.  He will be joined by partners in crime  grandmaster/trainer Arnaud Hauchard and international master Cyrol Marzolo.
The case dates back to the French National Team that participated in the 2010 Olympiad, where the three were thought to have executed a well thought out hoax , fooling experienced arbiters and grandmaster players, to make use of electronic devices during the games of Feller.  The case received international attention.
You can find the full pdf decision by the FIDE ethics committee here. 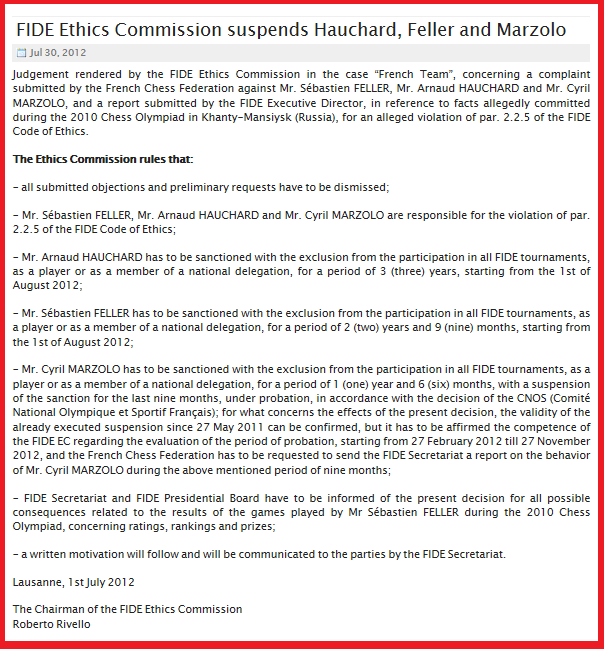 link
The FIDE decision puts the 3 French men in a difficult position as contesting such a suspension will not just be expensive, but likely to be futile given the extensive evidence that the FFE (French Chess Federation) has amassed.  Feller and his 2 friends had successfully contested in French court an earlier decision by the FFE, but the decision by FIDE’s Ethics Committee gets around any legal loop-holes because it is based on sports law.
The case is all the more remarkable because it was the FFE (and not FIDE) that first exposed the incident, all stemming from a cellular telephone that Marzolo had borrowed from the then Vice-President of the FFE.  The decision is a first in the chess world, and the length of the suspension will likely serve to discourage others who try to use the latest technologies to mask efforts to cheat.
SPRAGGETT  ON  CHESS
Share