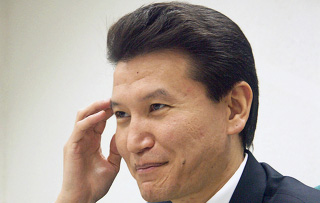 There never was any doubt!   Turkey will host the 2012 Olympiad regardless of any scandal, earthquake or tsunami between then and now.  Kirsan Ilyumzhinov has made clear that ” as long as I am the President of FIDE, nobody may take away the 40th Chess Olympiad from Istanbul.”  The text of the letter can be found below.

LETTER FROM FIDE PRESIDENT KIRSAN ILYUMZHINOV
”Yesterday, I was informed about a blog published in the New York Times written by by Mr. Dylan Loeb McClain.
The 2012 World Chess Olympiad was given to Istanbul in Dresden in November 2008 by 90 votes against 45 votes which reflect the big majority of the FIDE General Assembly.
The Turkish Chess Federation has one of the best management teams among the 171 members of the FIDE family. We always use the TCF, and its leadership, as a model and best example for chess development in the world. The TCF has organised more than 140 international events under the leadership of our colleague, Mr. Ali Nihat Yazici, an immeasurable amount of World and European championships in the last 10 years.
I place my trust fully in the leader of the Turkish Chess Federation, Mr. Yazici. That is the reason I nominated him not only to the position of Vice President of FIDE, but additionally to the position of Chairman of Chess in Schools Commission.
I have been informed that today and yesterday in Turkish Media some newspapers used the article published in NYT and they claim that the 2012 Istanbul World Chess Olympiad is under inspection. This completely untrue, and as long as I am the President of FIDE, nobody may take away the 40th Chess Olympiad from Istanbul.
The reason that the FIDE GA in Dresden granted the 40th Chess Olympiad to Istanbul was not only the excellent and honest Campaign run by the TCF in 2008, but also, the incredible support of Turkish Government, Istanbul Metropolitan Municipality and Is Bankasi. We are confident that the Olympiad in Istanbul will be one of the best organised Olympiads in chess history.
I may assure you that Mr. Yazici has always conducted himself in an exemplary manner and the campaigns by the TCF for various tournaments were always at the highest level possible.”
I want to clearly express this for all the world chess media and Turkish Media to clarify my comments in the article mentioned above.
I understand that the timing of that news published in the world and in Turkey is very much related to the financial general assembly of the Turkish Chess Federation on the 27th November 2010. I give my full support to the outstanding and excellent leader of Turkish Chess, Mr.Yazici.
_________________________________________________________
SPRAGGETT ON CHESS
Share